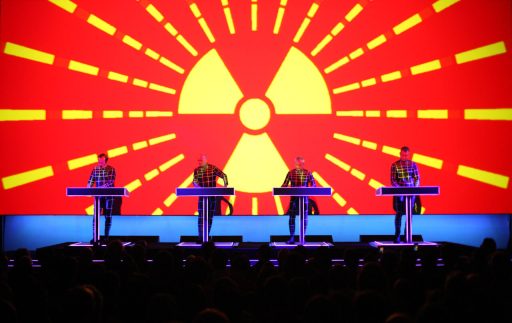 Few bands can be called Iconic.  Kraftwerk certainly should be.  The band has not only survived half a century, its influence on electronic/techno music cannot be overstated.  Nowadays we take for granted so many of the studio tricks that allow the blending of human and machine music.  In 1970, none of that existed.

It didn’t stop Ralf Hutter and Florian Schneider from creating their vision.  Their Dusseldorf base of operations, Kling Klang Studios, became the epicenter of the electronic scene.  From Bowie to the European Dance Hall, the California Rave to Hip Hop, Pink Floyd to The Cars to Devo.  None of it happens without Kraftwerk planting the seed.

A lot of fans and critics have known that for years.  It may have taken 7 tries to finally be inducted into the Rock and Roll Hall of Fame, but in 2021 Kraftwerk finally was honored in the way it was due.

Expect an extravaganza, well outside the 9 dots.  You can join the other adventurous fans as we all have Fun Fun Fun On The Autobahn.

Guitar-Stringer Comes To Town. Jimmie Vaughan At The Dakota

For the 40th or 50th time I want to begin by saying how much I love shows at The Dakota.  Heading in for a remarkable, ever changing menu followed by a world class performer in […]

Former YES and Vangelis front man Jon Anderson will appear at The Fitzgerald Theater in St Paul on April 24.  Details and Tickets can be found HERE. It is safe to say that Anderson is one […]

Mercury Prize winners Wolf Alice will appear at The Fine Line.  At this time, a few tickets may remain.  Details can be found HERE. Wolf Alice is one of those bands that achieved immediate success […]