Many of the live music options for this Saturday have one thing in common – rather insane ticket prices and a crowd that may be a bit more stuffy than usual. But fear not – The Skyway got you covered! Producer Gramatik is headlining cast that should be right up every dance fan’s alley with support from Haywyre, Møme & Balkan Bump. Tickets are $ 25 (which may get you a couple of Tortilla chips at a certain downtown restaurant) and available HERE

After completing his epic Re:Coil EU Tour across 26 European cities in the fall of last year, Slovenian-born producer Gramatik is gearing up to bring the tour to North America this year. Starting in February, he’ll hop back on the tour bus for a two-month Re:Coil US Tour, visiting well over 30 cities all around the country.

Before going into details it is worth revisiting why the EU leg of the tour was so special. First of all, Gramatik released his new EP, “Re:Coil Part I,” at the legendary Paris venue Le Zenith. The response has been incredible as critics and peers praised his ability to continuously evolve his unique sound.  Furthermore, during the show in Zürich on November 9th, he made history as he became the first musician to launch his own token GRMTK in collaboration with SingularDTV; a revolutionary new approach that promises a convergence of network and data that will allow creators to bypass gatekeepers and intermediaries and seize control of their intellectual property. The full goal was reached within 24 hours, and all together, 7,500 ETH (equivalent to $3.09 million at present time) were raised without hardly breaking a sweat, signalling that people are open to new distribution models.

With that said, Gramatik won’t be taking too much time to rest on his laurels. On February 1st, the Re:Coil US Tour will begin in Detroit, Michigan with support from keyboard maestro Haywyre and Balkan Bump. A classically trained protégé of Monstercat Records, Haywyre has been astounding the musical world with his incredible blend of electronic genres like dubstep and glitch hop with classical and jazz piano training for a while now. He made a breakthrough with 2014 album “Two Fold Pt. 1” and a live rendition of Michael Jackson’s “Smooth Criminal” that went viral. “Two Fold Pt. 2” followed in 2016 and further established him as one of the most promising young talents out there. He will be joining Gramatik for around half of the shows, while for the other half of the tour, his spot will be filled by French bon vivant, Møme.

Originally from Nice, France, Møme moved to Australia around 2015 and when not surfing the waves, he likes nothing more than composing on the go in his van, which he remodelled into a recording studio. He too studied music from young age, but has found that electronic music suits him better than playing in a band and after signing with Parisian label DDM, he has released two excellent EPs (“Cosmopolitan”, “Aloha”) and an album titled, Panorama.

Balkan Bump, the rebranded project from trumpet player/producer Will Magid, will be joining Gramatik on every tour date. Will is an ethnomusicologist who has been gathering inspiration for his music on all continents, save for Antarctica. A set of his compositions can take you to a Cuban beach, a West African wedding party or a Serbian night club, all within 15 minutes. The musical pieces he is putting out are buoyant jams packed with rich layers of celebratory horns, bouncing percussion, classical strings and even a bit of ambient noise. In the past Will has performed with artists including Pretty Lights, Beats Antique and Bonobo, but is now focusing on his solo music. With such high-profile artists providing support, it feels pretty safe to say the Re:Coil US Tour will be just as epic as the European tour that preceded it. 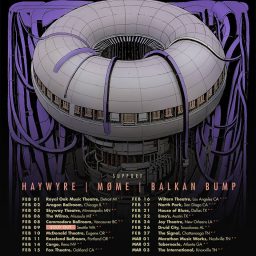