The collaboration of Franz Ferdinand and Sparks made its way to First Avenue on Friday night and FFS was laying the steez on thick.

Much like classic Franz Ferdinand there seemed to be a Vaudevillian theater tone in the lead singers vocals. Both Russell Mael (donning a striped poncho) and Alex Kapranos often barked lyrics out like captains of a sea vessel. The collaboration had a fantastical edge that was built from very specific details throughout. Keyboardist (and Russel’s brother) Ron Mael’s stoic and mannequin-like stage presence was a show within itself. Kapranos and Mael had ultramodern dance moves, but your eyes always drifted back to the skeleton like keyboardist with slicked hair. He fell into the uncanny valley. You knew that he really was a human, but his commitment to the lack of emotion was impressive and unnerving. He maintained that persona the whole set, except when the front men stepped aside and Ron delighted the crowd with a jaunty dance break on center stage. 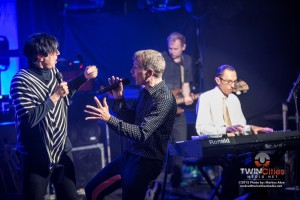 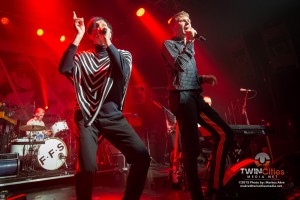 Towards the end of the FFS changed the tone with “Collaborations Don’t Work”. The song may be damning the same kind of musical alliance that is FFS, but the union of Franz Ferdinand and Sparks is inspired. Both bands have similarities when they are viewed from a distance, but when they are literally side-by-side the differences are apparent. The diverse set consisted of songs from all three bands. Franz Ferdinand’s original songs were given new life with the addition of Sparks. Somehow the sound was fuller and even catchier. Classic FF songs like “Take Me Out” and “Do You Want To” had small guitar details that gave the songs new life. There was also a healthy competition going on between front men. This gave playfulness to their stage presence. It made each one work harder on their individual styles on stage, but they weren’t fazed by it whatsoever. The whole show was built on confidence and professionalism. From the moment they walked on stage they held themselves as performers. If their poise had wavered one bit, it would have lessened the effect, but they just knew what they were doing and it was always exciting to watch. This was a show that you never wanted to end. There were no lulls or dead points as every song was danceable and entertaining. FFS even tried to feign ending the night, but they knew they were coming back out; the show was to good to end. This really was the best show that I have seen in a very long time.

Set List:
Johnny Delusional
The Man Without A Tan
Police Encounters
Do You Want To – FF
The Power Couple
Little Guy From The Suburbs
Save Me from Myself
Things I Won’t Get
So Desu Ne
The Number One Song in Heaven – Sparks
Michael – FF
This Town Ain’t Big Enough for Both of Us – Sparks
Dictator’s Son
Take Me Out – FF
Piss Off
Encore:
When Do I Get to Sing “My Way” – Sparks
Call Girl
Collaborations Don’t Work

After my “unusual”  weekend at The Eaux Claires festival, I was ready for a show that I could enjoy in a place that feels like home. The fact that I was about to see true […]

A Thursday Night Of Intrigue- Daughters Impresses At Turf Club

Abisha Uhl Kicks-off ‘Uhl Be Fine Tour’ at The Amsterdam

Once again Friday night was chalked full of great live music happening around the Twin Cities. As pretty much every weekend, there was no shortage of shows to catch. However, I found myself across the […]