As the week came to a close, I took the journey south from Minneapolis to Mankato to catch Alice Cooper and Shannon Curfman at the Vetter Stone Amphitheater. With the sun dipping down below the western horizon, it was time for the music to kick into action.

Opening the evening was Shannon Curfman with a very impressive hard-driving rock and blues set. At 31 years old, Curfman is already a veteran performer who has shared the stage with legends including B.B. King, Buddy Guy, John Mellencamp and Santana, and has recorded with John Mayall, Billy Preston and Keb’ Mo. Curfman released her first CD when she was just 14-years-old. Titled, “Loud Guitars, Big Suspicions,” the album rose to the number three spot on the Billboard Blues Chart. With age and experience, Curfman’s music has evolved towards rock and roll. She definitely did not hold back. Song after song, Curfman took command of the guitar making it sing as stellar as her voice. Even a cover of Ted Nugent’s Stranglehold was riveting and flawless.

After a short break to prep the stage it was time for Alice Cooper. There was a definite buzz in the air of anticipation (myself included). Then Alice Cooper took the stage and all manner of mayhem broke loose. The band’s opener “Brutal Planet” pounded at the peace with a rather indistinct contemporary metal groove, grinding mechanically around a few riffs and a streamlined bass line. It provided the ever present evidence for the Cooper’s considerable influence on the metal genre. 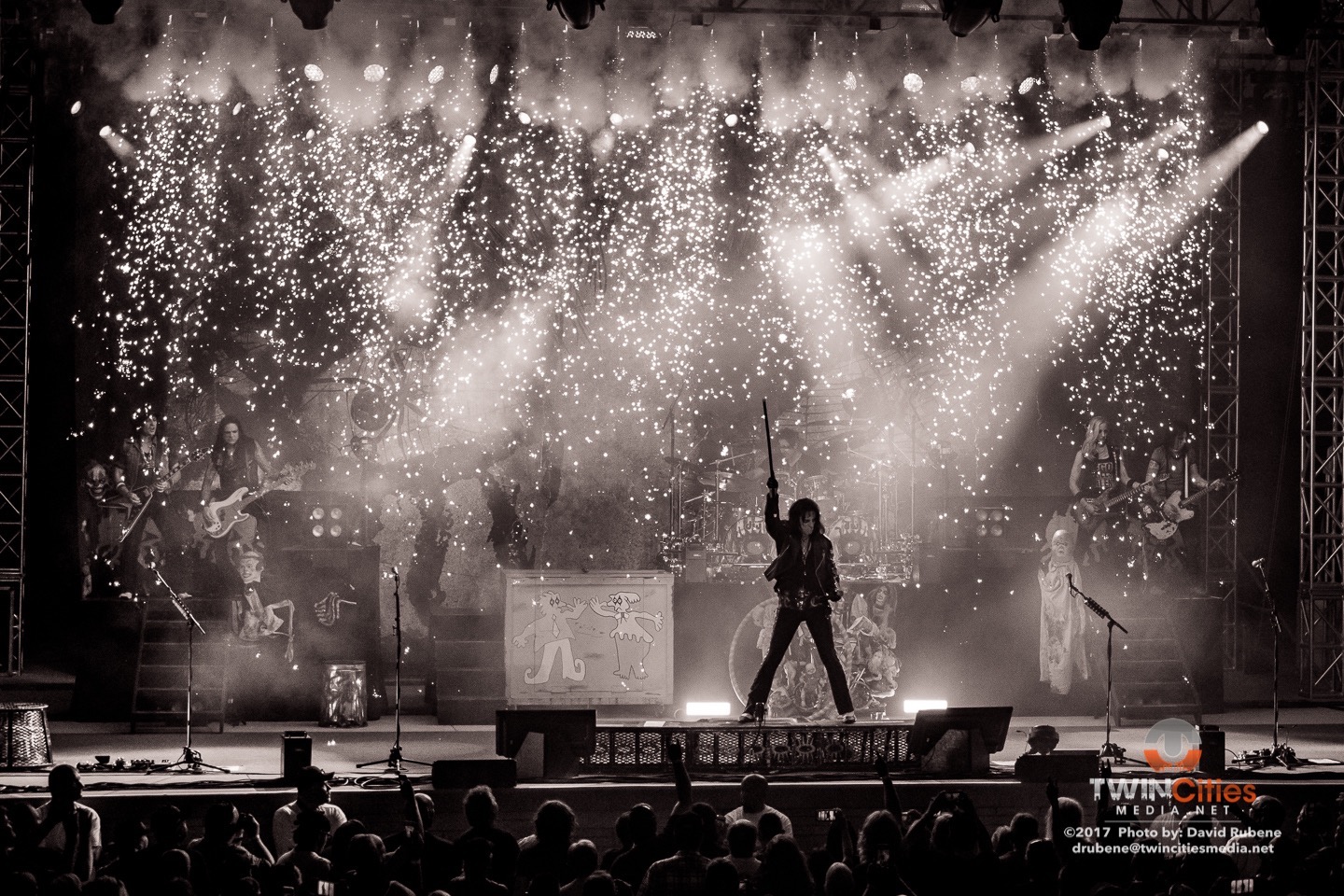 The band continued to roll through “No More Mr. Nice Guy,” “Under My Wheels,” “Billion Dollar Babies,” and “Welcome To My Nightmare,” with ease and genuine strong and favorable response from the nicely packed venue. But there were to be many more, bigger hits, songs that helped define more than one decade. Songs that continue to resonate in a pop culture obsessed with zombies, vampires and killers … the classics … and all pure Alice Cooper.

Alice has a killer band that is able to rock the house and perform at their best. At the epicenter of the pounding groove, was bassist Chuck Garric and drummer Glen Sobel; as importantly, the buzz-saw rock was fueled by guitarists Ryan Roxie, Tommy Henriksen, and Nita Strauss. Strauss delivered an extended solo before “Poison” that literally left the crowd in utter amazement. 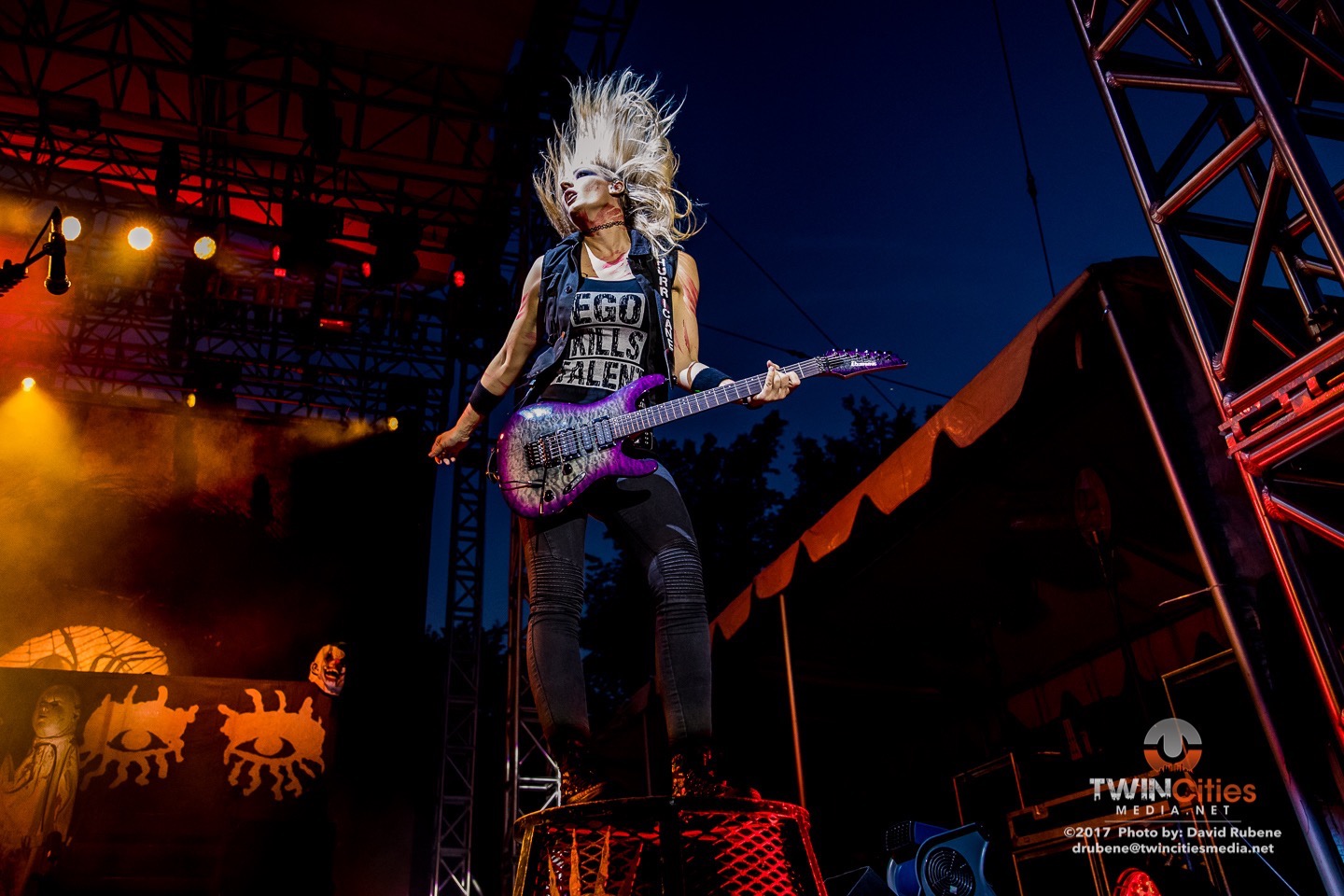 If the solid rock-and-roll delivered by the band along with Alice’s gruff, extremely-potent singing keeps the show grounded, the theatrical nature of the performance provides a considerable ‘icing on the cake’. My favorite of the evening was “Feed My Frankenstein” which featured Alice mounted on an operating table, fried with electricity and then reborn as a hulking monster. A sequence of songs beginning with “Only Women Bleed,” wherein the singer kills his lover, continued with his incarceration in an asylum during “Ballad Of Dwight Fry” and his execution by guillotine — enacted expertly. As the arcane execution machine was rolled to center stage, the crowd raved, as if cheering the beheading of an ancient Scottish queen.

As Alice wrapped up the performance with “I’m Eighteen”, the crowd throughout the venue were on their feet. With loud and constant cheers, Alice returned to the stage of the epic “School’s Out”, which put a grand and final closure to an impressive evening.

Despite the impression we may have gotten from the (hopefully) final, final Motley Crue show at the Xcel earlier this week, it is possible for Rock Bands to mature gracefully. Case in point: Social Distortion. […]

After sitting in traffic for forty five minutes to go under ten miles, I was happy when I arrived at The Cabooze. The door guy gave me a wristband as he welcomed me back to […]