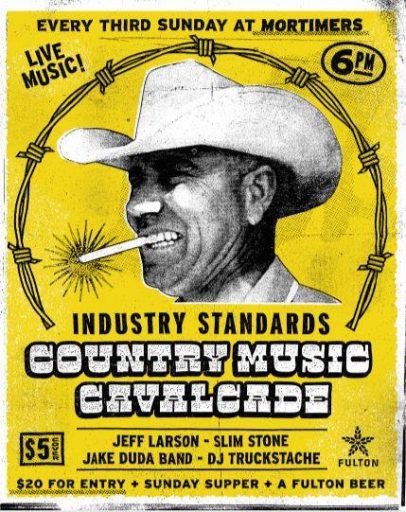 Every 3rd Sunday Night at Mortimer’s Bar in Uptown MPLS, $5 entrance or $20 gets you in the show, plus plate of chef crafted food and an ice cold draft Fulton Beer.

Anchored by the Jake Duda Band – bringing you country sounds with bluegrass rhythm. The old timers call it new-grass, the kids mistake it for Willie or Townes, Slim Stone – caterwauling that rockabilly swagger with his pal Rico, a nashville quality guitarist who simultaneously plays drums as his backup band, and the Jeffrey Robert Larson Band – the best honky tonk this side of 1973 with one of the best steel men in town. Plus, DJ Truckstache spinning classic country 45s between bands all night long. There’s a good chance they’ll all be there, but you never know who might stop down to sit in.

Guster at Music in the Zoo – TICKETS

Ever since their humble beginnings at Tufts University, Guster have always sought to outdo themselves. They sell out New York’s fabled Radio City Music Hall one year and perform with the Boston Pops at Symphony Hall the next. They sell out a 33-date college tour, and recently founded the eco-friendly Campus Consciousness Tour, with buses powered by biodiesel and performances powered by wind power. It’s in this overachieving band’s nature to one-up itself. 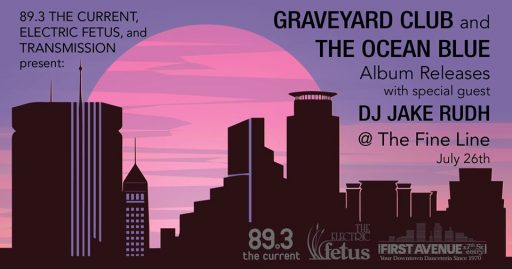 How cool is this show going to be? They got DJ Jake Rudh – ’nuff said! 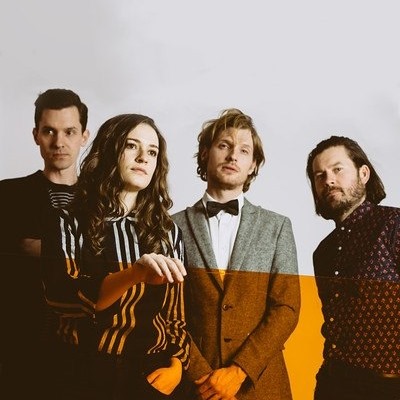 Graveyard Club recorded a collection of haunted, synth-laden songs in a 19th century mansion in St. Paul, Minnesota in the fall of 2013. These songs would comprise the group’s lo-fi debut EP Sleepwalk, released in January 2014. Founding members Matthew Schufman (vocals, synths) and Michael Wojtalewicz (guitar) began the project inspired by a unique list of shared interests: the classic short stories of sci-fi author Ray Bradbury, the music of Ryan Gosling’s little-known band Dead Man’s Bones, and a fascination with both 50’s crooners and 80’s pop music.

By the spring of 2014, the band had expanded to include members Cory Jacobs (drums) and Amanda Zimmerman (bass, vocals). The newly bolstered lineup resulted in a more dynamic sound, adding a brighter dance-friendly feel to the spooky retro vibes of their earlier work. The four-piece then teamed with Ed Ackerson at Flowers Studio in Minneapolis to record their first full-length album, Nightingale. This release saw singles “Into the Dark,” “The Night is Mine,” and “Fire in the Sky” quickly become fan-favorites. During this time the band also began establishing a reputation for their live shows around the Twin Cities and surrounding areas, including playing supporting slots for various indie acts such as The Drums and Cayucas. 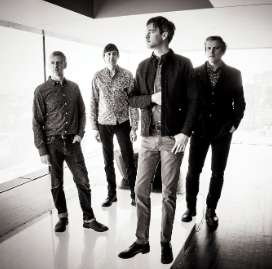 The Ocean Blue just released their 1st album in over 6 years and are coming to Minneapolis (where frontman David now lives) to celebrate with a show at The Fine Line with The Graveyard Club. The album, Kings and Queens / Knaves and Thieves came out on Korda Records, including singles “Kings and Queens”, “All The Way Blue” and “It Takes So Long”.

You may know the band from their 1989 debut with songs like “Between Something and Nothing” on Sire Records (Madonna, The Cure, The Smiths, Talking Heads, the Ramones, etc) – the four teenagers from Hershey, PA had widespread acclaim, Top 10 Modern Rock/College Radio & MTV airplay…And now they’ve returned with the signature atmospheric new wave sound, jangly guitars and lush keyboards that are back in music again.

The Ocean Blue arrived as the 1980s drew to close, and their debut record on the famed Sire Records label in 1989 seemed to summarize the best of the musical decade. The band of four teenagers from Hershey, Pennsylvania quickly achieved widespread acclaim and radio & MTV airplay, with top 10 Modern Rock/College Radio hits like Between Something and Nothing and Drifting, Falling. They followed their debut release with the subtle and atmospheric Cerulean, which included perhaps their most beloved song, Ballerina Out of Control, and followed that with their highest charting pop album Beneath the Rhythm and Sound and the single Sublime, featuring a video of the band in the sublime landscape of Iceland.

Summer sizzles as The Great Midwest Rib Fest returns with three days of food, music and fun! Get your groove on with free outdoor concerts. Bib up and chow down on ribs from 10 top pitmasters competing for thousands in prizes. You’ll also find beverage and bar tents, fresh lemonade, Kernel’s Sweet Corn, Cookies and More, Ben & Jerry’s® ice cream and more! So much yum under the sun.

Cloak at the Entry – TICKETS

Atlanta, Georgia in the Deep South of the USA is probably not among the cities named as first suspects for a black metal influenced rock band to emerge. Yet there at the crossing of two old American railroad lines, CLOAK were conceived in the year 2013. Their debut full-length, To Venomous Depths (2017), is simply a perfect amalgamation of Nordic black metal with catchy hooks and melodic rock. And while the Americans are not claiming to be reinventing the wheel, their outstanding song-writing is catapulting this album to the top.

CLOAK have named DISSECTION, DEEP PURPLE, and FIELDS OF THE NEPHILIM as main influences, but their harsh yet groove-fuelled sound has invited critics to draw comparisons with such acts as TRIBULATION, WATAIN, and YOUNG AND IN THE WAY.

After spending two years in the rehearsal room carefully preparing their material, CLOAK released a first sign of life in the shape of Demo 2015, which created an audible buzz in the US underground. A two-track, self-titled EP followed in 2016, gaining the Americans worldwide attention and critical acclaim. In their short time of existence, CLOAK have already shared stages with renowned acts such as WOLVES IN THE THRONE ROOM, WINDHAND, INTER ARMA, SATAN, and TAAKE.

It will not take CLOAK long to capture your interest, but with each new spin To Venomous Depths will reveal new details that make their discovery worthwhile. There are no fillers on this debut album, just hits. Let’s rock this cool darkness!