Minnesota’s Amanda Grace is part of the women’s folk rock band Wildflower but also an accomplished solo artist. She is about to release her new album “Better Life” and will celebrate with a release show at the Warming House on 12/6. Tickets are available HERE

Amanda does not claim a particular genre of music, and in doing so enjoys variety in her music and audiences. As a solo artist and a part of a women’s contemporary folk band called Wildflower; she is a performer not to be missed.

After attending Winona State University she began a more intentional look at returning to music after her nephew was diagnosed with leukemia. In 2010 she released a children’s album called, “Trains, Cars + A Trip To Mars.” Soon after his father also passed away. Amanda wrote some songs from the experience and released, “Embrace” in 2012. 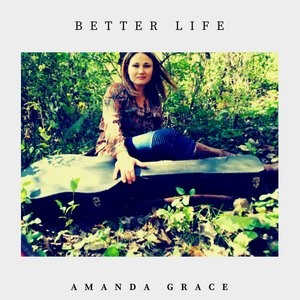 “Better Life”  is a fierce sequence of alternative pop tracks. Amanda is a singer/songwriter who performs for a variety of ages and with a women’s folk band called Wildflower. Her early albums were influenced by the loss of her nephew and his father. “Better Life” is her fourth work and is undoubtedly her most poignant work yet. Wanting to live an engaged life by keeping close to kin, Amanda took a track by track approach in the studio with production focusing on creating distinct clarity in her vocal delivery. “Better Life” and “Cold” have a unique time signature interplay that captivates the listener while building anticipation to and through the robust choruses.