Alessia Cara recently released her six-song EP, This Summer, that was written about experiences she had over the summer while touring with Shawn Mendes. It was only last November when she released her 15-song album The Pains of Growing which also featured her soulful brand of pop music. The 23-year-old Canadian now brings The Pains of Growing Tour to Prior Lake’s Mystic Lake Casino on Friday November 1st. The show will begin promptly at 7:30pm and will feature blues-rocker Craig Stickland as the opening act. Mystic Lake reminds you that you must be 18 or older to enter the casino or attend shows unless accompanied by a parent or guardian. Make sure you are one of the lucky ones attending this popular Friday night show by getting your tickets HERE.

“Three years before I performed on The Tonight Show with Jimmy Fallon, I visited NBC Studios with my high school drama club. We toured the Tonight Show set. I remember the guide not letting me touch Jimmy’s desk. So I ran to his monologue mark –the little X he stands on when he delivers the monologue– and told myself ‘I’m going to be here one day.’ I shared this story with Jimmy when I first performed on his show. He walked me to the monologue mark and said, ‘Alessia, you’ve made it.’ It proved to me that all of my dreams are valid.” [The following video from a more recent appearance on the Tonight Show will instantly make you an Alessia Cara fan (and Jimmy Fallon fan), if you are not already.]

For once, Alessia Cara’s voice betrays her; it breaks in the anecdote’s retelling. And why not? The unassuming 23-year-old from Brampton, Ontario has captured the hearts and minds of listeners worldwide: four JUNO [Canadian Music Award] nominations in 2016, including a win for Breakthrough Artist of the Year; a tour with Coldplay; a performance with Taylor Swift after which Taylor proclaimed herself an Alessia fan; the cover of Billboard Magazine’s Grammy issue; a 2016 AMA nomination for New Artist of the Year.

From drama club to the inner circle. From yearbooks to year-end Best Of lists. From wide-eyed high-schooler to blushing ingénue to reimagined pop star.

“It’s kind of ironic,” Alessia waxes, hours before she takes the stage at New York’s iconic Radio City Music Hall—a stop on her Know-It-All: Part 2 tour. “My pride in not having a brand has become my brand.” Indeed, Alessia has found the most precious of spaces, the thing many artists agitate for their entire careers: a niche. She is, by her own admission, “a regular person who makes songs. There’s nothing glamorous about me.” Relatability has become her calling card, first imprinted by the improbable smash single, “Here.”

The musings of a disenchanted teenage partygoer who longs not for popularity but for the couch and comfy clothes, “Here” struck a chord with fans delighted to see a kindred spirit elevated to star. On the song’s genesis and the ethos of her debut album, Know-It-All: “As an unknown, I didn’t know what to expect. All I had to go on was A) my gut instinct and B) how I wanted to be represented. ‘Here’ showed my perspective and personality and I was comfortable with the song speaking for me. I would rather completely fail and be myself than succeed and be someone I hate. The album title was tongue-in-cheek. Just my stubborn self speaking on what I presume to know about the world; that doesn’t necessarily make it true. So I never thought so many different people, of all ages and backgrounds and situations, would relate to my music.”

Relate they have. Alessia recounts that a listener approached her at a radio station meet-and-greet and confided in her that she, the listener, would be coming out of the closet. Further, it was Alessia’s music that had given her the courage to embrace her true self. This girl had yet to share the news even with her family; Alessia was the first to know. Alessia Cara is registering a lot of firsts.

The fan had been moved by “Scars to Your Beautiful,” Alessia’s gut-wrenching take on female identity, on body image, on deleterious behaviors in the name of beauty. Alessia walks listeners through heartache but concludes with strains of promise: “So to all the girls that’s hurting/ Let me be your mirror, help you see a little bit clearer” and the touching refrain: “There’s a hope that’s waiting for you in the dark / You should know you’re beautiful just the way you are.”

The words arrive with a poise and poignancy that belie her years. And they soar over a rousing drum track, one which Alessia thumps out during her live show. In fact, the lyrics have transcended the liner notes to become manifesto. Alessia has partnered with I AM THAT GIRL, a national initiative to empower young women. “Scars to Your Beautiful” serves as IATG’s anthem and also underpins the organization’s curriculum: five talking points, each culled from a song lyric, aim to bring women together in a community of self-love.

“The timing is perfect to spearhead to such an important movement,” Alessia states emphatically. “I’ve never set out to be a cause, but it’s been a label applied to me because I’m a girl who believes in a lot and has a lot to say. And IATG really hits close to home. Lately, I’ve been getting flak for how I look and how I dress. What’s most frustrating is that many of these comments come from other women. It speaks to how brainwashed we all are and just how much of a need there is for these kinds of conversations. I’m pushing this idea of being yourself; who cares what shoes I have on? How does that affect how talented I am? Capable I am? Smart I am? The art I make? If you can listen to me and enjoy what I do without worrying about how I look, then maybe we all need to recalibrate our expectations. It’s not about being easy on the eyes. It’s about being smart and ambitious and thought-provoking.”

Alessia Cara has certainly given us reason to think but also cause to rejoice. Having crisscrossed Europe, she’s currently making America’s stages her pulpit on the Know It All: Part 2 tour, her brainchild: “I’m so proud of this tour. I conceptualized everything down to the minute details. I didn’t want to just give people the album. I wanted to challenge myself vocally and creatively. I wanted to give them an experience.” It is very much an experience unlike any other—disarming, endearing, wholly intimate. The quiet moments between songs are to be savored equally: Alessia interjects uplift, confessionals, life lessons, vignettes about navigating fame. She narrates a video loop celebrating a woman-centric message. All the while, she seems as wowed and grateful as the listeners staring back at her. “I hope the fans know that I’m figuring things out, too,” she confesses. “I think when you look up to someone, you expect them to do everything right. We’re all people with feelings and I’m trying to make sense of everyday things. I mean, I still get weirded out hearing my own music.”

Alessia Cara manages to own the dichotomy of understated pop star. The big voice in the small frame. The small town charm gracing big city stages. Perfection in imperfection. The irrepressible smile and the timeless message that we all have something to offer. Alessia Cara has invited us all in. “I’ll be over here,” she reminds us. And we’re all rushing to meet her.

Here is Cara’s most recent video for “October” from her This Summer EP.  She describes the song being about the feeling of fall being the “death” of summer and not wanting her summer to come to an end. The music video features behind-the-scenes footage taken over the course of the summer tour with Shawn Mendes. 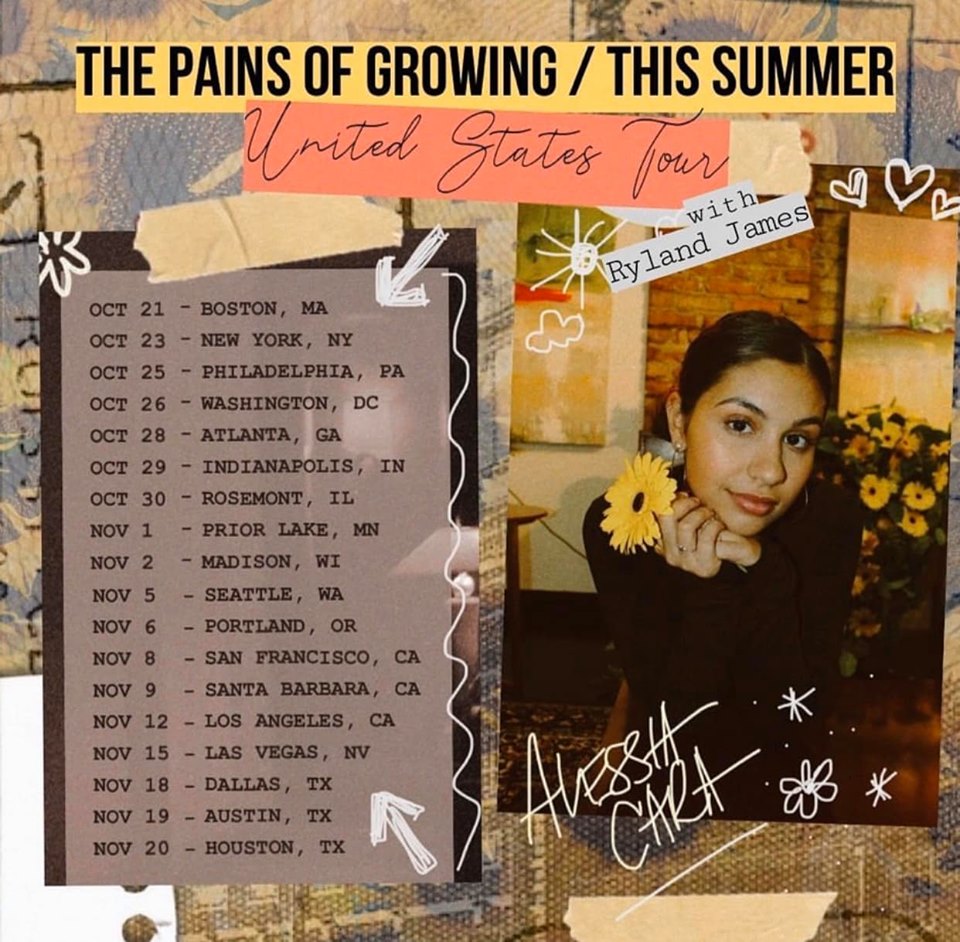 By dusting off an old novel or playing a classic film, you encounter restless creativity, unquenchable wanderlust and adventurous spirit. The same feeling resonates upon spinning a Craig Stickland album. His 2019 second full-length, Starlit Afternoon (21 Entertainment/Entertainment One), catalogs and collates an unbelievable two years crisscrossing North America in a converted, sustainable Sprinter Van in between performing live in front of millions as guitarist for multiplatinum superstar Alessia Cara and touring for his own project.

Along the way, he wrote, recorded, and self-produced the twelve tracks comprising the album. Throughout the trip, he merges vivid singer-songwriter sensibility bluesy bombast and rock ‘n’ roll energy, igniting a singular sound. Carried by his robust, soulful howl, inventive instrumentation, and diaristic lyricism, the music plays out with all of the drama, daring, and discovery of a life-changing road trip.

“I’ve lived in my van for the past two-and-a-half years,” he affirms. “I’ve been on the road, camping in national parks, and I’ve been out there doing it.” Accompanying the studio takes, he tracked the Van Sessions live, a series of stripped-down, acoustic performances shot and recorded at Yosemite, Joshua Tree, Alabama Hills, and Downtown Los Angeles. Stickland’s story and spirit prove instantly impactful and memorable. “Everything on this project is about an experience I’ve had. Starlit Afternoon is the story of the world through my eyes.”

Even with the blizzard that stormed through the Twin Cities a couple of nights ago, live music thrived over the weekend, not missing a beat.  The cold didn’t shy anyone from lining up and around The […]

Chicago-based quartet Ne-Hi is bringing their tour to Minneapolis, next Saturday 4/15. Ne-Hi is set to play the iconic 7th Street Entry and tickets are only $10 in advance, and $12 at the door. Save […]

Lee Brice singer / songwriter from South Carolina will thrilled fans Saturday night at the Myth. Lee is currently touring in support of his latest self titled album “Lee Brice” that was released November of […]