If I’m being completely honest, I accepted AfterTime’s new album ‘The Farthest Shore’ as a review submission, but I really didn’t know how well the review would play out. Nothing against the band members, but I feared that that there was going to be disappointment. That being said, they are a local Twin Cities band and those bands will always come first when it comes to Twin Cities Media. I tied my hair up, poured another cup of coffee, and hit play with an optimistic and open mind. 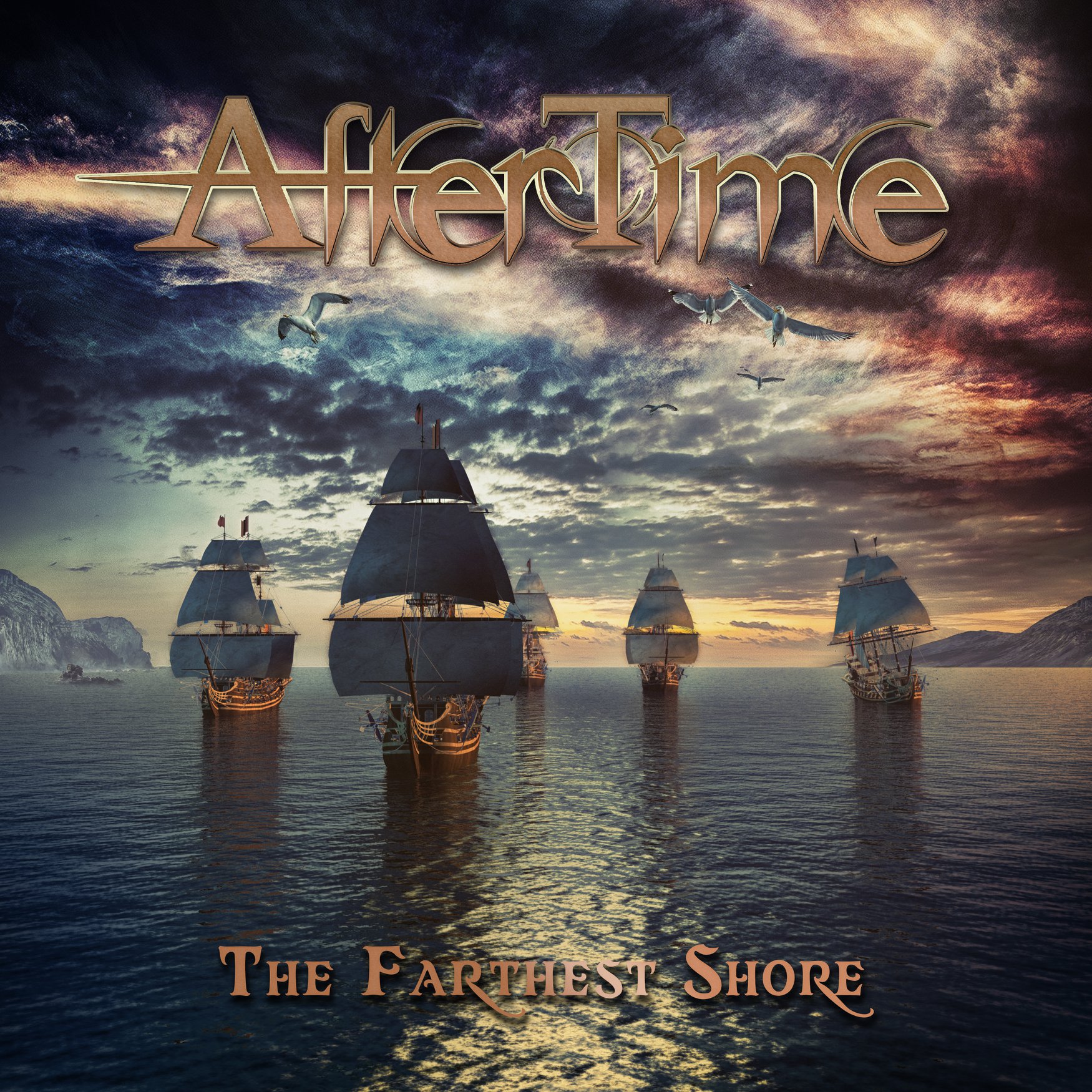 “Battle of the Sea” kicks this symphonic metal album off with a hint of drama. The track starts with the sound of waves which, had it not been for my coffee, probably would have put me to sleep. CRASH! That’s when it happened. At just under a minute in, I was swept out of my dreamland and into the middle of a, for lack of a better term, “Battle of the Sea”. Although I had these guys pegged as a kind of low-budget symphonic metal band, this opening track proved to me that they are so much more than that and have absolutely put the work and grind in to become a name that belongs among the likes of Nightwish and Epica. The cinematic elements of this track make the nearly nine-minute song fly by and, before I knew it, I was moving onto “Edge of the Earth”.

Although still just as symphonic and cinematic, vocalist Sarah Wolf seems to take a warmer approach to the words. They are beautiful laid out as the instrumentation rages on behind her. The addition of a choral sound behind her voice at times brings a certain amount of depth to this track that can only be described as “goosebump-inducing”. It’s those vocals that kick off “World We’ve Lost” in the best way possible. Everything about these songs screams power but also a sense of delicacy as far as the way the tracks are put together and treated by the musicians. Guitars that I can only describe as Dragonforce-Esque (not sorry about that one– my knowledge of guitar work begins and ends with Guitar Hero) come in and take the spotlight before falling out and giving Sarah’s voice the much-deserved spotlight. You really get a taste of the incredible range of this woman’s voice on this track and it was an instant favorite of mine.

“Nimata Moirais” brings back the ship theme with a beautiful string part that ushers in the rest of the band. One thing that I’ve never really loved about this band is the vocals. Although there is no denying the range of Sarah’s voice, it has always just fallen flat for me when it comes to their live show. That thought changed while listening to this track. You really hear just how talented she is and how versatile her voice is. The articulation of each word is impressive. There’s so much going on in this song but there’s never a moment where my ears weren’t catching her words.

Things slow down a bit for “Planetary Eyes”. This beautiful track starts off sounding like a ballad before the drums, guitar, and bass come storming in but, even with the addition of the rest of the band, there’s something slow and steady about this track that makes it stand out from the rest. There’s also something a little bit more musical about it. It was easy to close my eyes and see scenes from an epic scene in a movie play in my mind. Think Little Red Riding Hood fleeing into the woods. Why is that the image in my head? No clue. But you listen to this track and you tell me what pops into your head!

“Sanctuary” surprised me when it brought things down even more. There’s no other word to use to describe this piece than “stunning”. This album has been so epic so far that this track sitting halfway through it is a smart move. It gave me a minute to catch my breath before the album moved on to “Dare To Roam”. This track definitely doesn’t skip a beat when it comes to bringing back the cinematic sound this band is clearly so good at doing. Epic fight scenes played in my head as this song played through and I was so lost in my head that I almost didn’t realize that the album had moved onto the eighth track.

The acoustic guitar that kicks off “A Journey Itself” is a brand new aspect brought to this album, but a good one at that. Again, I love that each song is so cinematic but each one plays a different scene out in your head. This track is a great example of that. Instead of dark and booming, this one has a sense of whimsy to it that I absolutely loved. The dark and booing mood that AfterTime does so well comes back into play with “Survive The Storm”. The beat and instrumentation of this track are hurried and frantic but that feeling matches the lyrics perfectly.

“The Aftermath” is a triumphant piece with some of the most beautiful rises and falls I’ve heard in some time. Again, the drama is strong with this band and this track shows that off. “No Turning Back” continues with the triumphant feel and, as the second to last track, it was perfect. Although some artists would take the last few tracks to slow things down and really just put a period on an album, AfterTime has chosen to continue to build and continue to bring an undeniable wow factor until the bitter end of this album.

The title track, “The Farthest Shore”, closes this album off. Although this entire album is incredibly cinematic, this closing track is a movie in itself. At over thirteen minutes long, this track comes chock-full of everything you could ever ask for. Drama, epic-ness, darkness, brightness, slow, fast, calm, whimsy, did I mention drama? There’s no end for this album and, as the waves that end “The Farthest Shore” faded out into silence, I couldn’t help myself from starting this epic journey all over again.

Yeah, I wasn’t excited to review this one but I committed to it (probably after a couple of glasses of wine) and I will always support local. I was honestly prepared to use my “they are good at what they do, I just hate what they do” line but that’s not needed in this review at all. What an epic piece of music. No other words. JUST EPIC! I’m sorry I ever doubted this band!

The release is now available for purchase through digital outlets and is streaming online. Visit AfterTimeShop to order your copy today. For all the latest information, news, and upcoming performance dates, be sure to visit AfterTime’s website and Facebook page.

Sunday night shows set the tone for my week. If it’s a bad show, I tend to have a not so great week but, if it’s an amazing show, I’m sure to have an awesome […]