It would have been so easy to just chalk the weekend up to a washout. Seriously. With non-stop rain and abnormally cold (even for Minnesota) temperatures, it was a great weekend to just stay inside and get stuff done at home so naturally, my photographer and I loaded up his car and made the short trek to Alexandria, Minnesota for the weekend. A concert with a great cause (the event is called Mosh Out Suicide and the proceeds go to The American Foundation of Suicide Prevention) and a line-up of some of the best local metal bands… who was I to say no? 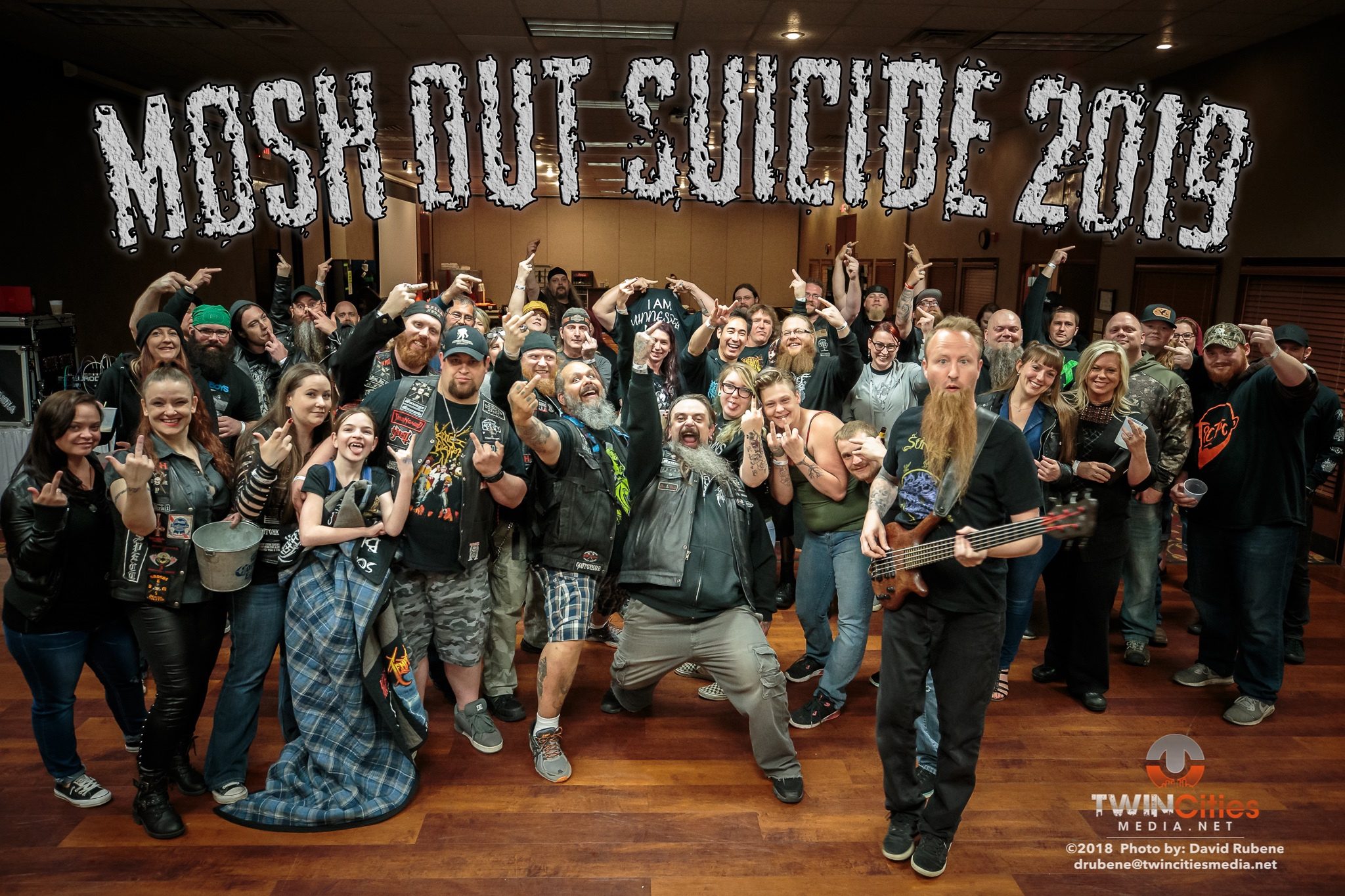 The two day festival was held at the Holiday Inn in Alexandria. A bit of a strange venue for a show like this what with the two weddings going on at the hotel at the same time, it was also the most perfect place. Majority of the bands and audience had rooms for the weekend giving the festival a very vacation-y feel. After checking into our room, my photographer and I made our way through the maze of hallways only to find ourselves in a stereotypical banquet room in the hotel. Again, a strange place for a metal show but as soon as you walked through the doors and into the banquet hall, it all came it light and ended up being the absolute perfect place for a family-friendly show like this. I could clearly go on and on about the space or how nice it was of the hotel to let an event like this happen in there but we were there for the music so let’s get down to it!

William Campbell kicked Saturday’s festivities off (we didn’t make it to Friday night just due to scheduling conflicts and work and what not). With a clearly hungover crowd slowly rolling out of bed, William’s set was the perfect way to get the day started. Slow and calm, his music may not have been metal like the rest of the day but it packed a punch of emotion and passion that fit in perfectly.

The Pursuit of Cash had pulled double duty having played both Friday night and Saturday night (they filled a spot of a band that dropped during Friday’s portion). Watching them perform definitely made me bummed we didn’t make it on Friday. Their sound was refreshing with obvious nods to the punk and hardcore side of things. Although still early in the day, this young trio had more than enough energy to get the beers flowing back through everyone’s systems. Up next was Blodwar- a band I have seen multiple times and have never failed to leave me impressed. The first glimpse into an old school thrash sound that would pop in and out of the music throughout the day, they set was filled with perfect riffs and a driving beat that had their already quick set flying by and within no time they were being replaced by Coffinrot. Much like Blodwar, Coffinrot is one of those bands that I’ve seen multiple times and they’ve never failed to leave me impressed but something was different about their Saturday show. They sounded cleaner than I had ever heard them sound before. Every note had a place and every cymbal hit had a home but the intensity and chaos still reigned supreme throughout their set. Drew, the vocalist, has a voice that had my jaw on the ground. He performed his intense growls and screeches with a sense of ease that was nothing short of impressive. All in all, Coffinrot has always been on my radar but honestly, after yesterday’s performance, they are at the top of my list when it comes to bands I would drop almost anything for just to catch again. Mortificator hit the stage next and took us back to the thrash sound that Blodwar had laid in place. Their Saturday set was the last set in their current form with two of the members leaving the band. What a shame. Their sound was different than the rest of the line-up when it came to the vocal style which clearly was a reason they stood out to me but they also stood out because they are just a flat out solid band. One of my favorite moments of the day was when vocalist/ guitarist Gene Vogel handed his pick to one of the young kids that had been dancing all day. The look of joy on her face as she raced back to show her dad was absolutely freaking priceless.  A slight change in the set, I was surprised to see Glutton For Punishment loading onto the stage when, according to the set times, it was supposed to be Septicemic but it was a good surprise. I was instantly taken aback by the sense of brutality that this band brought to the modest stage. Sure, all of the other bands before them definitely brought the energy and flawless music but there was something just a little bit more intense when it came to Glutton’s set. With impressive guitar work, driving drum beats and vocals that could rival any big time band in the scene right now, Gultton For Punishment could have played for hours and you wouldn’t have heard a complaint from anyone in the audience. I was excited as Septicemic took the stage as they were one of the few bands on the line-up that I had never heard of before. Sharing a drummer with Glutton For Punishment, Septicemic seemed to take the brutality that Glutton had laid out and expanded on it. With more sinister vocals and just a darker feel all around, their set had the audience finally moving and pushing each other around a little bit. Krawg. Where do I even begin. Much like Glutton For Punishment, Blodwar, and Coffinrot, Krawg is one of those bands that I see time and time again and have yet to be disappointed by their set. Unrelenting and intense, Krawg’s set flew by just due to the incredible sense of energy that they brought to the stage. Although I had seen them perform most of the songs they had played in the past, they were on point and sounded clean and practiced to perfection which doesn’t always happen when it comes to local metal bands.  The weekend was plagued with cancellations but I was still a bit surprised when it was announced that the next band, Cymothoa, would be the last (according to the line-up there was one more band to follow) but I was also excited and knew that this incredible weekend festival would be ending on a high note. One of the few instrumental bands I can actually stand and enjoy, Cymothoa played through familiar songs and even treated the audience to a new track as they were allowed to play as long as they wanted what with the last minute cancellation. It was no surprise that their set was flawless because, well, it always is but I loved watching how excited the crowd was. Sure, you could blame it on the beer if you wanted but honestly, I think it was more just because Cymothoa is such a solid live band and were the perfect end to a perfect weekend. A huge shout out to everyone who had a hand in this weekend’s festivities. Seriously. What a great event for a great cause and, although the crowd was small, it was mighty and the sense of family in the room was sky high. It was one of those festivals that reminds me just how amazing the local metal scene is and how honored I am to be a part of it.

Children of Bodom, Abbath, Exmortus, and Oni To Close Out Mill City Nights on November 30th

Finnish Metal Superstars Children of Bodom are embarking on a 21-date North American tour with special guests Abbath, Exmortus, and Canada’s progressive metalheads Oni. They will be making a stop at Mill City Nights in Minneapolis on Wednesday, […]

The Blue Stones Impress With Their First Minneapolis Show

The Blue Stones played their first-ever Minneapolis concert at the Fine Line on a busy Saturday night. With temps hitting the 50’s, Spring was in the air downtown with many friends gathering at their favorite […]

Rostam sweetens up Valentine’s Day at a packed Fine Line, 2/14

Valentine’s Day – love it or hate it, it’s a day that comes once a year and forces us all to reflect on the “L” word. I have always considered myself someone more in the […]