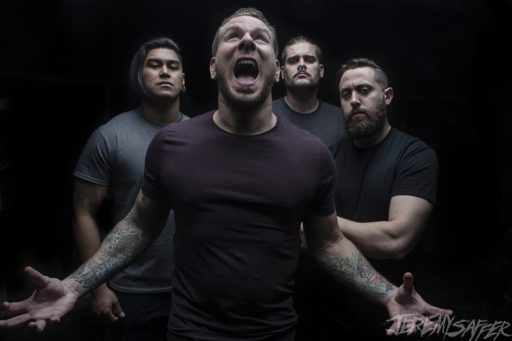 Westfield Massachusetts deathcore band Within The Ruins will play at The Cabooze this Friday 2/17.

In staunch opposition to the strictest adherents of genre-limitations, WITHIN THE RUINS triumphantly challenge the notion that metal bands must play within the rules.

A fury of prolific activity demonstrated by a catalog now five records deep and massive streams of songs like “Gods Amongst Men,” “Enigma” and “Calling Card”; a relentless touring regimen that would break many lesser bands; and an increasingly skillful self-reliance in the studio, have all forged a progressive metal sound that expertly mines the most fertile grounds of their genre while shaking off the genre’s self-imposed limitations.

Halfway Human is a super-strength strike against complacency and conformity. Vocalist Tim Goergen, bassist/clean vocalist Paolo Galang and the band’s cofounders -guitarist/producer Joe Cocchi and drummer Kevin “Drummer” McGuill – cast aside any fear of how Within The Ruins may be perceived by let their creative impulses takeover.

Within The Ruins sound raw, reenergized and angry, with a deliciously dark sarcastic bite and attitude. They’ve jettisoned the more sterile clinician approach prevalent in the genre, having already taken the perfected super produced sound past its limits before.

The aggressive one-two punch of the almost back-to-back albums Elite (2013) and Phenomena (2014), linked not only by proximity of release date but in sound and concept to a large degree as well, firmly assured the place in the upper echelons of technical metal the group first aspired to with Creature (2009), which All Music likened to Metallica’s Master of Puppets but played “twice as fast,” and Invade (2010). Elite

established Massachusetts’ finest as frontrunners in the world of extreme metal, putting the hard working group on the Billboard 200 and doubling the first week sales of its predecessor. Metal Injection called Phenomena “phenomenal” and hailed it as the group’s best album. After the three-year gap between albums two and three, the group challenged themselves to make sure their legacy in the scene was safe and secure.They’ve managed to up the ante even higher, soaring to brand new heights.

“The writing process was a bit different for Halfway Human,” says Cocchi. “We took a step back and kind of reviewed some of our older material. Typically we’d rush and blast out a group of songs and then hit the studio. At the time it felt right. And it had a more organic feel. Now because of a combination of maturity and honestly just feeling sick ofthe same old formula, we really focused on creating something different sounding.”

“We went back to a more organic style of writing and production. I personally was finally able to abandon a lot of my writing habits or ‘rules,’ if you will,” he adds,declaring TITLE “the most raw and extreme sounding material we’ve ever written.”

“We haven’t abandoned our signature sound in any way, shape or form,” Cocchi points out. “But with the last two albums under our belts, we weren’t afraid in any way to change it up, add more orchestral elements, choir, effects, different vocal textures. I hate to sound cliché and say we were reinventing ourselves, but the whole process really felt more like when we were first starting, just going for it. It felt great.”

There are rich moments of vibe and looseness here and there with more in common with the early thrash attack of the ‘80s than the processed sounds of today, right down to the moment when someone yells “guitar!” just before a solo. But make no mistake,of course. Within The Ruins are still monstrously crushing, with huge riffs galore.

“Objective Reality” boasts arguably the most traditional song structure of the band’s career thus far, juxtaposing Goergen’s passionately screamed lyrics (about the steadfast dedication to the lifestyle of road-hardened heavy metal musicians) with the no-less-passionate melodicism of Galang’s clean vocals. What began as an adventurous step-out for Within The Ruins transformed into a defining anthem for the entire album.

“Incomplete Harmony” similarly explores themes of daily life and higher creative aspirations, with a strong and moving feel to it. “Sky Splitter” is a tribute to a fallen friend, Griffin Kolinski, vocalist of the Arizona band Apparitions and former bassist for Knights Of The Abyss. The instrumental “Ataxia IV” is continues what the band began in 2010. It’s a seven-minute banger with the express purpose of topping the other three.

“Ivory Tower” may be timely, inspired by the complete circus of the 2016 presidential election cycle, but it’s (however unfortunately) just as timeless, as well. “It’s about leaders and politicians, how fake they are, and how little it seems we can do about it,”Cocchi explains. “We haven’t done much politically themed stuff, but like a lot of our songs, this one is from the viewpoint of an average middle class person, someone who is fed-up with all of it and who knows what we’re being fed isn’t what’s really happening. ”The band’s commitment to taking their music to the people has never wavered, with roughly two years straight on the road in support of their last album alone. Within The Ruins has traveled across North America and Europe and as far away as Japan. In the process, they’ve aligned with tastemaker tours, like Summer Slaughter, with Morbid Angel and The Faceless and the All-Stars Tour, with Upon A Burning Body and Dance Gavin Dance. Furthermore, they’ve traveled and performed alongside metal genre contemporaries including Suicide Silence, Whitechapel, All Shall Perish, Attila, Chelsea Grin, Miss May I, the Acacia Strain, Carnifex, and several other modern metal titans.

The touring thing for us is awesome. We love it,” says Cocchi. “It sucks to be away from family and business but recognize that being able to tour is a reward. We can still do this because our fans are still here so we feel like we owe it to them to see all of them. It keeps us motivated and excited; it keeps things fresh us. I don’t know how long we can tour, it all depends on the fans. But I don’t think we’ll ever stop making music.”

Within The Ruins maintain an emphasis on showmanship but with diversity, smartly sidestepping predictable structures and contrived breakdowns. Born and bred in the same heavy metal rich Northeast soil as New Wave Of American Heavy Metal progenitors Killswitch Engage, All That Remains, Unearth and Shadows Fall and weaned on the dark sounds of classic death metal, the technical melodicism of Scandinavia and the precision staccato crunch of Meshuggah, Within The Ruins have busted their collective ass to carve out a unique identity for themselves from those ingredients.

Within The Ruins are refreshingly authentic, feverishly committed and have proven that they will endure. Filled with power, deserving of utter respect, armed with concise compositions and technical might, Within The Ruins will not be stop

Canadian 5 piece band July Talk brought their unique and mesmerizing live show to the Triple Rock in Minneapolis Saturday Night. The band is about midway through a North American tour and was happy to […]