Last night at the historic First Avenue The Young Wild kicked the evening off in spectacular fashion.  The San Diego based group has a refreshingly clean sound. Many live shows have become over saturated with messy and distortion laden guitar riffs, but there is something to be said about the crisp nature of The Young Wild. Bryan B. William’s showed range and control with his fine tuned vocals. This wasn’t just a guitarist that was also shrieking lyrics into a mic. Too many bands feel that is adequate, but this group showed talent on all fronts. Each song had an underlying bass that could have broken the newly repaired ceiling with its thundering vibrations. The band currently has only one release “Not A One” which showcases that crisp sound that can still support a heavy bass when played live. 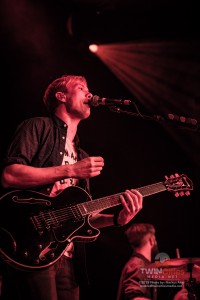 Their music seems to be built on build up. Each song boils up to a satisfying crescendo that is rare in opening bands. You instantly forget that this band is fairly new and not the main act, because the hooks are so catchy and their music is well crafted.

After the show I was able to peel the band away from the long line of fans to ask them a few questions about them and the tour. 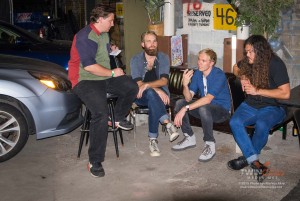 How long have you been together?

Brandon: We have officially been a band under the name of The Young Wild for about 14 months now. That’s the official indoctrination date. We all went to school together, and spent the past 6 or 7 years playing in the same musical circles. We have played music together in various shapes and forms, but it’s been about 14 months.

Have you toured before? How is the current tour coming along?

Bryan: We are a young band. We have a little bit of touring experience. We did a tour with a group called “Barcelona” out of Seattle. We did some opening dates for Switchfoot. That was a lot of fun, and also a group called “Jared And The Mill” back in May, we did about 10 shows with them. This ZZ Ward Tour is the most extensive we’ve done as a band. It’s the most consecutive dates we played by far, but we are having a lot of fun. We laid the groundwork in the earlier tours so this doesn’t feel like too much of a stretch. Even though we’re far from home we are getting new experiences and learning a lot from it.

What has been the biggest struggle and how have you worked through it?

Brandon: It’s not the shows, it’s the logistics. Getting from A to B. We’re in an old van with an old trailer. It’s broken down on us a couple times already. Our driver side window doesn’t roll down. That takes up a lot of time in our day, just getting from A to B. For the most part it has been pretty smooth sailing, but whenever a snag comes up like that while you are on the road it really puts a wrench into the plan. We have to figure out how to work around that. For this particular tour the hardest part is just getting from A to B. But we are here, we’re alive. We haven’t been too late yet. We had one gig where we showed up 20 minutes before doors opened so we had to do a quick sound check and play. We had raced from Baltimore to Boston in about 6 hours.

Bryan: That song was written about a year ago. Since it’s the only song we currently have released it is our band’s calling card. It is special to us because it marks a point where we were able to put a little bit of everything we like into one song. It’s a dynamic song. It’s a dynamic song to play and involve an audience with. It has all the flavors that we like and want to put in our songs. It’s been fun performing it every night, you know you’ve done a decent job if by the end of the song most of the audience knows the main hook and can participate in some way. That’s the goal of the songs is to let it be something that people can relate to and participate with.

Your music has some varying styles. Is that the nature of your band or is it from the band already evolving?

Brandon: I think it has to do with a lot of those things. Maybe all of those things. It has a lot to do with what we are listening to. As far as the song writing goes and development, Bryan is our primary songwriter. I think as a collaborator with Bryan, watching his process of bringing taking a song and bringing it in after the structure is built and letting the band have some direction and influence and figuring out what works. Playing live is a huge thing right now because all of the song we have been playing haven’t been released yet. They are still in sessions on my laptop we are literally still producing the songs because they are not released yet. So we are learning a lot after we play them every night. I feel like I walk away with some feeling of what works and what doesn’t. So that’s been a big influence as far as our sound and how each song is formed and developed. 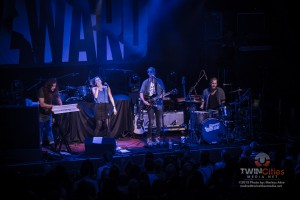 When you are in the van together what do you normally listen to?

Gareth: I think it is a varied amount of content. We have been doing this for a little while now; we’ve been in the van together. It started out as listening to music collectively as a group. Our tour manager Steve really likes the new Dre record, so we have been listening to in a lot. As we’ve gone forward and been together a while, it has turned into our own enclosed space. You put your headphones on and listen to something, whether it be a podcast, book, music, silence or the GPS telling you which way to go. Then every once and a while we will listen to a comedian or a podcast and then go back into your own world and get whatever work you are doing done. So it really is a lot of different ideas of sound and music or whatever it is that’s in your headphones.

What is the next step for The Young Wild?

Brandon: Well we’ve got to finish the record. That’s the big one in my eyes at least.

Bryan: Dinner. We’ve got to get some dinner. I’m just trying to go step by step, day by day. But this marks the middle of the tour, and we’ve got a lot of great shows to play. While on the road it would be really hard to compartmentalize and finish a record. We are making progress, even though we aren’t back home in San Diego or in a studio. The tour with ZZ Ward is going really well. Figuring out how these songs translate live and we are walking away with a lot great information about what the audience thinks and how they work. We will finish up the year with a little more touring, finish the record and get busy with media and all the other things that go along with releasing music. We are looking ahead to early next year to release it.

Can’t wait for an album? Keep up with The Young Wild on their Facebook page here.

There wasn’t an official name to the tour but somehow 3 acts led by Asian-American women were on the bill at First Avenue’s Entry Tuesday night. Not being familiar with any of them I was […]

Minnesota is getting a full dose of Taylor Swift’s 1989 World Tour. It would be very easy to sum up Taylor Swift’s opening night performance at the Xcel Energy Center (St Paul, MN) with the […]

I’ve been living in a pop world for this latest stint of shows. From local group to Whosah on Wednesday night to the always energetic New Politics on Thursdays and then The Mowgli’s on Friday, […]