Over the year, I have been fortunate to cover many great artists. Some people have asked me where it all started and who was the first band I photographed live. Back in the dark ages (the 80’s to be exact), I was an ambitious teen who had a high school Photo Teacher that inspired my love for not only photography, but also my love for rock music greatness … The Doors, The Rolling Stones, The Beatles, but mostly The Who. In 1982, that teacher pulled strings with someone, who knew someone … (you know how it works) to cover The Who at the Los Angeles Coliseum. Along with this, one student was being allowed to accompany him. And YES, I was chosen to tag along. Most of my shots did not come out (as this was the fun film days coupled with little experience), but a couple of frames managed to capture the moment. I recently located one of those shots on a negative (photo below). As I now near the great half century mark in age, there will always be the lasting memory of The Who being the very first band I got to photograph in concert. 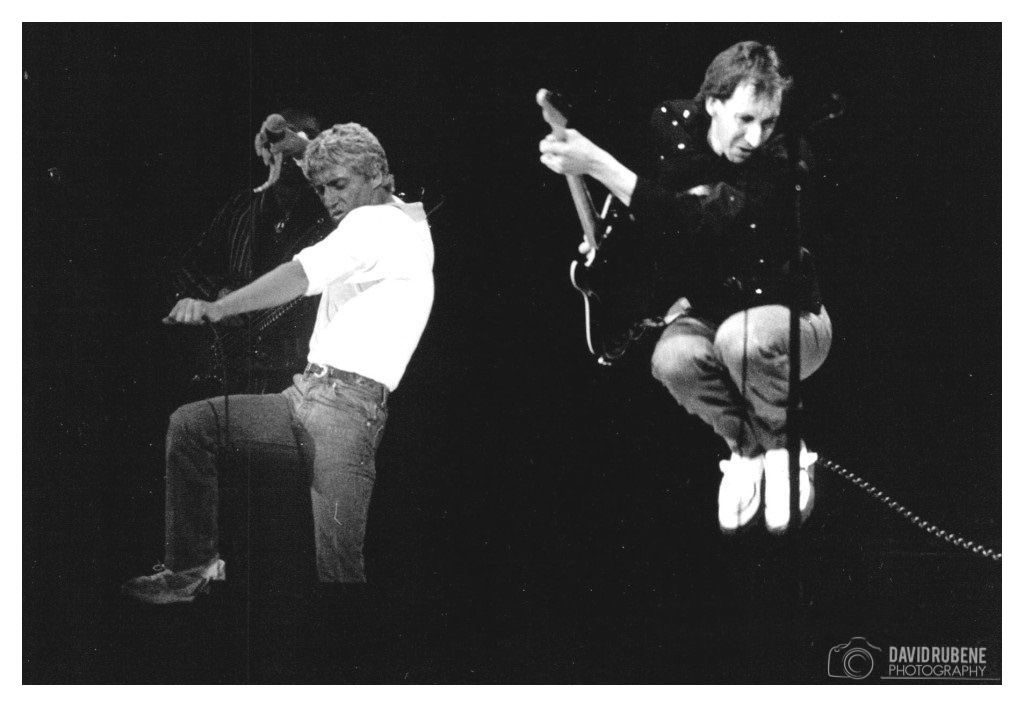 The Who, one of the greatest rock bands to ever walk the Earth, is on the road once again on The Who Hits 50! Tour, which began in November 2014 but was interrupted last fall when frontman Roger Daltrey contracted viral meningitis. Thankfully, the man who has sung “hope I die before I get old” thousands upon thousands of times bounced back and will be at Target Center on Sunday, May 1st.

Is this the last time The Who will tour? This rumor has been circulating. The 72-year-old Roger Daltrey and his 70-year-old mate Pete Townshend, affectionately known as The Two, are joined by Pete’s brother Simon (guitarist since 1996), Pino Palladino (bassist since 2006) and Ringo Starr’s son Zak Starkey (drummer since 2010) along with other backing musicians. This one, unlike the Quadrophenia Tour the last time we saw them roll through the Twin Cities, is a ‘greatest hits’ show that will likely include My Generation, I Can See for Miles, Pinball Wizard, Baba O’Riley,  and Won’t Get Fooled Again. However, fans could be surprised with occasional curveballs like So Sad About Us.

If this is The Who’s last show in Minneapolis or the last tour it’s been a hell of a ride from the very beginning.

There still some select seats left, so don’t delay. The Target Center performance will be one that you will not want to miss.

Pop-Punk Is Alive And Well- Have Mercy, Boston Manor, Can’t Swim, and A Will Away Prove It

My typical fifteen minute drive into downtown Saint Paul turned into forty-five minutes due to the first “real” snowfall of the year. When I got downtown and to the ramp I typically park in, I […]

Yung Gravy Was Sensational At The Fillmore Minneapolis

The freshly christened Fillmore Minneapolis was in full swing by the time I made my way into the building, through it, and to the photo pit last night. DJ Tiiiiiiiiiip was in full effect at […]