No, that’s not a joke, that’s seriously what happened Friday night. 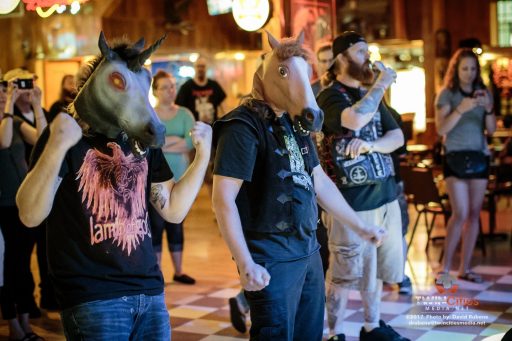 Friday night was a celebration for a local instrumental metal band that is quickly becoming one of my favorite local groups. Cymothoa is not only one of the most creative bands that I’ve heard in awhile, but they are also three of the nicest guys you will ever meet. That’s why it was so heart warming to see how many people had taken time out of their Friday night to come and see them celebrate the release of their new album “Destination Exile“.

I had the privileged of sitting down with these three guys last weekend to do a “Track By Track” discussion (Take a listen here!). Being able to pick their brain about their influences and the process they use to make their music really added a whole new dynamic when seeing them live. I could hear some of the elements we had talked about in the studio last weekend and it made me appreciate everything they were doing more.

The beauty of Cymothoa’s music is that they aren’t trying to be anything other than what they are. They don’t take themselves too seriously but they also don’t take the whole band thing as a joke. Their music really stands out from other bands because they don’t care how heavy it is or how fast it is. They just like playing high quality music that they like and they  find interesting. The fact that other people could get behind what they were doing was just a bonus.

Although Friday night’s show was the album release party for Cymothoa, the night was about so much more. MC’d by the one and only Greg Chilton of Ritual Madness Podcast, last night was a great showing of the power of the local metal scene. With five bands performing throughout the night, it was a great sampling of many different styles of metal that the Twin Cities have to offer.

Opening up the night was Zenith Waves, another local instrumental group. Much like Cymothoa, these guys clearly had a passion for what they were doing. Being the first band of a long night of a music is never an easy thing. Most people show up late or are too busy saying their hello’s to friends they haven’t seen in a little bit to really notice that there’s a band on stage but Zenith Waves commanded your attention with ease. With a sense of power and fury that is rare for an instrumental band, these guys powered through their quick opening set and left me wanting to hear and see more.

Following Zenith Waves was Deephaven. These guys had a very Deftones vibe to them and a sense of moodiness that had me intrigued. At times the music came off as extremely atmospheric but within seconds, the mood would change due to the addition of very heavy instrumentation making it feel almost sludgy at times. Much like the weather here in Minnesota, if you didn’t like a certain portion of a song, you just had to stand there for a couple of seconds and it would completely change.

Wrapping up the night was Cwn Annwn and Hate Beast. Unfortunately, due to my friends’ work schedules, my exhaustion from my current show bender, and the fact that the show didn’t even start until nearly 9PM, we made the call to head out early and we missed the two closing acts. My apologies to both of those bands but I will catch them both soon!

All of the music last night was amazing but what was more amazing was the crowd. As I mentioned, there was a good sized crowd last night. It wasn’t sold out or anywhere near but, when in the Twin Cities with no less than a dozen concerts going on any given night, just getting a handful of people in for a local metal show is impressive. Not only did a good amount of people show up, they all showed up with a smile on their face. The crowd was clearly into the music and at the show for a good time. There seemed to be a small, yet constant, mosh pit going in front of the stage that featured a guy wearing a horse head and his buddy in a unicorn head. Mix horseman and unicornboy with the $2 Jack & Cokes and amazing local metal music and you get exactly how a Friday night should be.

I’m not much of a hugger but I was feeling generous (meaning a wee bit drunk) last night and found myself hugging damn near everyone. The inviting atmosphere and seeing so many familiar faces added a sense of community to the night that I don’t get at the bigger shows I cover.

The feeling of being at a local metal show will never get old for me.

The frigid temperatures couldn’t keep the crowds away from First Avenue on Saturday night. With a show so big it took both the Entry and the Mainroom to contain, Horseshoes and Hand Grenades and the […]

Grace Potter To Headline The Palace 2/8

Grace Potter is headed back to the Twin Cities to tour her recent record Daylight (2019). The album is her recent return back to the music scene since her record Midnight from 2015. Daylight, which […]

You know the old saying “Don’t judge a book by it’s cover”, well as I learned last night: “Don’t judge an artist by their Wikipedia entry”. In my defense I’m probably not in Dominic Fike’s […]