Indie Rock Band “The Kills” consists of American singer Alison Mosshart and British guitarist Jamie Hince. It has been a few years since their last album (2011) and their fans are eager for the new album that is in the works. In the last few months the duo has been playing some new songs at shows. Needless to say First Avenue was sold out shortly after tickets went on sale. 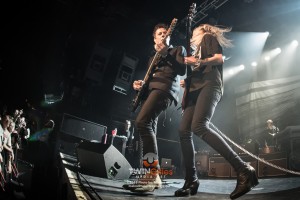 This was my first time to see “The Bonnie and Clyde of Rock’n Roll” live and I was not ready. I was familiar with some of their music had read some reviews and bios. 15 seconds into “U.R.A. Fever” Mosshart lets loose and unleashes her energy on stage. Enough hair flipping to make a metal band go “Whoa Dude!”, contortions around the mike, hand gestures and oh that voice! Angry, raw, almost animalistic. Hince is no slouch in the stage presence department either. His movements are  cool and controlled but play well off his partner in crime. Backed up by 2 drummers the music is fast and deliberately rough around the edges. To me this is what a rock band should sound like: Edgy, raw and dangerous. 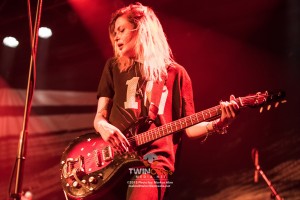 The Kills put First Avenue’s new lights to great use. It was bright, at times deliberately harsh and matched the bands energy. Mosshart and Hince played a couple of new tracks, and if those are an indication of things to come on the new album, we are in for interesting times. The band proclaimed their love for First Ave (calling it their favorite). The club and the audience loved them right back. I have been to well over 100 shows in 2015 and last night is in my Top 5 so far.

On the heels of her popular run on this season’s Dancing With the Stars, soulful songstress Patti LaBelle will take the Mystic Showroom stage on Saturday, June 6, at 8 p.m. Belting out classic rhythm […]

Lullwater (named after the street in Athens, Georgia where they used to rehearse) appeared at Route 47 in Fridley Sunday night and put on a hell of a show. They were a last minute booking […]