After the end of a long work week, and spending some time with friends on Friday night I couldn’t help but think that I was going to be seeing Steve Aoki in less than 24 hours. I had always heard how great of a show he puts on, and was excited to finally experience it for myself. My Saturday afternoon leading up to the show was spent at the Minnesota Beer Dabbler which had me a little nervous; not because of the alcohol intake, but because of the once again crazy winter storm that was hitting us with only a day’s break from our last. Being cordoned into the Minnesota State Fairgrounds I didn’t have much of an opportunity to see the impact the weather was actually making until much later in the day. An $80 Uber ride due to “surging”, and hugs to close friends we arrived at the show fifteen minutes early.

Immediately seeing the line that was wrapping around the building slowly growing longer and longer I was thinking we were going to have to spend much more time outside than intended. Soon though, I didn’t have a care in the world about how long I had to spend outside. As we were walking by the line to reach the end I begin to hear fellow fans screaming, and I find myself wondering what could possibly be going on. Bringing my focus up from my feet I see Aoki himself walking along the line giving high fives right toward me, and as I approach him myself I raise my hand getting my own high five. I haven’t had many experiences having encounters with those artistically talented in one way or another so this helped make it a night to remember. I would say that the most pivotal detail of this moment was how relaxed, easy going, and cool this made Aoki seem. Not many will come running through the streets before their show in the middle of a snow storm; let alone a Minneapolis snow storm. I would like to say thanks to Aoki himself for being genuine, and making my first show that much more kick ass. 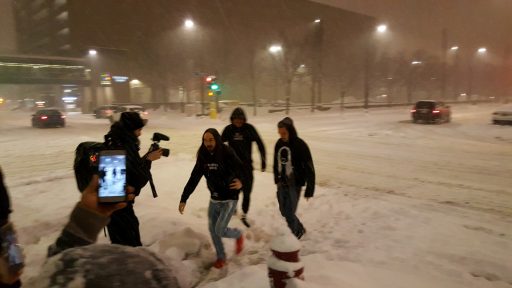 With The Armory being a relatively new venue to the Minneapolis area I hadn’t been inside before nor knew what to expect with security and whatnot. Upon entering I was happy to see that they did have a substantial amount of security in place, but it was relatively quick and painless. There were quite a few artists that accompanied Aoki on his 2018  Kolony U.S. Tour including Desiigner, Quintino, Bad Royale, and Max Styler. Once inside we grabbed a few drinks, and continued to go check out the music that had begun to come across the speakers. Styler kicked off the night at 8 p.m. with about an hour long set of tunes that definitely helped set the mood. Bad Royale and Quintino followed Styler providing the crowd with an assortment of promised musical talent.

Around 11:30 p.m. Desiigner came onto the stage for about a half hour long set playing hits like “Panda” that was released in 2016. This set of artists was the perfect way to set up the night for Aoki himself as each of them house incredible talent, and complement each other well.

Aoki came onto the stage around 12:10 a.m. with no hesitations of stopping the party until 2 a.m. which clearly meant the night had just begun. Providing fans with a mix of both new and old songs helped promise that everyone would leave fulfilled more than likely leaving Aoki on their favorite concert list. Just a few of the songs Aoki chose to share with us were, “MIC Drop”, “Just Hold On”, “Lit”, and “All Night”. With his set lasting close to two hours it was difficult to catch all of the songs, but I was very impressed. 2 a.m. nearing individuals began slowly filing out, and we decided to follow suit to ensure we got home before the end of night rush. I can assure you, however, that as we were walking away from our spots in the crowd Aoki began his closing staple cake-throwing making the crowd go wild yet again. Aoki definitely knows how to put on a great show making sure everyone in attendance enjoys themselves. After a long yet enjoyable day I was looking forward to heading home to get some food, water, and sleep.

My lesson from Saturday: Only in Minnesota will people think it’s normal to go to an outdoor beer dabbler, and see a Florida native running through our streets both in the midst of a snow storm. Because sometimes you have to live a little, right? Right. Don’t let that moment pass you by.

Overall Experience: Each of these artists complimented each other very well, and helped make it an enjoyable experience for everyone in attendance. I know I had a blast, and I can’t say I would have changed much about the night.

Venue: Seeing The Armory for the first time was incredible, and man is that place massive. This venue is accommodating for concerts that have a high expectancy rate, the sound is great (I think), and they have their logistics figured out for the most part.

Attendance: I wasn’t expecting low attendance at this show considering who was going to be performing, but I was nervous that the snow would have an impact. Luckily, no one was letting a little bit of snow throw a wrench in their evening and the crowd was there to support these artists in full force.

Denzel Curry is a new generation rapper from South Florida. His deadly lyrics, powerful performances and storytelling power set him apart from many present day rappers. Denzel has been busy this year releasing his third […]

It was nearly two hours before show time and there was already a line in front of The Varsity Theater for Tuesday night’s show. My friend and I cracked a couple of jokes as we […]

The Devil Makes Three turn First Avenue into their Back Yard

14 years into their life as a band, Santa Cruz, CA bluegrass band The Devil Makes Three decided to change things up a bit with their new album “Redemption & Ruin”. The record covers songs […]