On what (hopefully) will be the last snowy night of our MN winter I found myself a the troubadour wine bar to check out Meteor Base’s showcase. Meteor Base is a production and development company that puts on Open Mike Nights and Showcases several times a month. This was their first showcase at the Troubadour. Founder Jacob Jones hopes to grow the events in the Twin Cities to more locations and Meteor Base is working on producing and recording albums for several local artists. 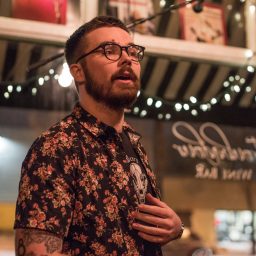 Maren Knep started the night. She started her set with the intro “I’m going to play a little music, I hope it’s ok with you, because it’s going to happen to you anyway” Her songs are all original material, at one point she mention that she was a big fan of writing herself love songs. She has a breathless quality to her voice that draws you in.

Her songs are inspired by her life and her lyrics make you pay attention. My favorite? “The next time you feel ashamed, look in the mirror and see what you reclaimed”

Matthew Burress has clearly done this a few times. His first song “Escape” made that quite clear to me The guitar chords accompanying his voice were quite complex at times, and his delivery polished. His voice reminded me a bit of George Ezra.

He introduced one song with, “I’m not one to really explain the meaning behind my lyrics, but this song is definitely about technology addictions.” Burress also played a newly written song, but I forgot to ask what the title was 🙁

John Lampson was a change of pace. This was his first performance in some time, but however long he was away, he did not seem to be rusty in front of an audience. He chatted with the audience and his songs were a lot more on the indie rock side of an acoustic showcase.

His lyrics were quirky at times, his second song “XYZ” was the first I ever heard about examining one’s zipper. “Cats and Pizza are so tasty” – his most downloaded songs. His last song was inspired by Food Trucks and squirrels.

Garrett Vazquez was the final artist of the day.He recently released a new album “Paint It White”. His voice is quite mediloc pitched a bit higher than his predecessors. His sound reminded me of Jeremy Messersmith.

He closed his set with a Beatles Cover “here comes the sun” inviting everyone to join. The gasp of joy from the audience when they recognized the song, was interrupted by a wrong cord and a “shit” slipping from his lips, making everyone chuckly

All said, I enjoyed myself. All 4 artists of the evening were interesting, I liked the vibe of Troubadour – the wood and candle lights suited the music quite well. So if you find yourself in need of some good original music and a good glass of wine, keep this event in mind. Meteor Base will return to the Troubadour the first Monday of each month.

PREVIEW: Doll Skin, Revilwen, and WarRooster at The What’s Up Lounge on March 31st, 2016

If you’re looking for good shows in the Mankato, MN area and you aren’t sure where to go, you haven’t checked out The What’s Up Lounge!  They have been bringing in some great acts, both […]

PREVIEW: Colin Campbell & The C-Notes Are Coming to First Ave on December 28th

Prepare for a full Holiday recovery when Colin Campbell & The C-Notes hit the stage at First Ave 7th Street Entry on December 28th!  The C-Notes are a band of brothers who embody the bright future […]