There is a lot of things happening for Pop Evil in 2018, so it should be a treat to see them live during their ‘Music Over Words Tour’.  Minneapolis Music Hall will be their 4th stop on this tour on February 17th, just enough to have worked any bugs out and deliver a pretty cool show!  This tour marks Pop Evil’s official kickoff for their recently announced self-titled LP, due out on February 16th, just one day before this show!  The massive US tour kicks off on February 14th in Sault Ste. Marie, MI at the Kewadin Casino.  The band will hit both sides of the U.S. coast before wrapping things up at The Fillmore in Detroit on April 6th.

Palaye Royale and Black Map will serve as support for all dates. 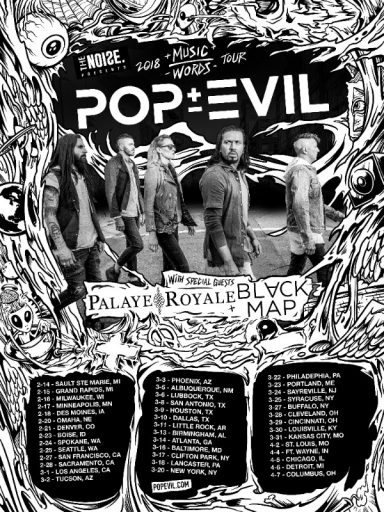