When the World’s Loudest Month announced their 2015 Rock festivals, they introduced a new Festival to the month. The upper Midwest have always been a stronghold for rock bands and until this year a festival of this magnitude has never been presented. It did not take long for fans to snatch up tickets at a record pace and sold out Northern Invasion over a month in advance. Featuring two stages and 16 bands, this setup allowed for fans to not choose one band over another due to several stages and allowed for both stages to have a large gathering of fans. Somerset Amphitheater has been hosting festivals for year’s including Knotfest in 2012 and can handle crowds of 40,000 a day as well as camping and RV sites. With a solid lineup featuring Anthrax, Volbeat, Halestorm, Five Finger Death Punch and headlined by Slipknot who have not returned since the 1st Knotfest.

You could not ask for more perfect weather, with temps in the high 60’s, the crowd poured in after 11am. Cold Kingdom and Crobot got the festival started on the stage. Crobot have been touring with Volbeat and Anthrax and serve up a dirty bluesy rock that is best seen live with their powerful performance. Throughout the day the 2nd stage was bringing it with performances by Starset, We Are Harlot, Young Guns, The Pretty Reckless and a band that brings the noise, Anthrax. After 30 years there is no sign of slowing down for Anthrax as well as sounded better than ever. Halestorm closed down the 2nd stage and they had the area full, as bodies packed on top of the hill where the stage was located. Halestorm have just released their 3rd album Into the Wild Life and their set was filled with arena anthem songs as fans sang along throughout the whole set. 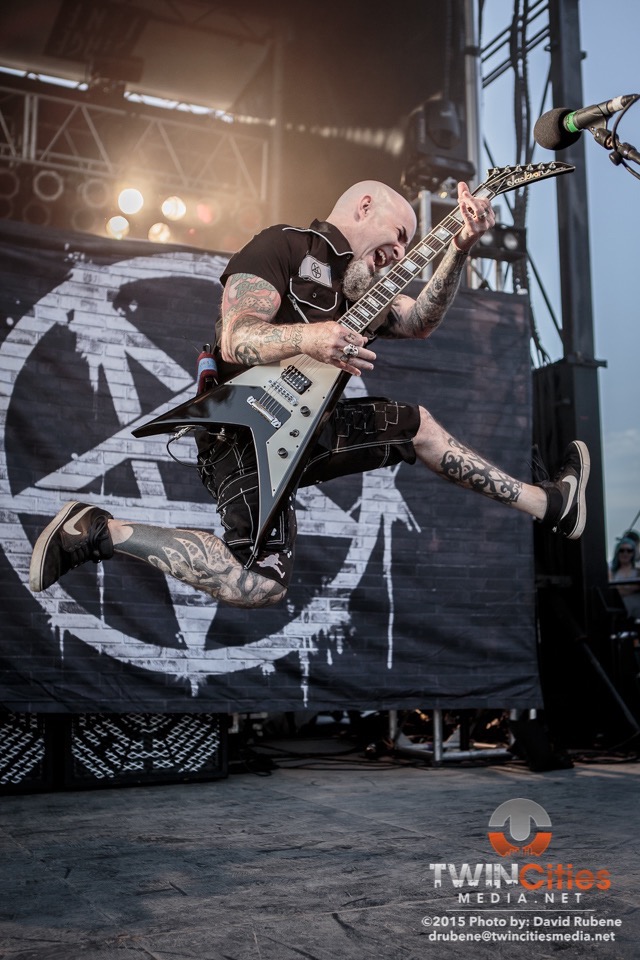 After a little delay Thousand Foot Krutch opened the main stage; they seemed to struggle to get the crowd into it as their set seem to lack the energy. Motionless in White more than made up for it.  Was good to see guitarist Ricky “Horror” Olson back on stage after missing Welcome to Rockville. Ever since the release of Reincarnate in 2014 MIW have been touring everywhere and bringing an energy filled set, at this pace I can see MIW playing later in the day for festivals. Another band that has been climbing up the festival stages- In This Moment. In 2012 they released the album Blood; a different direction, sound and found success. ITM have taken stage production to another level. Combining arts with music, In This Moment is a must see live show for any rock fan. 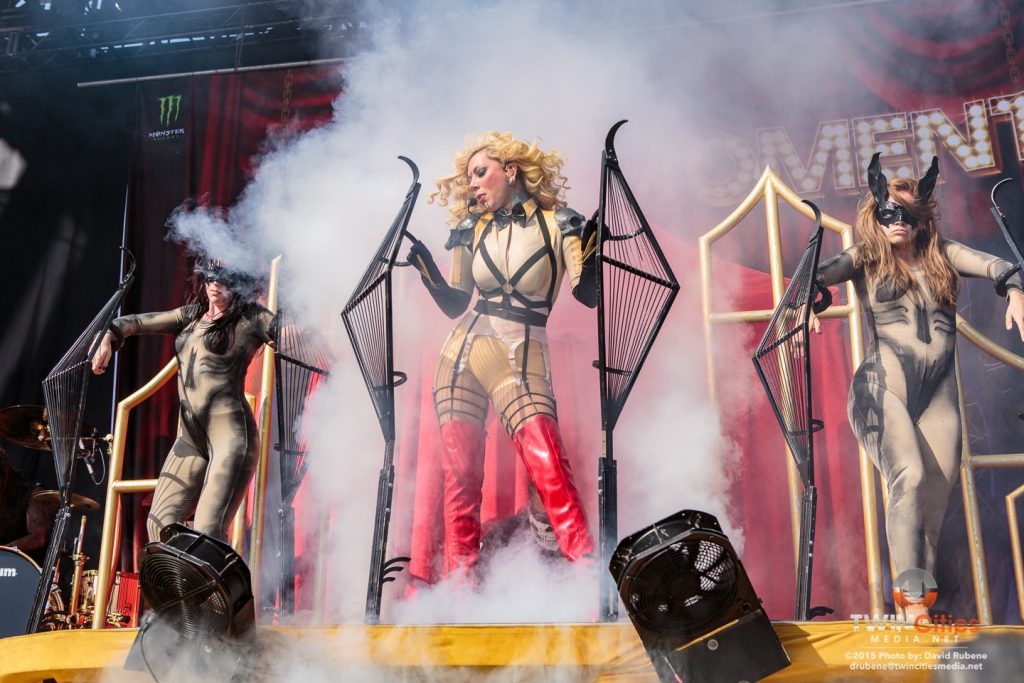 Three Days Grace know how to rock a stage, with a set list filled with #1 hits and 2nd tour run with vocalist Matt Walst. Their just released album Humanreached #1 on Top Hard Rock Albums proved to be festival favorites. The night just kept getting better and better, with three bands who alone could headline any tour/festival. Volbeat, who have been on tour with Anthrax and Crobot, knew how to bring the noise as singer Michael Poulsen kept telling the crowd. They packed 11 songs in their 45 min set that ended with A Warrior’s Call and The Mirror and the Ripper. Five Finger Death Punch have just announced the title of their 6th album Got Your Six to be released late summer. After the much to do about nothing break up rumors over their ill-fated show a few weeks ago, tonight showed nothing but a superb sound and tight set. 5FDP are all about giving to their fans the best show, singer Ivan Moody prowls the stage like a locked tiger looking to strike. Tonight’s show put all rumors to rest and fans can check them out on tour this summer with Papa Roach and In This Moment. 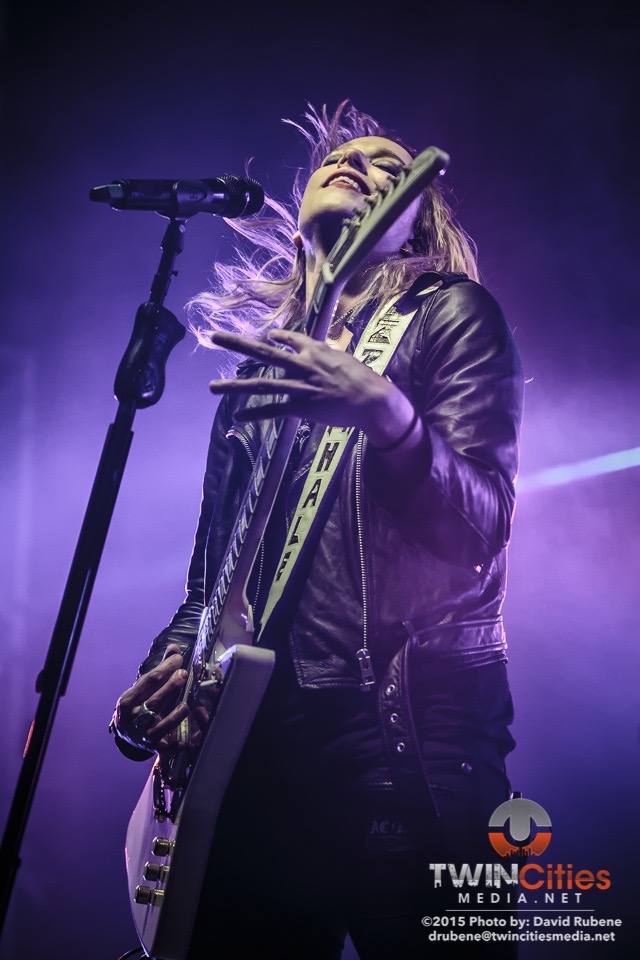 Northern Invasion ended the night with Slipknot, who 3 years ago took to the stage in Somerset, WI. While their stage show is still a visual and sonic feast as was then, they have added new touring band members. Slipknot definitely know how to control a crowd and move them as a single unit.  The success of Northern Invasion proved fans in the north are hungry for a festival like this, Danny Wimmer from Danny Wimmer Presents, mentioned to the crowd that they will be back next year. I will not be surprised to see this this festival moved to 2 day as the north was invaded with a slamming success.

Photos by David Rubene   The line to get into Sunday night’s show had to have been about a mile long and, no, I’m not exaggerating. It seemed like everyone and their brother was at […]

When the World’s Loudest Month announced their 2016 Rock festivals, it was great news to see that Northern Invasion would not only be back, but also bigger than last years inaugural season. The upper Midwest […]

Photos by Jeremy Larsen and Matt Kennedy Vans Warped Tour, one of the longest running festivals in the music scene, made a stop at Canterbury Park in Shakopee yesterday. Warped Tour is widely known for […]