As winter begins to wind down, that means it’s time to get ready for the official kickoff to summer- the 12th annual Soundset Festival. Today, Rhymesayers Entertainment and Rose Presents unveil the lineup for Soundset 2019. On Sunday May 26, 2019, the preeminent Midwest music and lifestyle experience will take over the Minnesota State Fairgrounds on the Midway.

Special announcement price tickets are available today, Feb 27, from 9:00am – midnight (while supplies last), at this link: https://soundsetfestival.com.
General on-sale tickets and payment plans available beginning this Friday, March 1 at 9:00am CST at the same link.

It all goes down on May 26 at the Minnesota State Fairgrounds on the Midway. Gates open at 11:00am. Rain or shine. 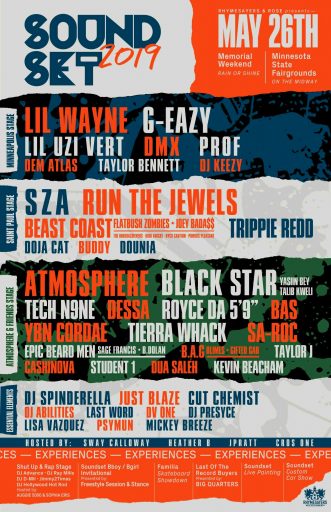 The Last of the Record Buyers Production Showcase will feature performances from Lisa Vazquez, Psymun, and Mickey Breeze, with more to be added.

Commanding the headlining position on the Minneapolis Stage, prolific rapper Lil Wayne is coming to Minneapolis red-hot following the release of Tha Carter V, which went platinum and debuted with the second highest streaming week ever for an album. G-Eazy promises a stunning performance as one of the top names in the rap game, and the mastermind behind 6x-platinum XO Tour Llif3, Lil Uzi Vert is poised to deliver an unforgettable set.

Legendary NY rap icon DMX will be moving the Soundset crowd like only he can. Known for show-stopping live sets, Minneapolis native Prof returns home after touring in support of his album, Pookie Baby. Rising Rhymesayers star deM atlaS adds his energetic performance to the lineup after the release of his debut album, Bad Actress.

R&B singer/songwriter and “All the Stars” (from the Black Panther soundtrack) collaborator, SZA, graces the headlining position on the St. Paul Stage. Super-duo Run The Jewels look to maintain their reputation as major-festival mainstays. Supporting his two 2018 releases, A Love Letter to You 3 and Life’s a Trip, Trippie Redd takes over with his versatile voice.

Atmosphere is primed to deliver an unforgettable set as they headline the Atmosphere & Friends Stage, following their release of Mi Vida Local. Legendary duo Black Star (Yasiin Bey and Talib Kweli) bring their articulate brand of Brooklyn Hip-Hop to the stage, while Strange Music co-founder Tech N9ne gets ready to ignite the mosh pits. Singer, rapper, and writer Dessa brings her genre-defying sound to life after the release of her critically acclaimed Chime. Detroit native Royce Da 5’9” adds his decades of skill to the lineup. Sa-Roc, the Rhymesayers “Goddess Gang” MC, delivers her razor-sharp wit and authenticity. The lyrical force field and viral sensation of the YBN crew, YBN Cordae, will also join the Atmosphere & Friends Stage, along with J. Cole protégé, Dreamville’s insightful and complex Bas.

Reprising his role as main stage master of ceremonies for the seventh time, radio and television personality Sway Calloway of SiriusXM Shade 45 returns to the fest. Heather B of SiriusXM, JPRATT and CROS One also return to host the other stages.