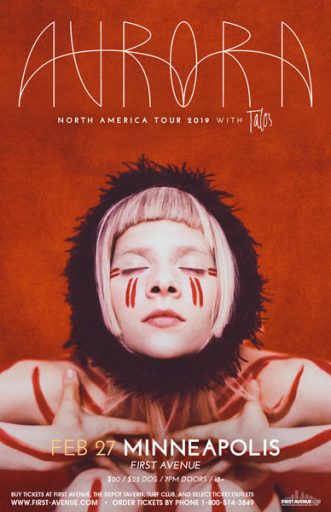 Though only 22 years old, Norwegian-born singer/songwriter AURORA has a lifetime of passion and emotion in her voice, and a well-honed knack for songwriting that has been developing from a very early age. In fact, one of her hit songs, ‘Runaway’, was written when she was 12 years old!

She gained notoriety for said song, and was featured on an NPR ‘Tiny Desk Concert’ in 2015, and since then has gained huge international fame (including her cover of David Bowie’s ‘Life on Mars’ for the hit TV show ‘Girls’)! September of 2018 found her releasing the first half of her second full-length album as an EP, entitled ‘Infections of a Different Kind (Step 1)’, with ‘Step 2’ said to be coming in the next year or two. Following the release of ‘Step 1’, AURORA embarked on a UK tour, and tomorrow will be kicking off the North American leg of her tour in Portland, Oregon. She is playing the First Avenue Mainroom on February 27th and tickets are still available HERE!