Clear your schedule for the night of Thursday, November 30th- Iron Chic and Off With Their Heads are playing at The 7th Street Entry! Now, I don’t have many bands left on my bucketlist but Iron Chic is one of them and to say I’m excited would be an understatement.

While the more obvious side of punk rock tends to be its discontent, New York’s Iron Chic use their melodic punk to evoke the genre’s sense of community and oneness unlike any other. Formed in 2008, the band cultivated a driving and infectious sound packed with so many singalong choruses and who-oh-ohs that it’s hard not to want to dive in and be a part of the action. Pair a sound like that with songs whose lyrics tackle the disappointment, angst, and uncertainty of life, and you have a virtual maelstrom of emotive and engaging punk reminiscent of bands like the Bouncing Souls.

Local group Off With Their Heads will also be playing and, you guessed it, is also a favorite of mine. Off With Their Heads have begun to carve out their own foundation in punk rock history with their very own take on rowdy, self-deprecating, beer-drinking, working class punk rock. When it comes to touring virtually year round, it isn’t a choice as much as it’s a lifestyle for Off With Their Heads. With four full-length albums at this point, there is no slowing down for this band and being able to see them perform a hometown show is always a thrill.

Opening the show will be Canadian group Mobina Galore. Mobina Galore, based out of Winnipeg, MB, Canada, are a vocally aggressive power chord punk rock duo formed in 2011 by Jenna (guitar/vocals) and Marcia (drums/vocals). They are signed to New Damage Records (North America) and Gunner Records (Europe/UK). Their latest album, Feeling Disconnected, was released on Feb 24, 2017 following an extensive tour in Canada, the States, Europe and the UK including dates at Groezrock, Punk Rock Bowling and FEST. They were nominated as Rock Artist of the Year at the Western Canadian Music Awards in 2017. 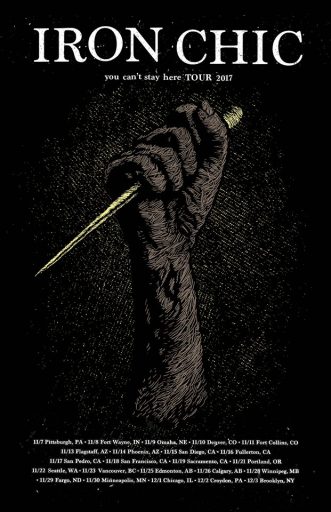 Also performing is Chicago based Canadian Rifle who plays melodic punk music and have been compared to bands such as Leatherface, Jawbreaker, Husker Du, Hickey, and Wipers. However, they infuse their own unique Midwestern sound into this realm of music. The lyrical content is bleak and abstract, but relatable – dealing with social interaction, removing yourself from reality, struggling with truths and regret, and pushing forward while running on fumes.