The five piece, who met while at university in Bristol, are proving to be a band who are relentlessly on the rise. A growing body of songs has been earning them huge amounts of praise amongst fans and critics alike. Their anthemic hit “Oceans” has hit 4 million plays on their Soundcloud alone and received major support from BBC Radio 1. Coasts are known for their critically acclaimed live shows – after their performance at last year’s Lollapalooza, they were named “Band Most Ready For Its Inevitable Rolling Stone Cover”. The band released their debut self titled full album a few months ago.

This should be a fun evening with 3 entertaining bands. 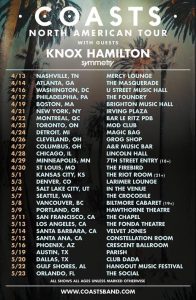