With the Fall season upon us, I always look forward to the start-up of the football season. From youth football to NCAA to the NFL, the amount of football competition is always in the air. Tuesday night, I ventured out to US Bank Stadium to catch the Centennial vs Big Lake and the Centennial vs Roseville0 games that were part of the Youth Football 2019 sponsored event. 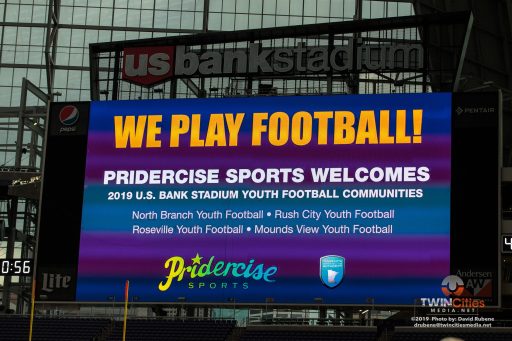 The event was planned and organized by Pridercise Sports (https://www.pridesportsleagues.com/) who has a full line of football games and events planned at US Bank Stadium over the next few months. At the helm of the Pridercise Sports is JD Pride.  As an athlete, trainer and amateur sports organizer and advocate, J. D. Pride (J.D.) has served the Minnesota community in recreational sports and fitness activities from 1978 until the present.

This history of service in the metropolitan community and J.D.’s sporting entrepreneurship began when he attended the University of Minnesota on a football scholarship from 1973 – 76. Pride played and lettered in football and basketball at the U of M. He was drafted by the Miami Dolphins in the 1976 NFL draft.

After a short NFL career, J.D. returned to Minneapolis and started a fitness venture called Pride Sports and Fitness, Inc. “Pridercise”. He launched and conducted his unique fitness exercise activities at local health clubs. Later that year, Pride began his own fitness company — Pride Sports and Fitness in September 1978 — refining the program and conducting exercise routines around the local chain of lakes.

Pride presently continues to offer recreational services to metro youth football associations, and currently has the most diverse list of youth football, soccer and lacrosse associations as any other organization in the 7 county metro area. Pride has also began to promote, sponsor and offer adult men and co-ed touch/flag football leagues and tournaments. These leagues have grown to over 96 corporate and bar sponsored teams playing each week. J.D., along with his son J.D. Pride Jr. and staff, show a serious dedication to serving the communities throughout the Upper Midwest.

I met Jake Kemble a couple of years ago when a buddy took me to a small show in my hometown of Des Moines. I didn’t know anything about him and, although I loved his […]

Jake Bugg creates something special at the Fine Line

On cool Fall Wednesday evening, the synthesis of southern rock, soul, blues, rock, punk, and country from Memphis, Lucero, performed to a capacity crowd at First Avenue. Lucero was started in 1998 by founder and […]