Mason’s Metalfest #2 brought together ten bands to one stage at Lee’s Liquor Lounge on Saturday. Ten amazing local metal bands that are truly too big for this local scene. I could talk about each of them in depth and point out the highlights and the flaws in each set. A post like that wouldn’t do justice for yesterday though because yesterday was not about the music. It was about this insane group of people coming together to support one of our own and that was more beautiful and more energizing than any band that stepped foot on the stage yesterday at Lee’s Liquor Lounge.

Where do I even begin when it comes to trying to tell you about Mason McDeid. At only 23 years old, this kid has been through hell and back. Confined to a wheelchair due to cerebral palsy, Mason has fought illness after illness and surgery after surgery. Honestly, if I was in his spot I think I would have just been done. There would be nothing to bring a sparkle to my eye if I had to go through something like what Mason has gone through but Mason still has that sparkle and it shines bright when he watches live metal music. His dad, Richard, has made it his goal to take Mason to as many metal shows as possible and it has become the local scene’s goal to help Mason and his dad reach that goal. Yesterday was Mason Metalfest #2 and although the crowd wasn’t sold out, it was packed and everyone there was there for the exact right reason- for Mason. 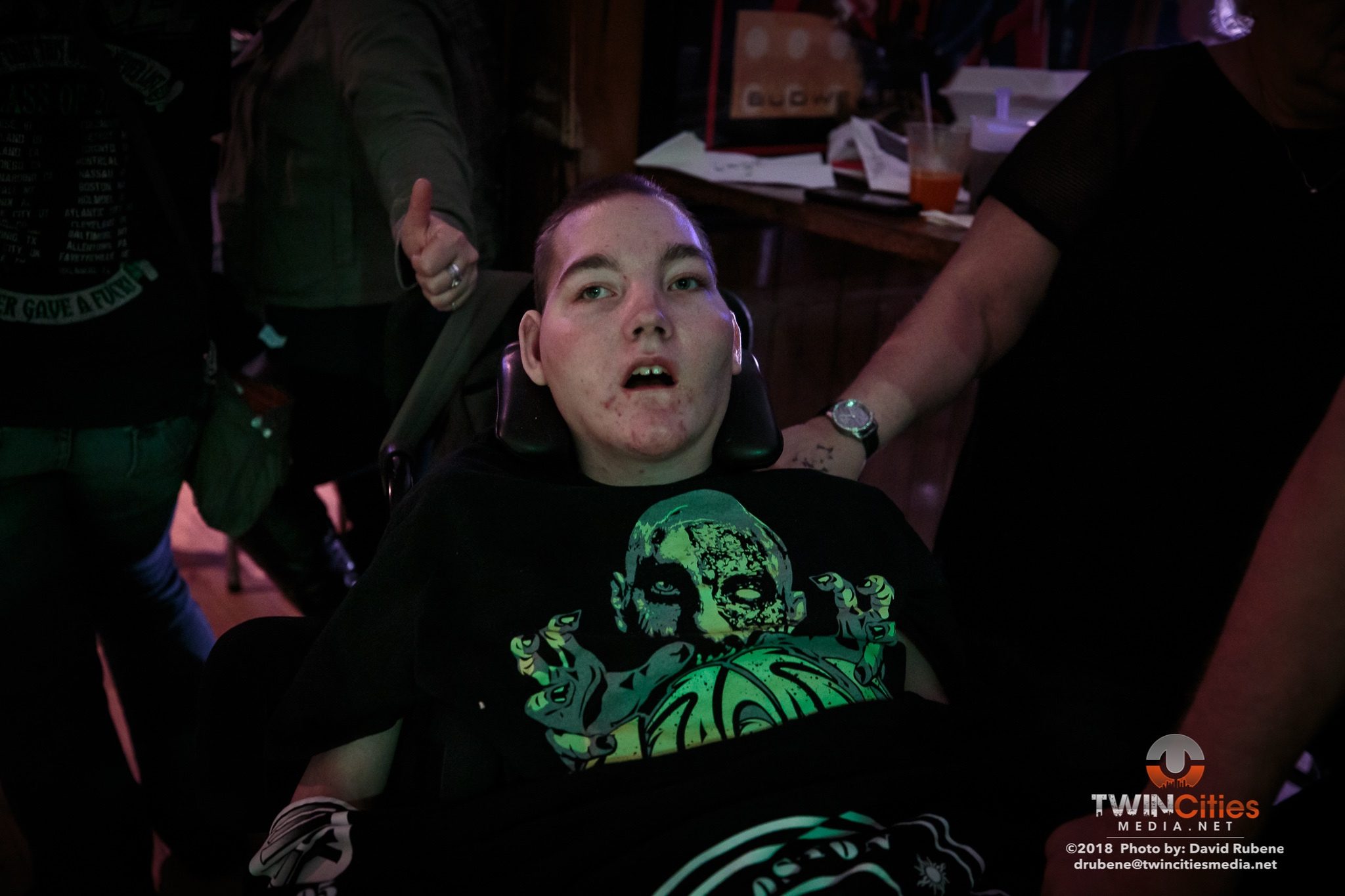 The man of the hour appeared as the first band, Distal Descent, kicked into their set. There was a sense of joy that entered the room at the same time Mason did. Everyone turned their heads, gave a giant smile and then went back to moshing their hearts out. For just a local show, the energy in the room was on point throughout the long day of music. Band after band, pit after pit, people went about the show like any other local show but every time a band would mention Mason or dedicate a song or set to Mason, there would be a roar of applause that made it sound like we were in an arena, not just Lee’s Liquor Lounge.

As mentioned, the day and the festivities were all about Mason and clearly rocking hard for him for a solid 8+ hours. With band merch, ‘Best Seat In The House’ merch, and even multiple food trucks serving up Italian and Mediterranean dishes, the crowd in attendance settled in for the music to hit the stage. Here are some of the highlights of the day:

Distal Descent
I believe any band having to kick off a long day of solid Metal has some added pressure to clearly set the pace. Distal Descent wasted no time in taking full control of the stage and nailing their set. Those people outside, quickly came inside to catch the these guys. What a great start to the day and definitely captured Mason’s attention along with many others.

Karma Sutra
Karma Sutra wasted no time keeping the energy going. I first saw Karma Sutra a couple years back as they opened for Raven Black. The bands stage presence rather interesting and takes on a Steam Punk-like theme. Their energy an drive are non-stop and easily generates a that moshing energy. Their set seemed to go by very quick leaving cheers for more. Mortic
Mortic took the stage at that point in the early evening when the next level of energy was needed. Mortic full succeeded on bumping the intensity up a few notches. Hard and solid to the core and engaging the crowd at every moment. And in the tradition of any good Metalfest, Mortic call for the ‘Wall of Death’ as a lead in to one of their last songs of the set. no injuries, not fatalities, just great Metal-community fun. Forever In Grey
One of the few bands to perform that I had never heard of or seen before, this group brought something different to the day which was beyond refreshing. Their sound almost had this more thrashy and hardcore edge to it which definitely made them stand out from the rest. I loved their energy and can’t wait to see what else they have.  Echoes of the Fallen
I don’t even know where to begin with these guys. I saw them for the first time just a couple of weeks ago and fell in love. Their clean sound and intense stage show on Saturday was the nail in the coffin for this band. It may have been just a couple of weeks since I had seen them last but I already felt like the band had progressed in a very short span of time. Cymothoa
One of the few instrumental only metal bands in the local scene, this trio sounded better than I had ever heard them sound before. Completely tight and together, their set short didn’t last long enough for my liking. From the clean patterns of notes to bassist Justin’s smart ass mouth, their set was probably one of my favorite of the entire day. Semtex
Semtex jumped into their set and quickly introduced everyone to the meaning of old school thrash. Loud, fast and to the point, there was no looking back. Even though we were more than half way through the fest, the music clearly called to the those dedicated in occupying the front of the stage and moshing about. Semtex sound was a bit infectious in a very good way. Krawg
This band never seizes to amaze me. Brandon, the vocalist, always brings this undeniable sense of energy to the stage and yesterday was no different. I had two friends show up to grab a couple of drinks with me before Krawg took the stage and I had to stop mid-conversation due to that energy. I was captivated the way a touring act would captivate me. The raw energy, power, and solid delivery is truly amazing. Solace In Murder
The last time I caught Solace In Murder was at Club Underground. What was impressive at that show, definitely doubled for the Metalfest. Solace In Murder pulled out all the stops. The effect that the black lighting had on guitarist Rand was crazy. His guitar is made of a florescent green acrylic and took on an incredible glow through the set. Check out the photo in the gallery set below. Hex Vortices
Unfortunately, all good things must end. However, the part wasn’t over! Hex Vortices took the stage to put a finally on the Mason’s Metalfest #2. These guys put all the raw sound and energy on the table and completely threw down a hardcore set. With Mason and his dad on stage of the entire set, Hex Vortices delivered an ‘in your face’ set with the crowd cheering them on. The band did a great cover of Metallic’s ‘Creeping Death’ which is one of Mason’s favorite songs. During the song, I looked around the venture only to see a sea of ear-to-ear smiles. Hex Vortices truly knew how to put the icing on the cake and close out an incredible day of Metal. Again, the Metalfest wasn’t all about the music, but the music was definitely an added bonus that maintained the energy throughout the day. I honestly don’t think Mason and his dad could have picked a better line-up.

Some people may look at this scene, see the people in it, and get scared away (hell, there are still some people that intimidate the hell out of me). I urge those people to find something like a Mason Metalfest. The amount of beauty that was inside Lee’s Liquor Lounge yesterday was enough to leave me speechless. The amount of people wearing the “Mason shirts” that were on sale says it all. We are just one big freaky family with hearts as big as the sound that pumps out of the PA.

I hope Mason enjoyed the crap out of his day yesterday because I know we all did.

And Mason, I hope to see you at a thousand more concerts in the future. You are a very, very special young man in this scene and we all love you.

The holy trinity of the Minneapolis music scene –  The Current, First Avenue and the newest member  – Go96.3, joined forces on Friday to celebrate their annual “Best New Bands.” Each year these three Minneapolis […]

Twin Cities based artist Devon Worley and band will appear at The 7th Street Entry on August 18.  Doors are 6:30 pm and music starts at 7 pm.  This is an 18+ show and ticket […]