Mill City Nights was slammed Wednesday night for Naughty By Nature as they stopped for a performance in Minneapolis. The floor on the main level was nicely packed and if you weren’t at your desired location way before the concert started, you had to forget about getting there. The show started a little late for a weeknight, with the line up including openers Lyric Marid and Carnage The Executioner. 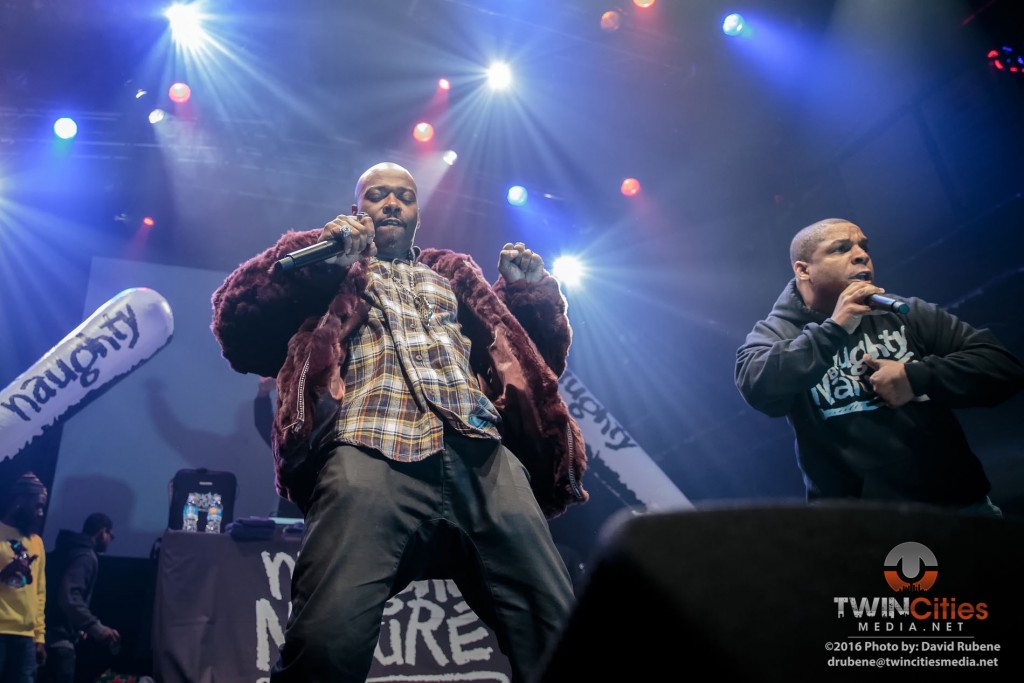 Lyric Marid kicked off the evening’s performance. Lyric Marid, formally known as Mic Lyric, is an aspiring artist from the South Side of Minneapolis, MN. The set was delivered with rolling lyric lines and solid hip hop inspired beats.

Up next was Carnage The Executioner. I could easily describe the set as one performer with a looping pedal. However, this would would show no respect to the pure artistic talent that unfolded on stage. At the center of it all stood Terrell Woods. From beginning to end, he used his talents to layout a highly sophisticated beat box rhythms  that would rival any well instructed band. Incredible old school sound, truly engaging, and deeply talented.

When Naughty By Nature hit the stage, they showed they really owned the headlining seat and they completely rocked it. Naughty By Nature is best known for their anthems and that’s what they gave the crowd. Drinks were a flying, bodies were a grinding, and people were just straight up having the time of their lives listening to a bunch of oldies but goodies. The crowd was awesome: half young, half old, and all there to appreciate some good ol’ hip hop. It’s amazing how to this day, certain songs, no matter how old, make a crowd move with delight. As you can probably imagine, it only took a few certain songs to make the night perfect like O.P.P, Hip Hop Hurray, and a bunch of others.

The Killers Are Triumphant And Understated At Xcel Energy Center Show

As soon as I walked into The Xcel Energy Center and saw the stage on Tuesday night, I was intrigued. It just felt so small and so understated compared to the previous two shows I […]

Winter is quickly approaching here in Minneapolis. Yes, I know that sounds dramatic but, if you live up here, you know it’s true. Because of this, I will find any concert to cover that’s outside. […]

In This Moment To Play Mankato On 5/21

In This Moment will be back in Minnesota on Tuesday, May 21st at the Mankato Civic Center Grand Hall. If you missed the band on December 8th at the Minneapolis Armory, when they were supporting […]