Walk Off The Earth will stroll into the Myth on May 18th for what should be a great Saturday night show.  They will be joined by special guest Gabriela Bee of the Eh Bee Family.  Doors are at 7pm, show at 8pm.  Hurry to get your tickets HERE to this all-ages show by May 7th to take advantage of the National Concert Week special price of $15 plus fees ($20 all-in).  Each ticket purchased online will also receive a physical CD of the band’s upcoming new album.

The band is still recovering from the loss of beloved band member Mike “Beard Guy” Taylor who passed away on December 29, 2018, just before the band was set to embark on their 2019 world tour.  The band will pay tribute to Taylor during their 2019 world tour, saying, “Mike loved our fans so much. We want to honor him and his legacy by continuing our world tour to bring the spirit of this memorial to our fans across the globe.”

Taylor’s family has partnered with MusiCounts, an organization that celebrates musical excellence and puts instruments into the hands of kids who need them the most, to collect donations in his name. A long-time supporter and advocate for MusiCounts, Taylor believed that all children across Canada should have access to music through their school and community. Donations can be made HERE .  Please consider donating to a great cause in memory Mike “Beard Guy” Taylor.

We often get asked what the meaning behind our band name is. What does Walk Off the Earth mean?

More than anything else, it’s a state of mind. When you’re deeply entranced by a collection of musical compositions and your day-to-day stresses become a lot less bothersome, you’ve walked off the earth. You forget that your boss is a dick-weed, that your neighbor is a racist…or even that your girlfriend has been spending a little too much time with your best friend! You let the pulsing rhythm, the soaring melodies and the lush harmonies take you away to a place where nothing can affect you. Walk Off the Earth with us!

Walk Off The Earth, the Juno Award winning indie-pop band known for their chart topping originals and unique covers of current hits, are putting the finishing touches on a new full length album, to be released in the early summer of 2019. Comprised of five multi instrumentalists (Sarah Blackwood, Gianni Luminati, Marshall, Joel Cassady, Beard Guy), Walk Off The Earth originally gained massive public attention when their interpretation of Gotye’s “Somebody That I Used To Know” went viral on YouTube, garnering over 180 million views. Since then, the band has released a string of successful original songs including “Red Hands” (#1 at AAA), “Fire In My Soul” and “Rule The World” (both of which went platinum in Canada), sold out venues across the globe and collaborated with some of the biggest artists in the world (Keith Urban, Snoop Dogg & Steve Aoki). Walk Off The Earth have been nominated for two Juno Awards, winning one in 2016, and appeared on television shows such as Good Morning America and Ellen.

The chemistry between the members of Walk Off The Earth is undeniable. Marshall, Sarah and Gianni’s individual vocal stylings mesh seamlessly with Taylor’s haunting harmonies and keys while soaring over epic melodic arrangements held together by Joel Cassady’s driving and prolific percussion work. Their independent spirit, unstoppable work ethic and awe-inspiring creativity has catapulted Walk Off The Earth into new and uncharted waters with only bigger and better things on the horizon.

Walk Off The Earth’s most recent original single, “Fifth Avenue,” premiered on Billboard.com. The track was added to Spotify’s “New Music Friday” playlists in over a dozen countries and garnered more than a million streams in the first week after the release. The band performed the single on both Good Day New York and a Paste Magazine & Daytrotter live session. Their rendition of “Girls Like You” by Maroon 5 won the 2018 “Best Cover” Streamy, beating out Greta Van Fleet, James Bay, Leroy Sanchez and Morgan Saint for the honor of receiving the award. Also in 2018, Walk Off The Earth released a holiday EP, Subscribe To The Holidays, which was the #1 charting independent release in Canada for the last week of November. 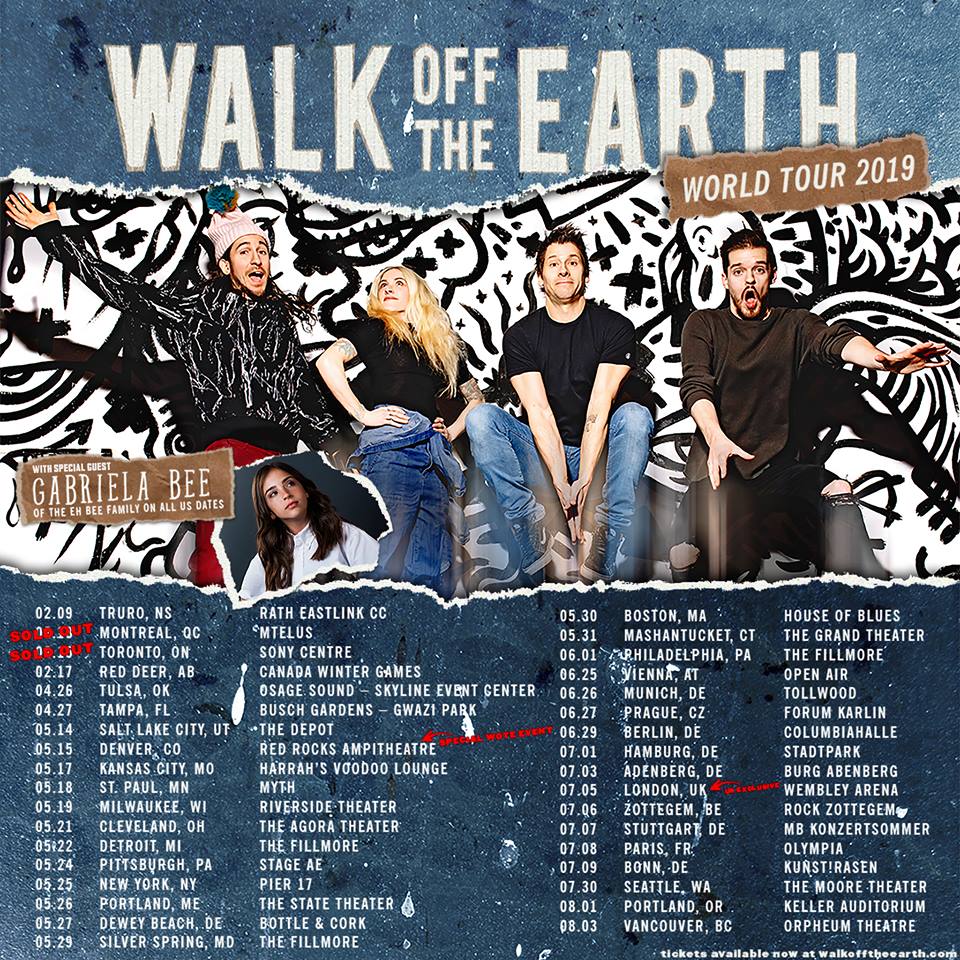 Daughter in the popular YouTube and Vine family known as Eh Bee. The family is also popular on Facebook and Instagram. The family YouTube channel has over 8 million subscribers. Also a musical artist, she has covered songs on her personal YouTube channel and on the Eh Bee channel.

I’m sucker for good synth pop and Minneapolis has some of my favorites. Tiny Deaths is one of them, yet somehow I missed that were working on a new album. I did a double take […]

One of America’s most iconic singer/songwriters is coming to the Dakota for two shows February 22.  The 7pm James McMurtry show is sold out.  However, limited tickets still remain for the 9pm show.  Tickets and […]