Violent Femmes were actively dominating the folk scene from 1980-2009 and finally made a comeback in 2013. In 2016, they made their first network TV live appearance in 16 years, performing “Memory” on CBS’ Late Show with Stephen Colbert as well as their legendary song, “Blister in the Sun,” with Colbert on vocals. The video went viral immediately. The band is currently recording their new album, which will be released later in the year.

Hailing from Wisconsin but having toured around the world, they have made a huge name for themselves with fans of all ages. Their recent popularity on the internet has brought in newer, younger fans in addition to the die hard, OG fans from the ’80s.

Playing with them will be local Teenage Strangler, the musical project of Dylan Lee Ritchie based in Minneapolis, MN, USA with many contributors. They have played at First Avenue quite a few other times in the past and are a force to be reckoned.

Make sure to catch their show on the 18th or another date on their Midwest tour so you can witness one of the most influential folk bands live! Tickets for First Ave are still available HERE 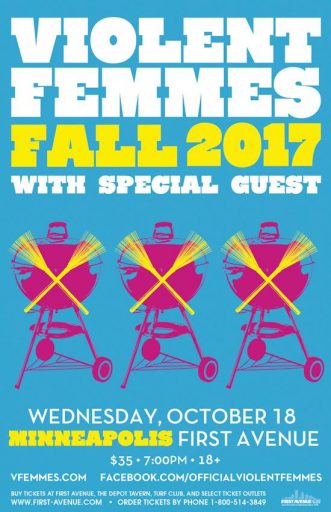 Looking for something to do in the Twin Cities this weekend after your Thanksgiving is in the books? Done stuffing your face with turkey and stuffing, then come get your fill of crowd pleasing local […]

Cosmo Sheldrake the will be playing the 7th Street Entry in Minneapolis on October 2nd with another 15 stops in other cities across the US and Canada. Tickets for this 18+ show are available here […]

Don’t miss the power trio, The Winery Dogs, when they are at First Avenue on Monday May 20th.  The Who Let The Dogs Out Tour 2019 is the supergroup’s first tour in nearly three years.  […]