Veruca Salt’s indefinite hiatus ended in 2013 with a Facebook status that read “for now let’s just say this: hatchets buried, axes exhumed”. It was a simple message that said a lot, which is indicative of their creative style. The group has been on a cross-country tour for their newest album Ghost Notes and they stopped at the Cedar Cultural Center Thursday night.

Playing songs from across their catalogue, the whole show sounded great. It was one of those rare times where you can say a band sounds as good or better live. It is so easy to tinker with voices and instruments in production, but the live band sounded polished and impeccable. Louise Post and Nina Gordon’s voices were smooth and silky whether they were harmonizing or thrashing about the stage. While the show was never slow or boring, it did have a slow burn quality. The band was mature and calm, and the audience was absorbed by the grunge tranquility. Their confidence radiated through the crowd, and it was easy to get lost while studying their calculated moves. It seemed nearly choreographed the way the women knew each other’s motions and moved in coordination. 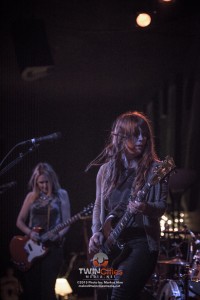 At one point Gordon needed to switch guitars while the song was still playing and with the poise of a Buddhist monk she calmly traded guitars with the tech and finished the song out. It was as if the audience wasn’t there; the crowd had no stress-inducing effect on the seasoned band. Their unshakeable confidence wasn’t arrogant or cocky. It was pure intimacy. Veruca Salt just had an undeniable level of confidence and cool in the high school gymnasium-like venue. I don’t know if it was the yellowish hue of the lights or the polished wood floor, but I half expected to see wrestling mats rolled up in the corner of the room.

When the band finished their main set Gordon and Post walked off the stage with their arms around each other. They didn’t have to say much, because the crowd knew what it meant. Just like their reunion announcement, it was a simple and straightforward message.

Set List:
Prince of Wales
I’m Taking Europe With Me
Black and Blonde
Straight
Laughing in the Sugar Bowl
Forsythia
All Hail Me
Empty Bottle
Come Clean, Dark Thing
With David Bowie
Don’t Make Me Prove It
Shimmer Like a Girl
Triage
Spiderman ’79
The Museum of Broken Relationships
Seether
Alternica

Bear’s Den wakes Minnesota from Hibernation at the Fine Line

With a name like Bear’s Den and hailing from the temperate climate of the British Isles one would expect a band to avoid touring the north of the country in the winter but somehow, they […]

Friday night, infamous folk rock band The Mountain Goats made a stop in Minneapolis to play a high spirited set at the historic downtown venue First Avenue. Opening up for the Mountain Goats was the […]