The world famous band TOTO will be in Minneapolis on Tuesday, October 1 at the State Theatre. This is one of their final 22 shows that comprise the North American leg of their nearly two year long 40 Trips Around The Sun Tour.  The show starts at 8pm.  Don’t miss your chance to hear this iconic band play their hit songs like “Africa” and “Rosanna” live. Tickets are still available HERE.

It’s without question, that TOTO have currently been in the middle of a major resurgence around the world over the past several years. Their Greatest Hits package titled 40 Trips Around The Sun – Legacy Recordings (a division of Sony Music) debuted at the top of the charts in eight different countries upon its release in early 2018 and kicked off what’s been the longest tour for years for the band.

Their European tour last year saw them performing to packed houses every night including sold out stops at the Ziggo Dome (17,000 seats) in Amsterdam and Royal Albert Hall in London. Another round of European shows happened this summer.

TOTO will now conclude the almost two year long 40 Trips Around The Sun Tour with 22 final shows in North America. The tour will kick off in Los Angeles on September 20th and wrap up one month later in Philadelphia on October 20th.

Historically, few ensembles in the history of recorded music have individually or collectively had a larger imprint on pop culture than the members of TOTO. As individuals, the band members’ performances can be heard on an astonishing 5000 albums that together amass a sales history of a HALF A BILLION albums. Amongst these recordings, NARAS applauded the collected works with 225 Grammy nominations. Band members were South Park characters, while Family Guy did an entire episode around one of their hits, and most recently Dax Shepard and Kristen Bell scored their honeymoon video to “Africa.”

As a band, TOTO has sold over 40 million albums, and today continue to be a worldwide arena draw staging standing room only events across the globe. With over 39 years together and thousands of credits and accolades to their names, TOTO remains one of the top selling touring and recording acts in the world. They are the benchmark by which many artists base their sound and production, and they continue to transcend the standards set by the entire music community, being simply synonymous with musical credibility. Their repertoire continues to be current via high profile usage on both broadcast television and in films. They are pop culture, and are one of the few 70s bands that have endured the changing trends and styles to a career enjoy a multi-generational fan base.

It is not an exaggeration to estimate that 95% of the world’s population has heard a performance by a member of TOTO. The list of those they individually collaborated with reads like a who’s who of Rock & Roll Hall of Famers, alongside the biggest names in music. The band took a page from their heroes The Beatles playbook and created a collective that features multiple singers, songwriters, producers, and multi-instrumentalists.

In 2015, Toto released their first new studio album in ten years – TOTO XIV. The album exhibited world-class musicianship, masterful arrangements, topical lyrical commentary, and melodies that the collective genius of Lukather, Paich, Porcaro, Williams and their assembled band-mates brought to life. It debuted Top 10 in nine countries around the world and became their most successful album since 1988 in the U.S. and UK.

In 2016 they released the Blu-Ray/DVD title Live At Montreux which quickly charted around the globe as well. After the band celebrated their 40th Anniversary in 2018, TOTO continues to celebrate their enduring career on their current North American tour. 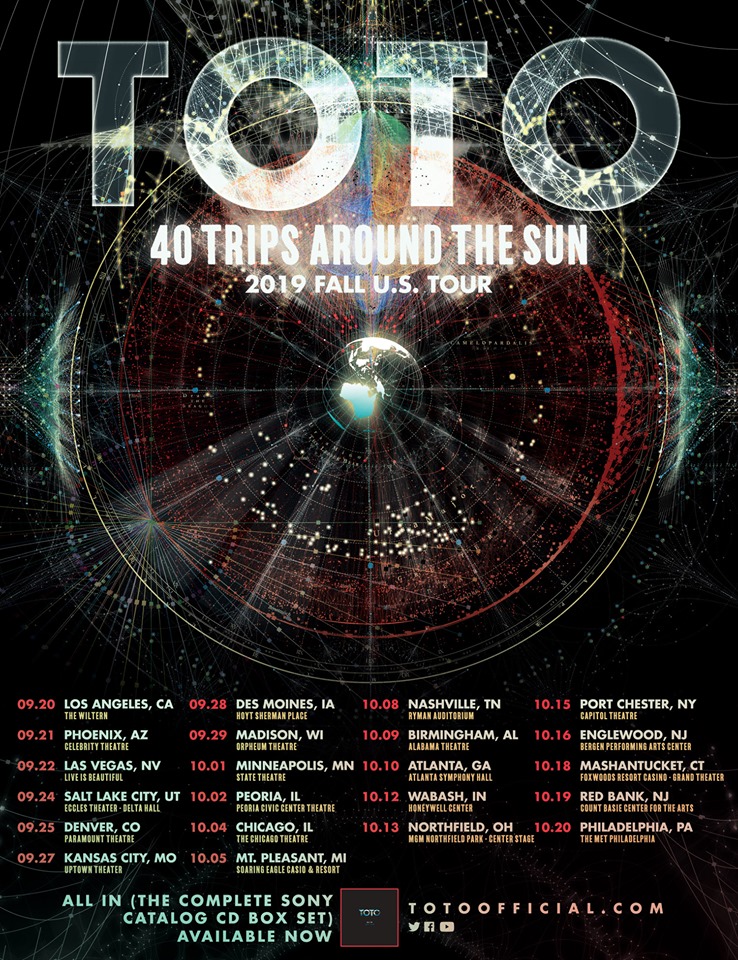 80/35- One Of The Things That Will Get Me To Visit My Hometown of Des Moines, Iowa

Well, another year of 80/35 is in the books. After taking last year off to experience the cluster that was Eaux Claires festival in Wisconsin, it was nice to go back to the beautiful 80/35 […]

I’ve been going to Emo Night events up here in Minneapolis for awhile now. What can I say, for a person who is constantly searching for that feeling of nostalgia, Emo Night hits the spot. […]

Can you believe it’s already a new week? The weekend seemed to fly by but I had to get one last show on Sunday before the reality of another work week set in. There were […]