Toad the Wet Sprocket is a band that falls in the “been there, done that” category. Founded in 1986 their heyday was in the 1990 with several platinum albums and the hit singles to go with them. After 10 years apart they re-united in 2008 and have since been touring and put out their first album in 16 years in 2013.

Opening for Toad was their touring keyboard player Jonathan Kingham. His ability to connect to the audience through his music and stories between songs raised the energy level quite a bit by the end of his set. 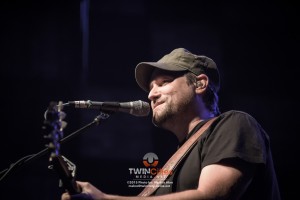 Toad the Wet Sprocket delivered their set in a cool and relaxed way. This was about their music and connecting with the fans, not about flash and gimmicks. Singer Glen Phillips was barefoot and in cargo shorts and brought a reusable water bottle. The audience was engaged from the first notes singing along to the songs they clearly knew well.

Set List:
Good Intentions
Woodburning
Crowing
Whatever I Fear
Something’s Always Wrong
Constellation
Stupid
Architect of the Ruin
Is it for me
Way Away
California Wasted
Nanci
Brother
Crazy Life
Anyone out there
Nightingale Song
All I Want
Fall Down

Encore:
Come Down
Bet on you
Walk on the Ocean

Interview: Jeanne Taylor will release her debut EP at Bunkers on 11/12

Jeanne Taylor (pronounced Jean) grew up surrounded by music. She is named after her grandmother who was a Minnesota Music Legend. Prince discovered her father, and her Aunts and Uncles have played or recorded with […]

Though the holidays are just around the corner, the concert calendar around the Twin Cities doesn’t seem to mind. The local gig list is showing no signs of slowing down and Saturday night was no […]