A sedate Friday night crowd began filing into First Ave’s Mainroom at 6pm -a multi-ethnic mix of friend-groups, couples, teens and their designated adults, and the occasional Uncle Fan.* Ages and genders ranged -though 20-something females were in high attendance. But all were united in purpose: to see the former member of Girls’ Generation live and in-person. And as with most concerts, people obeyed the gravitational pull of the stage and chose sight-lines over personal space.

The minutes ticked by towards showtime while the large projection screen masking the stage basked in rotating ads for upcoming shows, and a mix of recent-ish K-Pop tracks piped in softly over the sound system. Somi’s “Birthday” elicited light singing and a little swaying from the house (it is a bit of a bop), but the playlist’s effect -regardless of intent- was more ambient than mood-influencing. Folks passed the time chatting and admiring one another’s lightsticks.** Official Tiffany Young-branded tubular pink wands dominated, but a few variants of the Official Girls’ Generation Lightstick dotted the house. 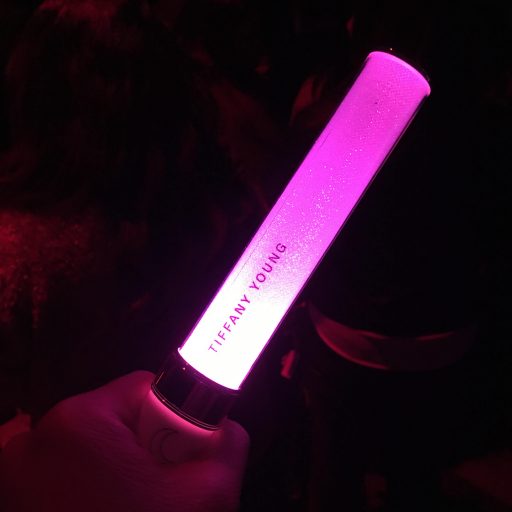 Precisely at 6:59pm chants of “TIFF-A-NY TIFF-A-NY” attempted to conjure the South Korean idol-turned-American pop singer onto the stage. To no avail. It would be a few more minutes.

As the screen ascended, anticipation became palpable. But the stage was dark. A giant 2D full moon could be seen hanging against the curtain at the back of the stage as the lights slowly rose. Flanking the tour’s titular Moon were a drum kit and multi-keyboard rig. (The keyboards also sported a Macbook, presumably for those songs when pre-recorded backing tracks would be needed.) Two male musicians entered and took up their places and began a slow-build instrumental on drums and guitar (apparently hidden among the keyboards). Lights came up fully, the music continued, and two female dancers emerged. But still no Tiffany.

And then, at last, she did enter, in long black tresses to match her black suit, black fedora with a black satin band, and chunky black platform heels. Cheers and screams rang out, and lightsticks swished through the air as Tiffany took her place center stage between her dancers and struck an elegant pose…with her back to the crowd. This only created more fan frenzy until the dramatic pause was finally broken with a launch into her most recent single, “Run for Your Life.” The whole house sighed with relief – the show had officially begun!

Tiffany and her crew worked gracefully through an hour and a half set performing much of her growing solo catalog, and a couple of covers -notably, Miley Cyrus’ “Wrecking Ball” and the Girls’ Generation’s hit, “Run Devil Run.” But Tiffany’s own “Teach You,” “Lips on Lips,” and “Born Again” were most rousing for the crowd.

Most of the K-Pop faithful outside of South Korea who have ever had the good fortune to see Girls’ Generation live would have done so in large concert venues. While the group has been active for over ten years, and has toured extensively throughout Asia, they have made very few concert appearances in the U.S. and were usually a part of a larger festival or multi-group concert (such as the SM Town Live World Tour shows). So, to spend an evening in a much more intimate venue such as First Avenue is really something special for fans.

I’m still taking in that this is First Avenue! …I’m a huge Prince fan!

First Ave as a venue seemed equally exciting for Tiffany who professed great love for Prince, and dedicated that night’s performance of her track “Runaway” to his memory. (Earlier in the day she used her Instagram Stories to share that she would be wearing purple eyeshadow for the evening show, and that her beloved dog was named Prince after the singer.) 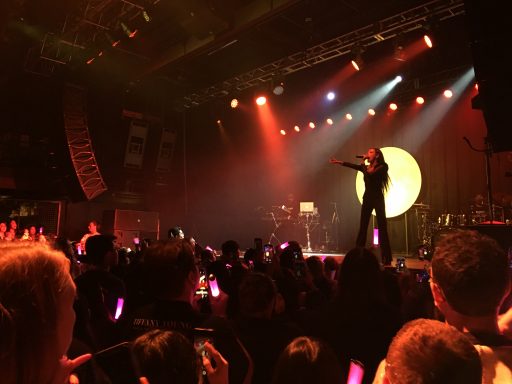 Heart of a Pop Princess

Tiffany’s South Korean idol training is still very much apparent in the way she carries herself and in her dancing -she makes it look quite effortless. She has retained all the poise, grace, sylph-iness, and consideration for fans of her former profession. Nearly every “I LOVE YOU” and “YOU’RE MY DREAM” shouted from the house was met with a pause for eye contact and a heart-felt echo of “I love YOU!” and “You’re MY dream!”

But Tiffany is a California native, and her American-ness is emerging in her new solo content, it’s subject matter, and her messaging. Between songs she paused occasionally to try to talk seriously with her audience about mental health. (Something she may not have been able to do had she stayed in K-Pop due to the stigmas and taboos that surround the topic in South Korea – even more so than in the U.S.) And when she could get through the barrages of “I LOVE YOUs” and “YOU’RE AMAZINGs” (“You’re MORE amazing!”), she shared some details of her new life.

Here are some snips:

“During my time back home on this new musical journey…it’s been a lot of ups and downs.”

“I am healing with you and I dedicate this next song [The Flower] to everyone who is healing. And you should heal.”

Self-love, self-acceptance, mutual support, and finding the things that you are good at are what Tiffany Young wishes her fans to pursue. Her image is grace, her aesthetic is kindness and self-awareness – she may have magical talking mice in her dressing room. This is Pop Princess magic in the best kind of way because it comes with earnestness.

Tiffany closed the show with a meaningful performance of “Born Again” – her anthem in pursuing a new career path outside of K-Pop. She saved the full version of “Magnetic Moon” and a reprisal of “Run for Your Life” for the encore. Between final songs she cheered:

And with a sincere “Thank you!” and “I love you!” and the deepest of bows, Tiffany wrapped her first show at First Avenue.

Bonus: The truest of fans are likely already in the know, but a limited-run photobook*** is coming: The Tiffany Young RFYL Gallery Book will be available for purchase from November 22nd to December 2nd. Details are posted on TiffanyYoung.com. 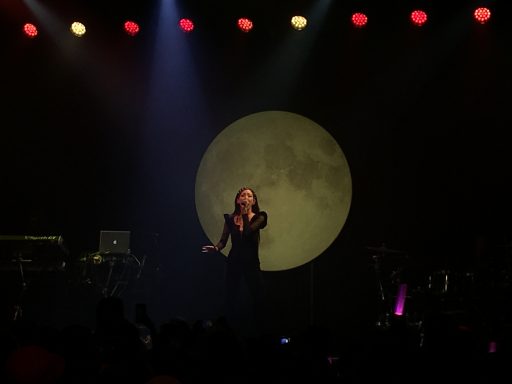 *Uncle Fans: A somewhat controversial term for middle-aged men who adore K-Pop girl groups. Someone is probably writing a dissertation on this phenomenon, but for now take a look at this 2013 TIME article: K-Pop’s Unlikeliest Fans: Middle-Age Males.

**Lightsticks: K-Pop entertainment companies are committed to building fanbases. This often includes establishing official fandom names and assigning official fandom colors for each group. And the larger companies will produce a unique battery-powered lightstick for their different groups. The light sticks (which were inspired by the colored balloons used by South Korean pop music fans in the 1990s) have become quite elaborate and some can even be controlled en masse by lighting technicians during live concerts, effectively becoming part of the show’s live visual effects. Mashable has a recent piece on the accessory: How lightsticks became a must-have item for K-pop fans. Or google “SHINee dome lightsticks” to find video footage of remote-controlled “Pearl Aqua Ocean” lightstick magic in action.

***Photobooks: physical K-Pop albums (CDs) typically come with elaborate packaging and often include a printed photo album of the group or artist. Occasionally a group or artist will put out additional photobooks outside of album releases. An artifact of K-Pop material culture.

Bad Suns Bigger and Better at Sold Out Varsity Theater

Bad Suns introduced their impressive new album, Mystic Truth, to their Minneapolis fans for their first show in town in nearly two years. Frontman, Christo Bowman, spoke the truth when he told those at the […]

My brother enjoys to concert. He may not go to as many shows as I do but he definitely goes to more than most and tends to have great taste when it comes to the […]