This is the second time the British pop/punk duo has come to Minneapolis and they weren’t taking any prisoners.

The Ting Tings started out their set in familiar territory, but were making moves into something new. They are no strangers to new directions as their latest album “Super Critical” (2014) has a heavy disco and funk influence. The duo was front and center on the stage with Spanish DJ (Carles) Boix looming behind. They played their hits like “Shut Up and Let Me Go”, “Hang It Up”, “Great DJ” and threw in a few of their disco grooves like “Do It Again”. Early on Boix was an accent, but midway through the set he was let loose on “Only Love” from “Super Critical”.  The remainder of the show was filled with samples and loops adding even more depth to the Ting Tings catalogue. 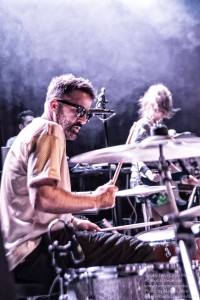 Overall the Ting Tings were in constant motion. Each song sent us in the direction of the next until we found ourselves fully submerged in a techno dance party that had been marinated in pop. It had the flavor of the first half of the set, but the DJ was now at the wheel. Early on the bass in the fairly small venue was too strong. It muddled the vocals and muted their punky attitude. It didn’t match the tone and had the effect of ketchup on a steak, but as the theme became more apparent the bass began to fit. The group began to hit their stride toward the end of the show. The final song of the night was  “Super Critical” and it was a reminder that the Ting Tings were still on the stage. The show was very conscious in the way that the Ting Tings recognized the audience’s expectations and used them to keep us guessing. They had a fully formed set that deliberately showed us the new direction of the Ting Tings. With an ever-changing music industry they showed us that they were not going to rest on their laurels, but use them as a stepping stool to the future of the Ting Tings. 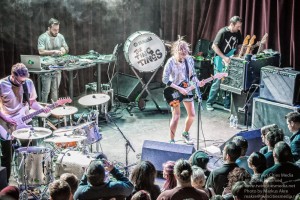 The tour is heading to Chicago on April 6th to play Thalia Hall. They are currently about midway through a run that started in California on March 23rd and ends a month later in Dallas. For more information check out their website here

Set List:
Do it again
Shut up and let me go
Hang it up
Great DJ
Communication
Give it back
Fruit machine
Only love
That’s not my name
Encore:
Wrong Club
Green Poison
Hands
Super Critical

Aegaeon and By The Thousands Punch Out Tuesday Night

By The Thousands was the band that got me out of the house last night. These guys have been making waves in the metal scene not just in the Twin Cities, but across the country. […]

The End of an Era: Prof Retires Raft at SOLD OUT First Avenue Show

Photos by David Rubene There were two huge shows going on last night. Behemoth was playing at The Cabooze and I knew my metalhead family would be out in full force to enjoy such a […]

Last night’s Lake Street Dive performance was my third sold out show in a row. It makes me so happy to see that so many people are getting out and enjoying live music but it […]