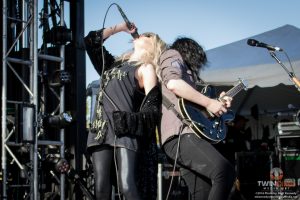 The Pretty Reckless “New Artist of the Year” award winner of the Radio Contraband awards 2014. Taylor Momsen and The Pretty Reckless just released their third studio album “Who You Selling For” in October 2016. They are currently touring the U.S.promoting their new album release. The Pretty Reckless have released monster hits like “Take Me Down”,”Heaven Knows” and “Fucked up World”. The Myth will certainly be rocking this November. Some general admission tickets are available.

Cadence & the Wolf trace their beginnings back to the summer of 2007 and something called GRRR (Girls Rock’n Roll Retreat). It’s a weeklong program that takes girls aged 8-16 of all skill levels and […]

Ben Rector closes his 2 year tour at the State Theatre

Hailing from Nashville, TN singer-songwriter Ben Rector embarked on “The Biggest Tour I Have Done So Far” to promote his album “Brand New”. How big? Well, “Brand New” was released in 2015, and yesterday saw […]

Not knowing what I should expect when walking into a show is pretty common for me. But last night I was not prepared for the fun that A Tribute To Shania Twain turned out to […]