The Not Guilty band is chock-full of musical powerhouses. From having worked with artists from John Legend to Minnesota’s own Prince, they have no shortage of impressive accomplishments. Founding member Layne Bellamy says The Not Guilty Band’s greatest accomplishment to date, though, is playing this year’s Minnesota State Fair. Bellamy told Emily Meenan all about the band’s Minnesota roots, “the groove,” and corn dogs. Check it out below, and catch them play the State Fair on August 27th and 28th!

Every member of The Not Guilty Band comes from such a different and diverse background. How did you find each other/meet?
Well I got fed up with playing in bands and following someone else’s vision on how music should be performed. In my opinion the bands just missed the mark. They were good bands with great musicians, but lacked a show. There is a reason why it’s called SHOW BUSINESS. So I called up one of my long time friends who happened to be one of the best percussionist I know, his name is Paul McGee, and told him I’m ready to start my own band and did he want to be a part of it? and his answer was yes. I asked did he know any good keyboard players and he bought Peter Hill. I then called Victor Reynolds (drums) because we have played in several bands together and have great chemistry. Vic was not available at the time as he was the Music Director for Ray Covington. So I called my Cousin Aaron Bellamy to play drums, and asked did he know any guitar players. He then called Tomas. I called my old friend Wayne Reed, and my ex student Aleesha Clomon, and David Anderson, & Billy Murray we all got together and The Not Guilty Band was born. Not long after starting rehearsals Aaron just didn’t have the right chemistry for this band. I called Vic back and he accepted. Also because of our years playing together I knew Victor and myself had similar idea’s how music should be performed and not just being a band but becoming an act. I asked Victor to be the Music Director of the band and he accepted.

You guys are all incredibly decorated solo artists, but you also manage to come together and work together so well. What’s your secret to making a band successful with so many unique components?
I guess we work together so well because my main focus when starting the band was chemistry. In my opinion chemistry between musicians is more important than individual skill. It doesn’t take the greatest musicians to have the greatest sound. It takes everybody in the unit working together and playing their role. and you have to feel the music. It’s a groove. My motto is The Groove is Everything, and Everything must Groove.

You’ve stated previously that one of your biggest influences is Michael Jackson. Who else has influenced you? Are there any local bands that you admire currently?

Oh I have many influences All the Jazz Greats, James Brown, EWF, Parliament. Willie Weeks, Larry Graham, Ron Carter, I could go on and on. Locally I was blessed to have GREAT musical mentors. The main one was Billy Holloman, Morris Wilson, Andre Lewis, and Johnny Willis. The bands were Midwest Express, Purple Haze, The Fabulous Amazers, Fly Tyme, so many influences. Band member Paul McGee tragically passed away before the band ever got out of rehearsal, and his Spirit is one of the guiding forces of this band. Sometimes I can feel his presence. Oh how much better we would be if he was still with us. Individually, each member seems to have worked with some very impressive national acts (John Legend, Chaka Kahn, Kidd Funkadelic, and Prince!) What are some of your biggest accomplishments together as a band? To date our biggest accomplishment is FINALLY being called to perform at The Great Minnesota get together. 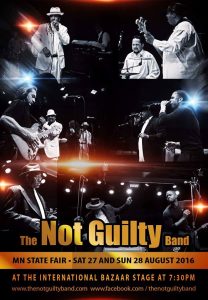 You’ll be playing the Minnesota State Fair on August 27 and 28th. Have you played the State Fair before? What are you most looking forward to about this opportunity?
No we have not played the State Fair before, its very exciting and I’m looking to put our best foot forward and rock the house, so when you leave our show you have been truly entertained, and also its the biggest venue in the state so many people who would never have been exposed to us will now be exposed. I hope they walk away from our show and say WOW thats a damn good band. I have to see them again. Whens your CD coming out? You need to be in Vegas.

A few members are Minnesota natives. Have you always gone to the State Fair? What are some of your favorite memories and things that you look forward to during the fair? What’s your favorite fair food?
I have been attending the State Fair pretty much all my life. My best memory from the fair is my Father and I being there and I got to go up and feel the nails on the bed of nails before the performer laid down on them, as a young boy that blew my mind and I never forgot it. I look forward to seeing the smiles on peoples’ faces, especially the kids. How can you go to the Fair and not eat Corn Dogs, or as we used to call them Pronto Puffs.

Finally, what should both longtime fans and newcomers expect and look forward to for your performance at the Minnesota State Fair this year?
They can look forward to a DAMN GOOD SHOW.