Saturday night in downtown Minneapolis offered no shortage of entertainment to concert goers, music lovers, and sports fans alike. The Minnesota Twins were facing off against the Los Angeles Angels, local rapper Brother Ali was at the Ice House, and Jason Isbell was right down the road playing a special, intimate show at First Avenue. Music fans could have taken their pick on where they wanted to spend their evening, but hundreds packed a sold out Fillmore to spend it with New Jersey rock band The Gaslight Anthem.

This show was a special one, as the band had previously been on an indefinite hiatus since 2015. The band temporarily reunited for a string of shows in 2018 to celebrate the 10th anniversary of The ’59 Sound, before resuming their hiatus. In March 2022, the band announced that they had reunited and returned to “full time status”, and that they had begun writing their sixth studio album.

Upon arriving at the venue, a large “THIS EVENT IS SOLD OUT” sign was promptly placed on the ticket counter. There was a buzz that felt tangible. Having never seen a completely sold out show at the Fillmore, I knew I was in for something special. So many fans had long awaited this moment, many chattering about the fact it’s unknown if they will get to see the band again after this show. It was definitely a night fans weren’t going to take for granted.

Opening the evening was Scranton Pennsylvania’s Tigers Jaw, led by Ben Walsh and Brianna Collins. It was my third time seeing the band, and they did not disappoint. Tigers Jaw’s catalog boasts some raw pop punk classics, but their set featured newer songs such as “Hesitation” and “Cat’s Cradle”. Dreamy, groovy, and rocky, it was a pleasure to see them on stage again.

After Tiger Jaw’s set, the venue temperature quickly started to rise as bodies tightly packed the walls of the Fillmore, and GA floor space became a precious commodity. It also became apparent that the average height of the crowd must have been 6’3”. I was surrounded by a sea of very tall people, and had to dance around to find a sliver of a sightline to the stage. Maybe that’s just the Scandinavian genes of many Minnesotans, or maybe it’s just the crowd of New Jersey rock fans.

The Gaslight Anthem started their set with with slower tune “Have Mercy” before picking up the pace with “Old White Lincoln” and “Handwritten”.

Fallon acknowledged he lost his voice completely a few days ago and was unable to play Colorado a few nights prior. “You know… the devil himself crawled into my throat and took my voice…” Fallon said. “So if it sounds a little weird you definitely can’t get a refund”.

When jesting about his lost voice, Fallon also gave a nod to the local punk scene by saying,  “You gave us The Replacements so we’ll give you 35% (effort), and I guess Soul Asylum and Hüsker Dü is the other 65%”.

Additionally, five songs into the set, Fallon briefly stopped the show and announced they had the wrong setlists on stage. “This setlist is from Kansas City, Missouri! No wonder I was so confused when I looked down to see what we were playing next. I wrote a setlist for tonight! Not some other city you guys don’t care about.” The crowd cheered. “The person who printed these setlists is buying all of us pizza tomorrow. Better get your wallet out now!” Fallon said.

After High Lonesome, the band adjusted and seemed to be on course with the correct Minneapolis setlist. The next hour and a half seemed to fly by quickly. The band was tight, Fallon’s banter with the crowd was funny, and everyone seemed to be having a great time playing their songs again.

The back half of Gaslight Anthem’s set packed a punch, with “American Slang”, “45” and “59 Sound”. For all of these songs, the crowd erupted into boisterous singing and cheers and dancing overtook the audience. As I looked around the room, I saw smiles, laughter, and even tears. It was obvious this reunion show was not only a fun Saturday evening for many, but a show that really meant a lot to a select few.

While it may be a question whether or not the Twin Cities will see The Gaslight Anthem together again or not, it definitely felt like a blessing to spend the night at the Fillmore with so many appreciative and happy fans. “We’ll see you again very soon” Fallon said before departing the stage. Let’s hope he’s right. 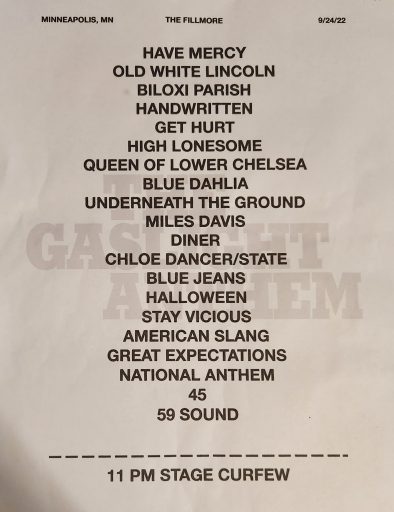 Australian Jarryd James played at The Fine Line Saturday night, opening for Meg Myers – check out our review of her show HERE. His set was modern and emotional. His music has the clean and […]

It’s no shock that I am a nostalgia seeker. It’s not that I enjoy living in the past but there is no denying that I find a complete sense of comfort in the music from […]