Any thoughts of this being “yet another concert” vanished within seconds of Flaming Lips frontman Wayne Coyne coming on stage. He announced that there would be a few minutes delay as he had been hydrating backstage and now needed to be have his reflective duct tape suit cut in strategic places so he could relief him self or risk an accident on stage. Freshly drained and re-taped he and the rest of the Flaming Lips kicked off the set in spectacular fashion a few minutes later.

The evening was dedicated to their album “The clouds taste metallic” and would be filmed for a project. Since many the songs would be performed for the first time in years, Wayne announced that if they did not like a take, the band would just have to re-play the songs and hoped the fans would not mind. Judging by heir reaction, they certainly did not. A Flaming Lips show impacts all your senses and should be on every music fan’s bucket list. Even if you are not into psychedelic rock the joy and enthusiasm both the band and the fans exude makes this a special experience. 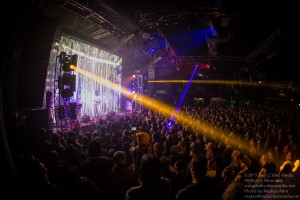 Saturday’s Green Day concert came in with a “concert of the year” aura. It not only lived up to its hype, but was also one of the most energetic shows you’ll see. The SOLD OUT Xcel […]

After The Burial Bring It Home at Skyway Theatre

It was a little weird walking into Skyway Theatre for a metal show. Band tees and patch jackets filled the venue verses the normal poi spinners and eclectic outfits. I forgot about that almost immediately […]

If There Is A Metal Heaven, Ozzfest Meets Knotfest May Be The Entry Point (Preview)

Ozzfest Meets Knotfest will take place September 24th and 25th at the San Manuel Amphitheater in San Bernardino, California. The 24th will be headlined by Black Sabbath and include Disturbed, Megadeth, Opeth and Black Label […]