There were two huge shows going on last night. Behemoth was playing at The Cabooze and I knew my metalhead family would be out in full force to enjoy such a legendary band and see some of the greatest local metal bands the city has to offer. Downtown was the ESPN X Games kick off show featuring Prof, Aesop Rock and Dem Atlas. Although I knew I wouldn’t know many people at the show, I knew that the Minnesota brand of hip-hop I’ve come to love would be alive and pumping throughout First Avenue. I had a decision to make and it wasn’t going to be an easy one. After a couple of drinks with some girlfriends and meeting up with a buddy, I made my way into First Avenue for the Prof show.

Dem Atlas opened up the late Thursday night show. I’m always struck by Joshua Turner’s (Dem Atlas) energy. He never fails to turn a super crappy day into one of the best days ever with his contagious smile and intense yet comforting demeanor. The way a line of words turns into an almost primal screech seems to be Joshua’s signature and it gives me goosebumps every time. You could hear and feel the passion coming off the stage throughout his nearly forty minute long set and it had the completely sold out crowd going crazy.

Following up Dem Atlas’ energetic performance was local favorite Aesop Rock with Rob Sonic in tow. My favorite thing about Aesop Rock (and the reason I love Minnesota rap and hip-hop so much) is because of the lyrics. They are real, relatable, and honest. Beyond the amazing lyrics, Ian Bavitz’s (Aesop Rock) voice is something unforgettable. It has a very dark and intense vibe to it but, because of the lyrics, has a very approachable feel to it at the same time. The beats behind his raps were aggressive and much deeper than those that were blasted behind Dem Atlas but that only helped differentiate the two acts. 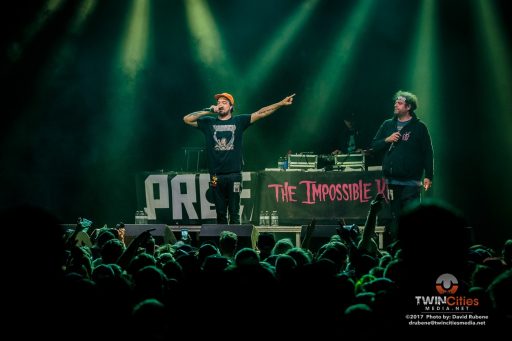 Joining Ian on stage was Rob Sonic. Rob is a familiar face in the hip-hop scene and I’ve had the pleasure of seeing him perform a couple of times with Ian. Last night he seemed to essentially play the role of hype man but his energy made it feel like so much more. The chemistry between Rob and Ian is something I have always envied. They don’t come off as just two rappers, more like two best friends that share a passion for music. Add a surprise appearance from Open Mike Eagle into the mix and you got a truly unique sound and energy that kept me wanting more. When Aesop Rock’s set was over and done, I was a little bummed but knew that the best was yet to come.

Wrapping up the night was local favorite Prof. I don’t know that I can count the number of times that I’ve seen this guy live but I can tell you that it never gets old. My buddy that was with me turned to me just two songs into Prof’s set and pointed out the fact that he had never seen me smile so much before. What can I say? Prof just seems to have that effect on a lot of people.

Prof comes off as dorky, quirky, and adorable all wrapped up with a bow of personality. The second he took the stage I could feel a giant smile creep across my face that was going to stay there for the entire hour long set. Just like that, it was off to the races for Prof as he wasted no time to jump into his performance complete with confetti being shot out at the crowd. Within an instant I knew I had chosen the right show for my mood. I needed to see Prof’s goofy smile and watch his quirky dance moves. It was perfect. 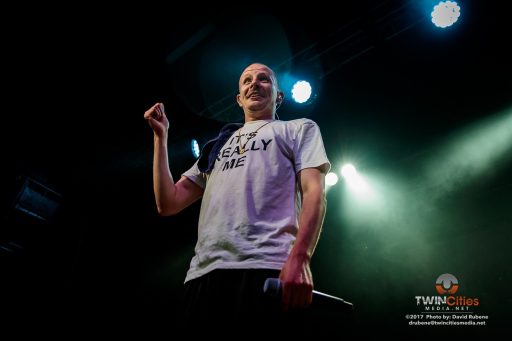 Prof played through his hour long set with his DJ Willie Wonka behind him. These two make a force and even though Willie seems to take a backseat to Prof’s larger than life personality, you can not ignore the infectious smile that comes from behind the laptop and turntables. With an undeniable sense of passion that was the theme for all of the performers last night, it was hard to turn away from the stage. I didn’t want to risk missing a single goofy dance move from Prof or a charming smile from Willie Wonka… I didn’t want to miss a thing.

Prof ended his dynamic set with his signature move of jumping into a raft that the crowd moves throughout the venue. He has always done this almost every single time I’ve seen him live and it never fails to make me laugh. I mean, just think about it– a grown man crowd surfing in a giant inflatable raft while throwing confetti out on the crowd. It’s his shtick and it works for him. For some reason, Prof said that he is laying the raft to rest and last night would be his last time doing it. I could feel my heart break a little bit with those words. It sounds dumb and I know it doesn’t have a thing to do with the music but I always looked forward to seeing Prof crowd surfing in that raft. It’s going to be weird to go to his shows and not see that but I am so grateful that I got to experience it one last time.

I could have gone to The Cabooze last night to hang out with my metalhead family and gotten completely lost in a moshpit with the best of friends. I could have listened to angry music that helped me get some built up aggression out but that’s not what I needed. I needed a show where I could let loose, smile, dance, and just completely forget about everything else going on in my life if only for a couple of hours. That’s exactly what I got.

For the third year ESPN brought the X Games to US Bank Stadium and fans were excited to see their favorite and new events as well as new features. Speaking of new features, Wendy’s is […]

There was an undeniable sense of something as soon as you walked into Amsterdam Bar & Hall last night. I’m not quite sure what words to use in order to describe that something but there […]

Summer Cannibals Serve a Rock and Roll Feast At The Entry

As summer wanes around these parts, the pace of things we need to do seems to pick up.  The evenings cool a bit quicker. Minnesotans begin to hustle before the busy outdoor months draw to […]