Make the last day of April memorable by coming to the U of M campus to see the Bad Suns on April 30th at the Varsity Theater. The band is touring to support their latest album, Mystic Truth, and will be joined by Minneapolis’ Maple & Beech.  Doors open at 6pm and the all ages show starts at 7pm. Tickets are available HERE 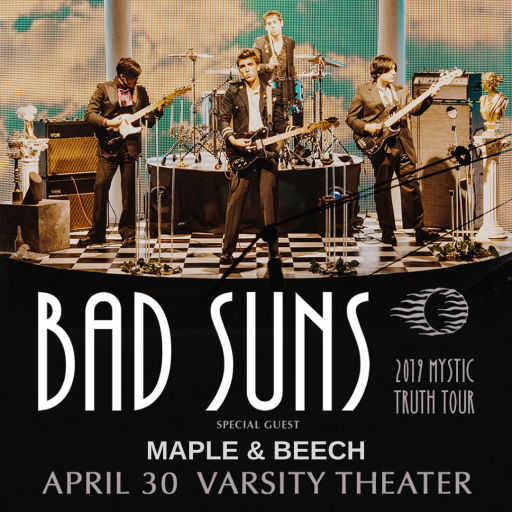 On March 22nd the Bad Suns released their new album Mystic Truth, their first ever album for Epitaph Records. As a marker of a new era for Bad Suns, it’s a remarkable step forward that’s at once melodically sharper and more emotionally complex than anything they’ve done before.

Produced by Dave Sardy (Oasis, The Head And The Heart, The Black Angels) and recorded at the legendary Sunset Sound and Sardy’s home studio, Mystic Truth finds Bad Suns synthesizing a range of disparate influences — R.E.M., Kate Bush, Blue Nile, and Mikhail Bulgakov’s magical realist masterwork The Master and Margarita — into a restless, defiant sound that straddles rock & roll, post-punk, and pop. The album’s title was inspired by a Bruce Nauman art piece that vocalist Christo Bowman stumbled upon at the Tate Modern, a neon-and-glass sculpture that spells out a possibly paradoxical statement in blue spiraled cursive: “The True Artist Helps the World by Revealing Mystic Truths.”

Throughout Mystic Truth, the band exhibits a refined sense of songcraft and a willingness to infuse their timeless sensibilities with adventurous sonic detours. Whether it’s the stuttering rhythmic bridge on “A Miracle, A Mile Away” — an idealized modern merger of the Brian Eno-produced eras of both U2 and Talking Heads — or the sprightly-yet-melancholic waltz of “Darkness Arrives (And Departs),” Bad Suns are torch-bearers for a brand of anthemic, open-hearted yet daring rock & roll long thought to be endangered. Mystic Truth is strong evidence that it’s in good hands. Album opener and lead single “Away We Go” has already attracted praise from the LA Times (“a scream-along anthem…post-punk with a hint of the Boss”), Alternative Press, and more.

Formed in Los Angeles County when they were teenagers, Bad Suns have come a long way since catching their first big break from LA radio institution KROQ after dropping a demo off in their mailbox. The band – hailed by NYLON as “hard-driving with heart” – performed on Kimmel and Conan, broke the Top 25 on the Billboard 200, toured with Halsey and The 1975, played Coachella and other marquee festivals, and sold out headlining dates across the globe. Their previous album, 2016’s Disappear Here, was hailed by Alternative Press as “their most dynamic and introspective work yet,” adding “Bad Suns are merely getting started in their quest for world domination.”

Just out of high school when he made his commercial debut with the ballad “Location” the non-traditional R&B singer and songwriter Khalid attracted a large following. With an undemonstrative but heartfelt vocal style and a […]

The winter blues are starting to get to everyone here in the Twin Cities. You can literally feel it in the air and, with a looming Snowpocalpyse scheduled to hit in just a couple hours, […]