Welcome Back Bash at the Varsity – EVENT INFO 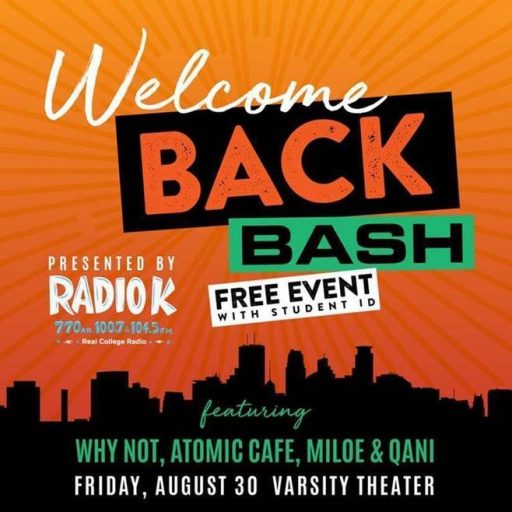 One of our favorite concert venues in the Twin Cities resides in the heart of the Dinkytown. The Varsity is welcoming back UMN students with a free (with student ID) bash featuring music by  Quani, Miloe, Atomic Café, Why Not

Free w/ Student ID | $5 Entry at the door without ID

Dessa at the State Fair – INFO 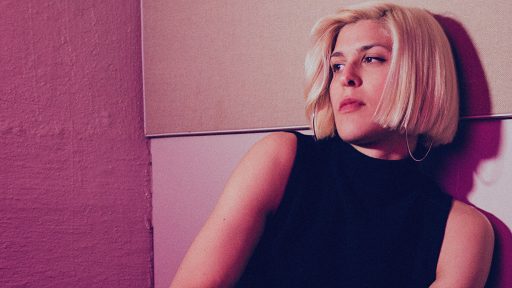 Hometown hero Dessa, the rapper, author, poet, monologist, and entrepreneur whose built a career “breaking the rules of rap” (NPR Music), will play the Minnesota State Fair Leinie Lodge Bandshell Stage on 9/1 and 9/2 (8:30) with her full band. Her new album, recorded live with the Minnesota Orchestra – Sound the Bells: Recorded Live at Orchestra Hall – is out November 8th, and she’ll be playing her whip-smart, literary raps with an extra dose of creativity gained from the ambitious arranging she worked on with the Orchestra. 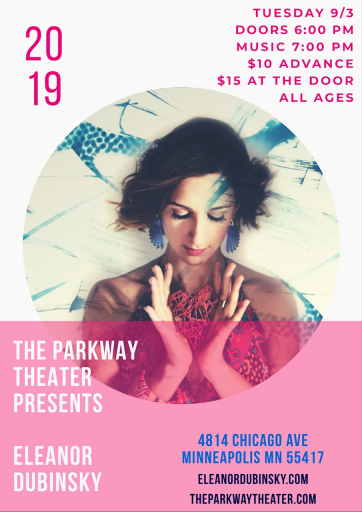 One of NPR Alt. Latino’s four 2018 picks for New Spring Music, Eleanor Dubinsky is a “multi-lingual musician who can capture the emotions and soul of a community in song.” (Felix Contreras). A vocalist, guitarist and cellist, Dubinsky’s music lives at the tender edge where jazz, world, and pop sensibilities meet emotionally forthright songwriting. Born in St. Louis, MO and based in New York City, her sound expresses both her mid-western roots and the formative time she has spent in South America, Western and Central Europe, and most recently, Portugal and Cape Verde. The polyglot composes in English, French, Spanish and Portuguese, bringing her linguistic and cultural literacy into dynamic compositions exploring the fragile links between human emotions and responsibility. Eleanor takes to heart her chosen roles as composer, bandleader, cultural interpreter and activist. Her lyrics about self-discovery as well as issues of immigration and contemporary politics create a lively, inviting sound that builds bridges between diverse audiences. Eleanor’s music has been featured on NPR, MTV, Lifetime and Animal Planet; ads for American Express; and on radio stations through the world. Her global appearances include the Lincoln Center’s Boro Linc: La Casita festival, the 4+4 Days in Motion festival in Prague, the Philadelphia International Festival for the Arts, the Puerto Morelos Music Festival (Mexico), and concerts in Costa Rica, Portugal, France, Mexico, Cape Verde and Senegal. She and her ensemble regularly perform in New York City.

Dominic Fike with Deb Never at the Fine Line – TICKETS 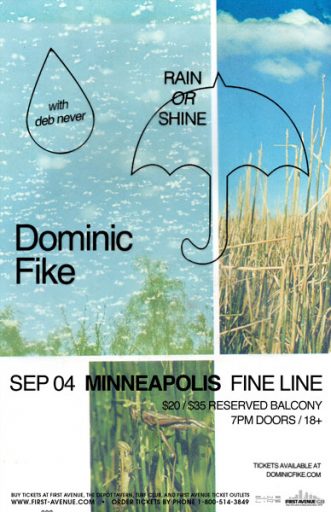 Dominic Fike is aware of the demand that’s mounted for him to put his music online ever since he posted a batch of self-produced bedroom demos to Soundcloud in 2017, and then swiftly pulled them down. “People are mad at me. It’s like owing your friend money,” says the 22-year-old. “You can’t really talk to them about anything else until they get it.”

Fike wasn’t really aware of the buzz that had accumulated nearly overnight until he finished serving a jail sentence earlier this year. While on house arrest for three months, Dominic wrote, produced, and recorded a set of songs in a friend’s bedroom, some of which would later release on Don’t Forget About Me, Demos. The demos are a rare glimpse at an artist on the precipice of ubiquity, one so specifically him, notable for his self-assured singing, dynamic instrumentation and compelling songwriting.

“3 Nights” sets the tone for Don’t Forget About Me, Demos, an effortless slice of pop with a tropical bent that coasts on acoustic guitars and a Fike’s elastic, singsong flow. The rest is a composite of his influences filtered through his artistic lens: “Westcoast Collective” takes cues from Weezer, all spidery rock guitars and intermingling vocal harmonies, while “King of Everything” harnesses both the breezy beach-rock and angst of Sublime, a diarist rumination on ruling a domain when you find yourself alone.

Earlier this Summer, Deb Never shared her most recent single and video for “Ugly” (produced by Dylan Brady) via The FADER. Last Week, Deb became the first female featured vocalist on a BROCKHAMPTON song with the release of “NO HALO.” Next Friday, August 30th, Deb will release her debut EP House on Wheels via Shlohmo’s WEDIDIT label. House on Wheels is the inaugural showcase of Deb Never’s grungy, punk-meets-rap aesthetic and features production work from Dylan Brady, Shlohmo, and D33J. Deb’s voice, noticeably distinct, rides triumphantly off the back of its melodic uniqueness. Songs build from emptiness around a single guitar, Deb’s most natural instrument, and utilize current production etiquettes that bring them into the now.

Las Cafeteras at the Cedar – TICKETS 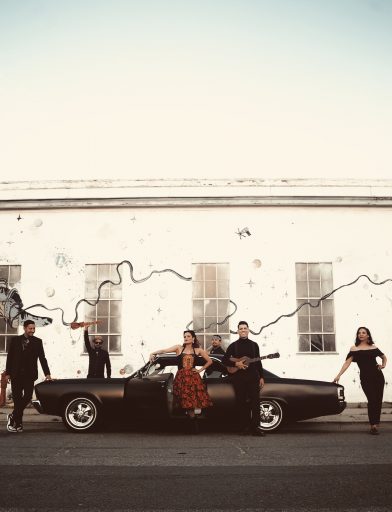 Las Cafeteras are known for their unique Afro-Mexican instrumentation and the mixing of Mexican folk with the multi-cultural soundscape of Los Angeles – Cumbia, Rock and Hip Hop with a little R&B. The band is comprised of Denise Carlos (Vocals, Jarana Primera, Zapateado, and Glockenspiel), Leah Gallegos (Vocals, hand percussions, Zapateado, and Melodica), Hector Flores (Vocals, Jarana Tercera, and Zapateado), Daniel French (Vocals, Jarana Segunda, and Keys), Jose Cano (Drums and Cajon), Xocoyotzin Moraza (Requinto & Vocals) and Jorge Mijangos (Bass & Vocals). The new song and theme of the upcoming EP, is a collection of cover songs that influenced the Chicanx and Latinx band growing up in L.A. Taking on the American classic “Angel Baby” ballade sonically pushes Las Cafeteras into new but familiar sounds. “It’s one of those songs that was on the Low Rider Oldies mix tapes I grew up with.” Daniel recalls, “Back in the day at family parties in North-East L.A. our parents would bump oldies and Motown a lot. So, for me it’s part of my soundtrack to growing up in L.A.” Denise adds, “it reminds me of singing along to oldies with my mom while she did my hair when I was in high school. It was moments like that made our relationship special and sweet.”

Looking back at the new music about to be released, Daniel reflects, “We love oldies. Also, in a time when immigrant kids & babies are locked in cages without soap and clean water at our borders, when there’s so much ugly hate and pain in this moment, what else can remind us to shine like the power and devotion of love?” he continues, “Love is something our world needs so much more of right now. From the city of Angels to the worldwide.” 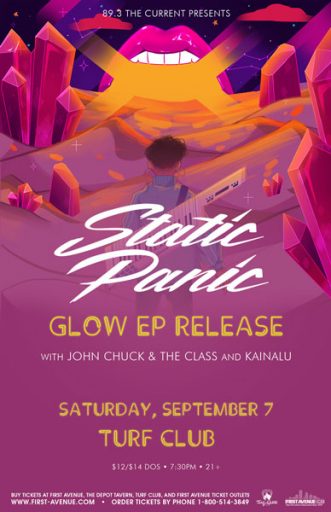 Glow comes at a very interesting juncture in self-development for the squad called Static Panic. It comes at a time of love and loss. A time of transformation. A time of new paths and new challenges of the ever changing world around us.

In a world where the strongest connections we have is with our phones and the people behind them, songs like the tracks, “SMS” and “It Really Do Be Like That (Sometimes)” serve as a meaningful and anthemic funk reminder that the empathy of the world is tangible, even when you can’t reach out and grab it. “Sinful Delightful” serves the catchy pop sauce that drives heavy the lighthearted finishing touches of the journey towards the progressive title track, “Glow.” This EP collectively embodies the variety of influences found in Chrome, but with a sense of honesty and fellow feeling that intends to drive a heart full of light.

Jack Broadbent + Chicago Plays The Stones at the Dakota – TICKETS 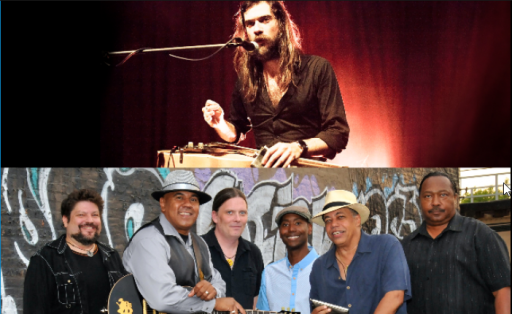 Hailed as “The new master of the slide guitar” by the Montreux Jazz Festival and “The real thang” by the legendary Bootsy Collins, Jack Broadbent has spent the past year wowing international audiences with his unique blend of virtuosic acoustic and slide guitar, and poignant folk and blues inspired vocals.

Chicago Plays The Stones is an exhilarating, high-energy live stage performance that presents its audience with classic Rolling Stones songs arranged in the Chicago blues styles ranging from the early-traditional to modern-contemporary.

Chicago blues harmonica master Billy Branch, the current reigning king of Chicago blues harmonica, brilliantly reinvents blues classics first recorded by the immortal Little Walter on his brand new Alligator Records release, Roots And Branches–The Songs Of Little Walter. He will perform as part of a multi-artist revue in a concert entitled Chicago Plays The Stones . The band, featuring Branch, Ronnie Baker Brooks and friends, will be appearing at Dakota in Minneapolis on Saturday, September 7, 2019.

Sheer Mag and Empath at the Turf Club – TICKETS 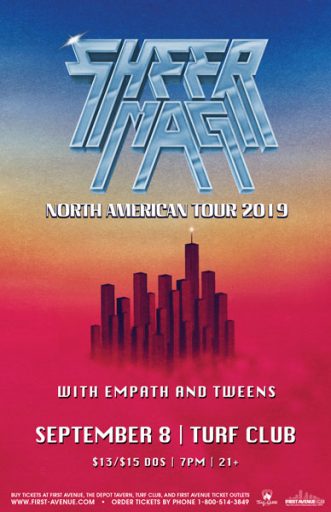 Sheer Mag’s dizzying rise initiated in 2014, when the Philadelphia band self-released the first of three 7-inches and started playing the Northeastern DIY circuit. Ironically, the music stood apart because it sounded so familiar. Indebted to ‘70s arena rock, power-pop, and proto-metal, Sheer Mag’s songs reminded a lot of us of the music we grew up with, but maybe couldn’t relate to because it was big, brash, and unapologetically macho. Sheer Mag reclaimed some of that energy without perpetuating the toxicity.

On their debut album, Need to Feel Your Love (2017), the band surveyed their contemporary political landscape through the lens of history. Singer Tina Halladay transported herself back to the 1969 Stonewall Riots, denounced redlining practices that undermine the popular vote, and paid homage to White Rose activist Sophie Scholl. On paper, it’s a mouthful, but accompanied by guitarist/lyricist Matt Palmer, guitarist Kyle Seely, and bassist/producer Hart Seely, those songs became hook-laden rallying cries.

Two years later, Sheer Mag have returned with their sophomore album A Distant Call. They’re still writing about surviving our current hellscape, but this time around, the politics get extra-personal. The album verges on being a concept piece, and the protagonist resembles Halladay herself. The songs document a particularly alienating time in her life when she was laid off from a job. Broke and newly single, her father (with whom she had a fraught relationship) passed away, leaving her with more wounds than felt possible to heal.

Empath goes far beyond the sound of birds faintly chirping. They’re a band that writes songs like communing with nature, bringing all their fuzzed and tripped out idiosyncrasies into harmony. Empath began in 2016 when Garrett Koloski, Em Shanahan, and Catherine Elicson moved into a house in West Philadelphia together, with Randall Coon joining shortly after.

Even with the simple vision to shred, there’s a natural sensitivity in the way Empath communicates. Between the contrast of Elicson’s lush, almost delicate vocals, Koloski’s boisterous drumming, and the half-harmonious wash of guitar and Shanahan and Coon’s synths, Empath equips us with a healthy dose of emotional repose.