Fredo Disco at the The Garage – TICKETS 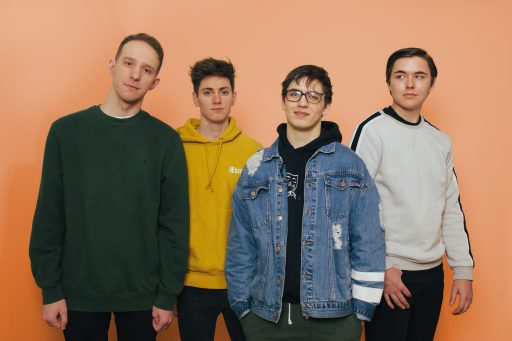 Last year was a very busy year for Fredo Disco. In addition to their first-ever tour supporting Hot Mulligan and Belmont, they announced their signing to Public Consumption Recording Company, a joint venture with Elektra Music Group, and re-released their debut album Very Cool Music for Very Cool People. Check out the official videos for “prom, post prom, etc.,” “jimbo” and “somebody else,” which premiered via Alternative Press. In November, the band released “never tell u,” with a companion animated video and finished out 2019 touring with Tiny Moving Parts and Standards.

Billy Raffoul at the Entry – TICKETS 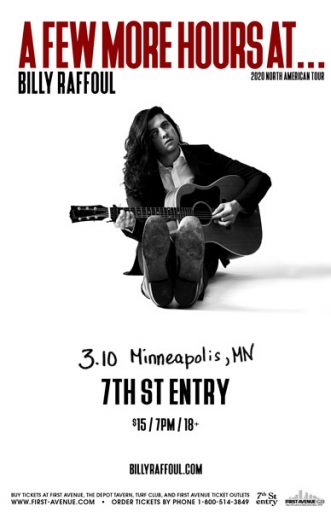 Billy Raffoul’s anthemic debut single “Driver” serves as a potent calling card for the 22-year-old singer, songwriter, and musician. His signature sound is a rough-hewn, low-timbered rock and roll that nods to the likes of Jeff Buckley, Neil Young, and Joe Cocker, and is powered by Raffoul’s gravelly, soulful voice and deeply felt lyrics. “That’s one thing for me — a song needs to be about something I’ve experienced or something someone close to me is going through,” Raffoul says of his sources of inspiration. “I find myself going back to moments of time from the past, picking apart these little experiences and building them into bigger things. I want people to know that the songs are genuine, that they’ve been lived in.”

“Driver” is one of those lived-in songs. It was inspired by his family picking up a hitchhiker one night after Raffoul and his musician father Jody played a gig on Pelee Island in the middle of Lake Erie. “This guy was really out of it, so he ended up staying with us for a few hours,” Raffoul says. The following weekend Raffoul told his story of the hitchhiker to songwriter Simon Wilcox and songwriter-producer Nolan Lambroza during a writing session in Los Angeles. “We turned it into something a little more sentimental, in that maybe I’m not singing about someone being lost on the side of the road, but maybe someone lost in life who doesn’t know where they’re going or what they’re supposed to be doing,” he explains. 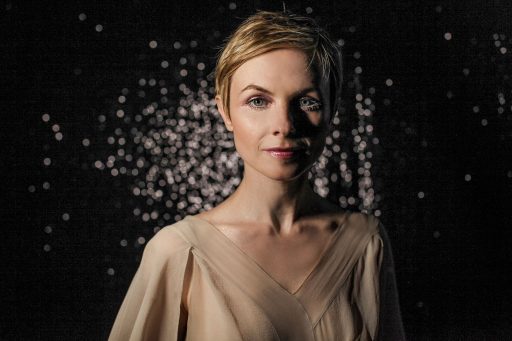 Edmonson’s new album Dreamers Do is out now via Spinnerette Records; listen/stream the album HERE. She is currently in the midst of a US tour, seeing stops in Los Angeles, Washington DC, Boston, New York City amongst others. You can find a full list of remaining tour dates below. Dreamers Do reached the #1 spot on Billboard’s Traditional Jazz chart, and the album debuted #1 at iTunes Jazz, #2 Most Added at Jazzweek and was named Deezer’s Album of the Week upon release.

The album combines mid-20th century Disney songs (from Alice in Wonderland, Cinderella, Peter Pan, Pinocchio, Bedknobs on Broomsticks, Mary Poppins, Babes in Toyland), with familiar classics (“What A Wonderful World” as well as “All I Do is Dream of You” from Singin in the Rain), and features two new original songs from Edmonson (“Too Late to Dream” and “Someone’s In The House.”) 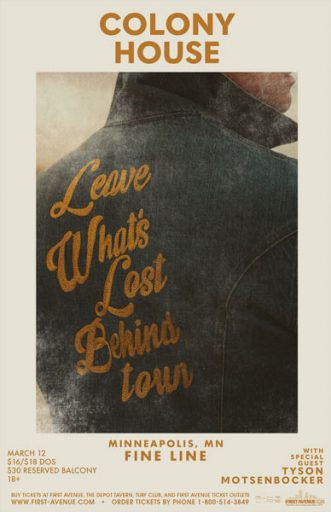 Picture the quintessential rock band. Maybe they’re standing on a grimy street corner with their arms crossed, looking tough, or maybe they’re goofing around in a sunlit field. They could be wearing motorcycle jackets or cowboy shirts or feather boas. They might sound austere and angry or epic and stadium-ready. But what they have in common, regardless of aesthetic, is that they stand together, shoulder-to-shoulder, brothers and sisters in arms. A real rock band is a gang. A group of people united by a shared commitment to what matters in the world, what matters in life, and an insatiable need to communicate that sensibility to anyone else out there who might relate.

It’s this idea – that your band is your life and vice versa – that bonds the four members of Nashville-based rock band Colony House. Frontman Caleb Chapman, drummer Will Chapman, guitarist Scott Mills, and bassist Parke Cottrell are all married guys in their twenties, so they don’t really fit the rockstar cliché: there’s no champagne cork popping or model chasing with this crew. “We always kind of joke – you think people think we’re a cool band?” says Caleb, chuckling. “The joke is that we know we’re not a ‘cool’ band. We’re regular guys.” But when it comes to that most sacred rock and roll thing, where you move on a mission from town to town and stage to stage getting “gnarly and sweaty” as Caleb puts it, in honor of the thing you love, this band has that part down cold. “We’re not sex drugs and rock and roll,” Caleb says, laughing. “We’re just rock and roll.”

Dragonforce, Unless the Archers  – TICKETS 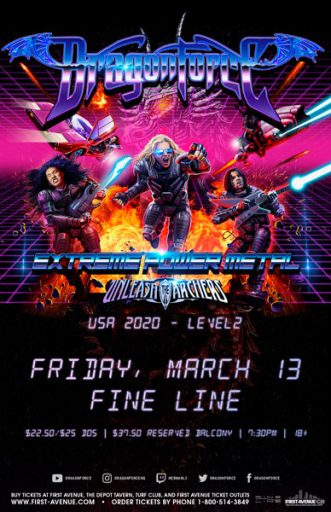 Known as the fastest band in the world, Grammy-nominated extreme power metal band DragonForce is based in London, England. Their platinum-selling record, Through the Fire and Flames, brought them international acclaim and was featured as the most-challenging song on Guitar Hero III. Their energetic and humorous live performances have won them fans on every continent.

Vancouver, Canada based Unleash The Archers span the gap between various forms of metal, with genre-blending as their speciality, the resulting product is a potent mix of intelligent song-writing and technically versatile musicianship. Guttural screams likened to blackened death combined with the soaring wails of a four-octave mezzo-soprano in power-metal style have created a sound unlike anything else in the industry.

Elohim at the Amsterdam – TICKETS 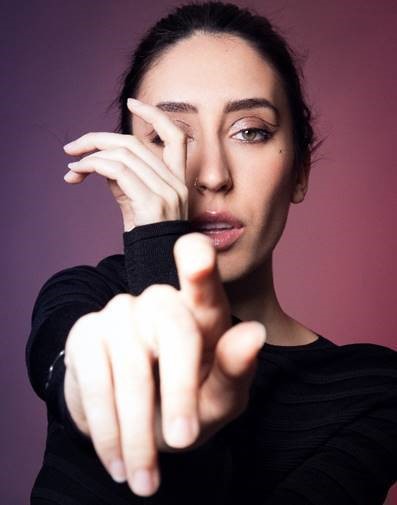 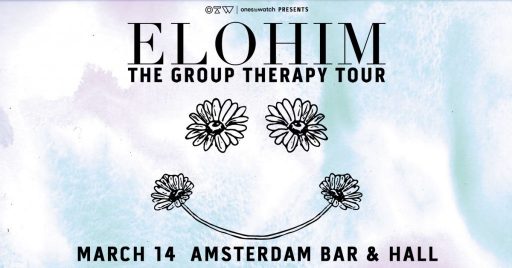 With musical styles that span from inventive electronic and indie alternative to unabashed pop, Elohim’s stunning live shows are set against a backdrop of breathtaking visuals that create an extrasensory experience that will leave you wanting more.

Elohim released her first body of work in 2016, which was followed by a number of singles, collaborations (Louis The Child, Skrillex, Marshmello) and her debut self- titled album in 2018, which includes singles “Sleepy Eyes” “Half Love” and “Hallucinating.”

Her newest project Braindead was released in May, 2019, with music and subject matter that deals heavily with the themes of mental illness.  Elohim donated proceeds from the sales of the EP to mental health initiatives in commemoration of Mental Health Awareness Month and has also gotten involved with the JED Foundation, a nonprofit that protects emotional health and prevents suicide for our nation’s teens and young adults.

Coco Montoya at the Medina – TICKETS

Montoya is revered for his ability to move from subtly melodic guitar playing to slash-and-burn pyrotechnics. Equally forceful are his deep, soul-baring vocals. Years of constant touring, playing unforgettable shows at clubs, concert halls and festivals, have earned him his position at the top of the contemporary blues world. And it all started with a chance meeting in the mid-1970s with legendary bluesman Albert Collins, who offered Montoya a spot in his band, where he stayed for the next five years. Coco was initially hired as Collins’ drummer and later—with Albert mentoring him on the guitar—became the band’s rhythm guitarist. A few years after leaving Collins’ band, British blues star John Mayall heard Coco jamming onstage and was so impressed that he hired him for the newly reformed Bluesbreakers.

Now, with Coming In Hot, Coco Montoya again turns the burners to high and cooks from start to finish. Still an indefatigable road warrior, Montoya continues to tour virtually nonstop, bringing audiences to their feet from New York to New Orleans to Chicago to San Francisco. Across the globe, he’s performed in countries including Australia, Belgium, Switzerland, Germany, Norway, England, Brazil, Argentina, Spain, Mexico, Ecuador, Italy, Poland, Russia, the Czech Republic and Canada. According to Living Blues , “Montoya is a show-stopper…heartfelt singing and merciless guitar with a wicked icy burn…he swings like a jazz man and stings like the Iceman, Albert Collins. He is one of the truly gifted blues artists of his generation.”