So how does one review a burlesque show? Should I focus on the dancing skills of the performers? Their appearance? The degree of nudity? Then I remembered something that Missy Suicide mentioned in our interview the day before Suicide Girls: Blackheart Burlesque blew into St. Paul. “Our goal is to have a really fun, entertaining experience. It should make everybody feel good, it’s impossible to leave the show without a smile on your face.” – Well, that’s a good way to talk about last night, let’s go with that then.
You can check out the full interview HERE

The first thing that stood out as I walked up to the Amsterdam was that many of the crowd waiting in line were women and quite a few of those dressed up as if they planned to be part of the show. The second was that there was zero creep vibe coming from the queue. People were laughing, chatting, and joking; clearly ready to have a good time. Once inside I found that the Amsterdam had expanded to a full-sized show room, clearing most of the tables and it turned out, they needed that extra space as the venue filled up by show time. There was an earlier Meet & Greet for VIP ticket holders as well.

The show started with a J-pop/K-pop inspired number in onesies before bringing an audience member on stage for a brief bit with a plug of SuicideGirls.com. Through the show, the variety of performances touched on many topics both new and classic. A well delivered rendition of “Part of your World” certainly did not have the kid friendly lyrics I remember “Do you want Magnums? I got plenty” Thanks to the pasties the “Game of Thrones” number actually had less nudity then we see on HBO, but still was fun to watch. One of my personal favorites was “Fever” by the Black Keys. I have photographed them playing that song, and Suicide Girls version was definitely more fun to watch (sorry guys). 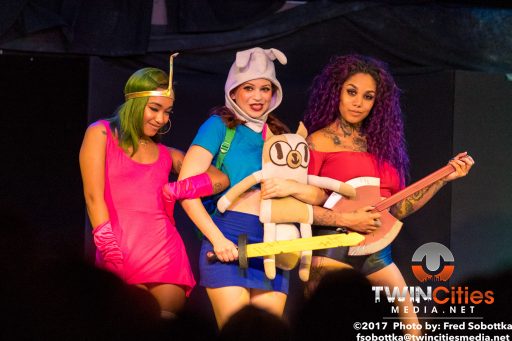 The Audience was involved through the show. Loud cheers, shouts and applause of course. As the stage manager with her phone (someone buy that girl a decent flashlight – NO! you perv, the one that actually emits light) bent over to pick up a piece of artfully discarded wardrobe a female voice rang out from the crow “That Ass though!!!” Fans were pulled on stage through the show for lap dance lessons (which of course had to be performed by the male half of the couple), a reading comprehension (hint he was successfully distracted) and a mass twerk contest at the end. MC Sunny Suicide kept up a cheerful naughty banter with fans through the set 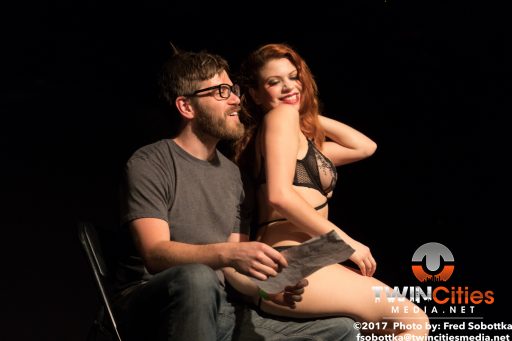 What struck me was the good natured, raunchy mood through the show. It certainly was not politically correct (just the thought sounds quite boring), it was not about sex but rather being sexy, it was not clean, and it was not seedy. It was about celebrating women and having a good time. And just like Missy promised – everyone left with a smile on their face.

Face To Face wasn’t even really on my bucket list. Honestly, I thought I had missed my chance to see them live and I had come to terms with that. Sure, I was bummed out […]

The last time I made the trek into Dinkytown for a show at the Varsity Theater, there was over a foot of snow on the ground and I was greeted by a lob line of […]

Atmosphere welcomes the Palace Theatre back to Minnesota

When the historic St. Paul venue, the Palace Theatre, announced that it was going to be opening its doors again after 32 years, it made perfect sense that Twin Cities’ hip hop pioneers Atmosphere would […]