Styx took over the Mystic Showroom with an outstanding performance that was filled with all the greatest hits. The performance unveiled to a standing room only crowd. Those fortunate to be in attendance did not expect such a phenomenal performance from an almost 2 hour set.

As the band hit the stage and the lights lifted the darkness, the crowd also rose from their seats to the opening of The Grand Illusion. With a roar from the crowd, fans danced at their seats and in the aisles, the crowd quickly joined Lawrence Gowan in the singing while Tommy Shaw, James Young, and Ricky Phillips played their guitars and traveled the stage side to side visiting with the crowd packed at the edge of the stage. 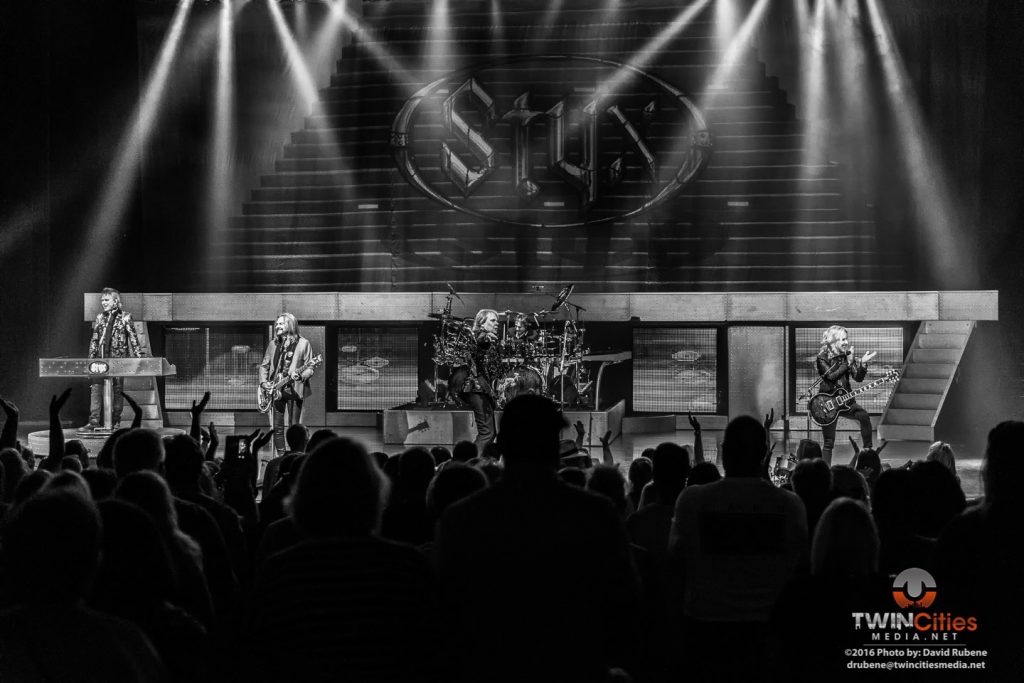 Tommy welcomed the crowd and thanked them all for coming out to the show and supporting the band for the past four and a half decades as they broke into Too Much Time On My Hands. The audience, still standing and singing, joined Tommy and James in clapping their hands to parts of the song. 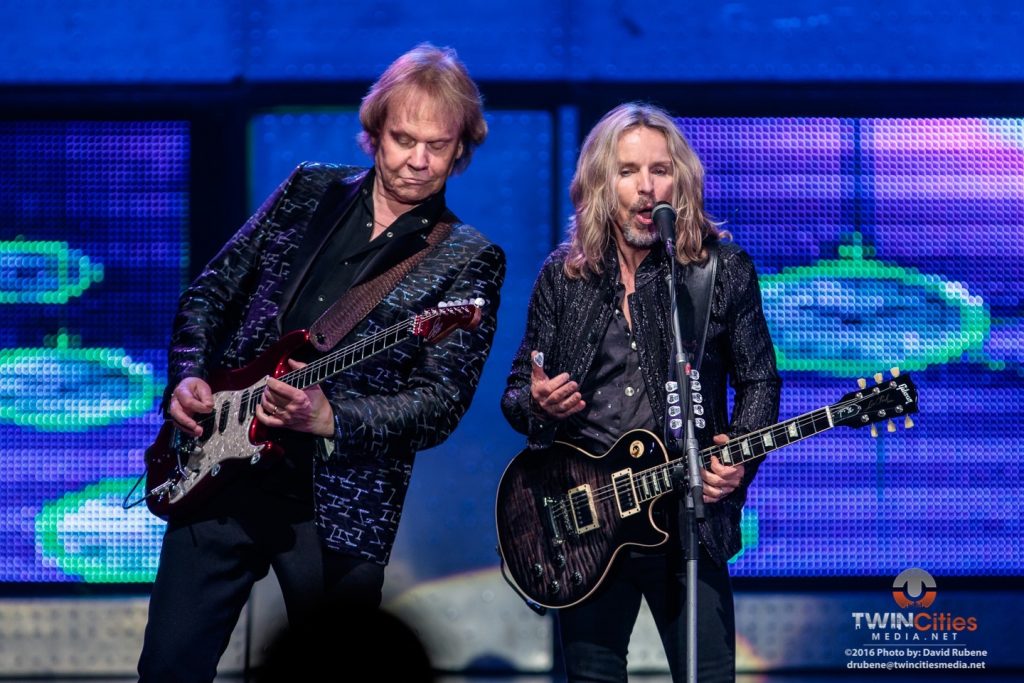 When Lawrence started playing his piano, the crowd instantly recognized the notes and cheered as he began serenading the first verse to Lady. The crowd sang along and cell phones waved in the air as they swayed back and forth to the rhythm of the music. As the tempo picked back up, Tommy, James, and Ricky joined forces at center stage playing their guitars and throwing guitar picks out into the crowd. Lawrence, on his spinning piano, often turned around playing the piano backwards. 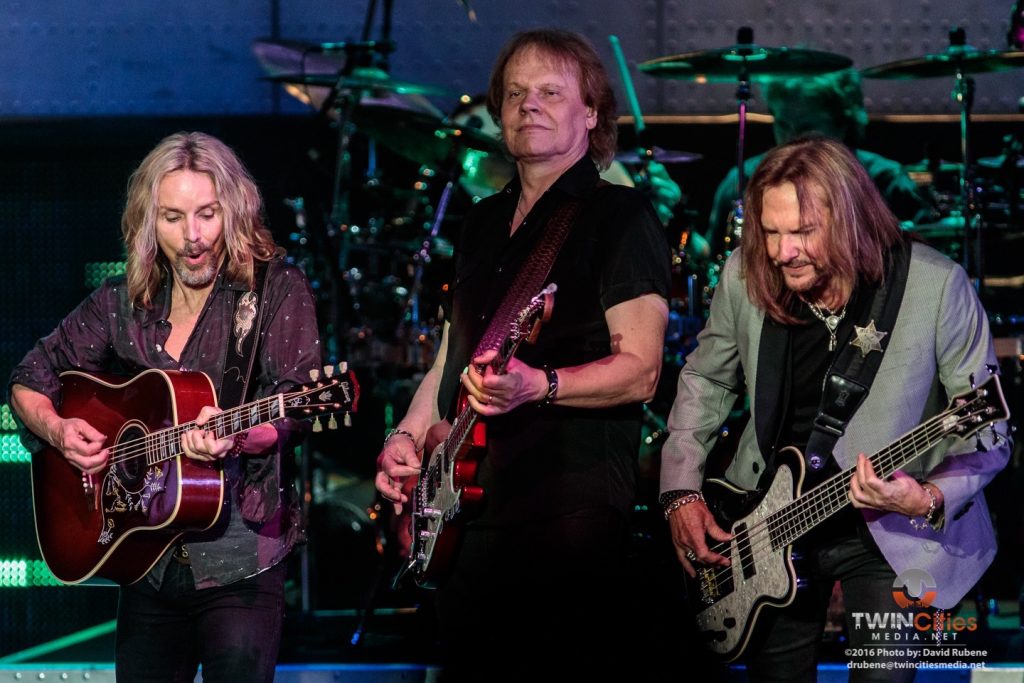 Although the band came together in the early 1970s, it wasn’t until 1977 that Styx made a name for themselves. They were the first band to score up four consecutive triple platinum albums in a row starting with The Grand Illusion in 1977 running through to Paradise Theatre in 1981. Today, the band is made up of Tommy Shaw (guitar and vocals), James “JY” Young (guitar and vocals), Ricky Philips (bass and vocals), Lawrence Gowan (keyboards and vocals), and Todd Sucherman (drums). Their 2016 tour is following their current double disk release, Regeneration Volumes I & II, a collection of 13 Styx classics that also includes a new song and one from Tommy’s days with Damn Yankees. Most of the classics came during the period of those four significant albums.

James joked with the crowd saying they were the most popular when Gerald R. Ford was President of the United States. He also spoke of the first lady, Betty Ford, and joked that we all know why we know her, referring to the drug and alcohol rehabilitation clinic she founded. He then spoke how doctors once told him he needed to change life direction as his partying was killing off what liver he had remaining.He continued saying that he knows everyone likely had a cell phone and asked them to get their them out and Light Up. At the conclusion of the song, Tommy explained that while he loves the sea of cell phone lights, had they existed back in the day, he never would have written the next song, Man In The Wilderness. 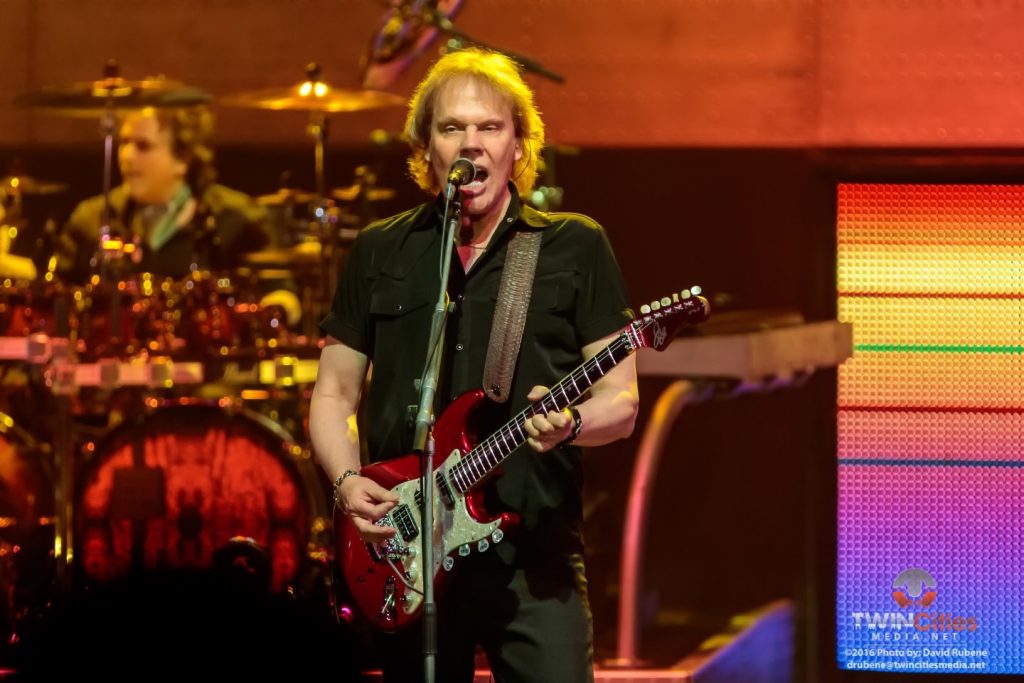 Showing their respects to the recently deceased David Bowie, Tommy with his acoustic guitar played Space Oddity and had the crowd sing back to him. After a quite sentimental moment, Tommy announced that everyone needed to get up out of their seats and rise for the playing Blue Collar Man (Long Nights). In between singing, Tommy hooked up with James for guitar solos throughout the song while Ricky moved to the upper platform across the back of the stage overlooking Todd and his behemoth drum set. 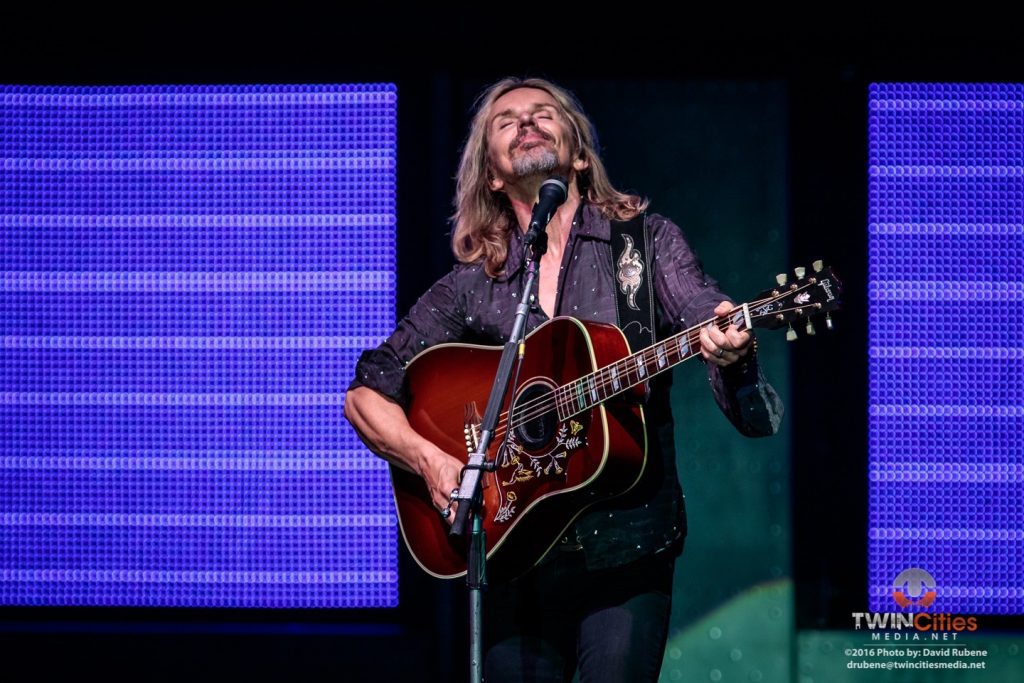 The band closed their set with Come Sail Away, while the crowd excitedly sang along. Lawrence dropped down off his piano raiser and sang as he walked the front of the stage making sure everyone was standing and singing along. When the song ended, the guys left the stage with the crowd wanting more. 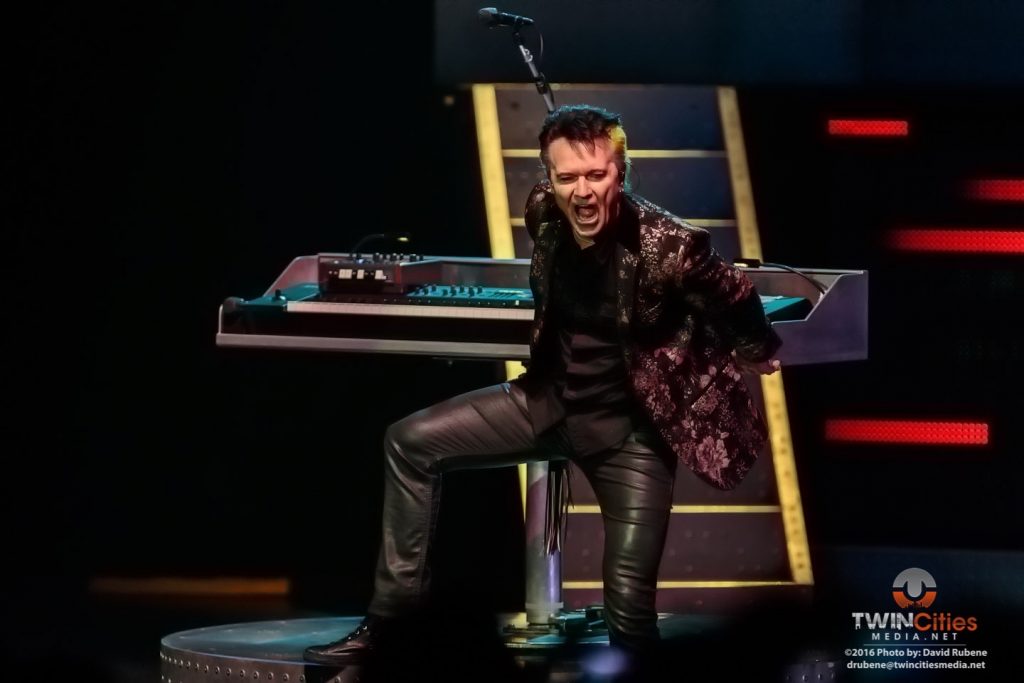 After a brief moment, Styx reappeared on stage ready to give the crowd more of what they wanted. As Todd kicked up a beat and Tommy, James, and Ricky struck a chord to Rockin’ The Paradise, confetti shot out over the crowd from both ends of the stage. The crowd roared as all three guitarist traveled the stage from one end to the other playing guitar solos while Lawrence, sporting a top hat, sang along with the crowd. As the song progressed, Tommy joined Ricky on the rear upper platform to play another solo. 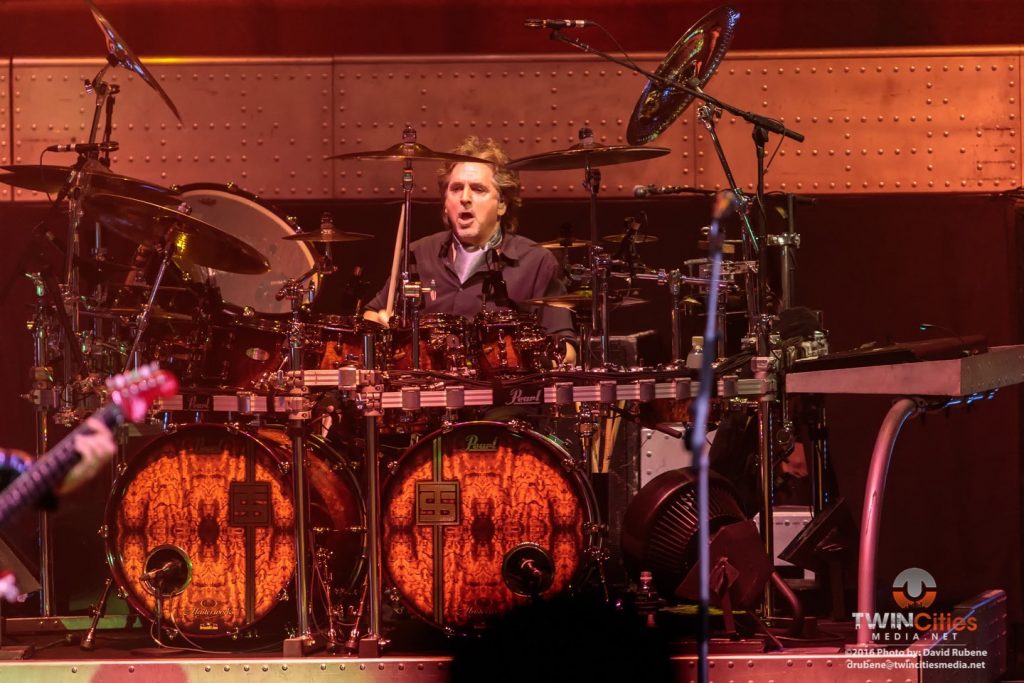 The show came to a close with Tommy singing Renegade, while he and James jam back and forth in a battle of guitar talents. At the conclusion, the band received a standing ovation as the crowd swarmed toward the stage to be able to catch a hand shake.

Their performance was an example of why their careers have lasted as long as they have. The guys in Styx appear to have fun on stage and feed off the energy of the crowd, while they interact amongst each other. In their many solos, the talent of each player is evident, as is their effort to keep the crowd entertained and on their feet.

With songs that have been passed on from generation to generation, the age of the Styx fan base continues to expand as grandparents are now being joined by their grandchildren, something sure to keep the Paradise Theatre open for a many years to come!

On a very quick rise to the top, Kaya Stewart has become an artist of focus on this years Vans Warped Tour. Armed with a golden voice and strong front person qualities, Kaya brings to […]

Ministry Returns To The Skyway Theatre On 11/27

Even after nearly 40 years of Ministry, Uncle Al still has to a lot to say and it comes as no surprise that he has plenty to be angry about. Ministry set out on another […]