Starset brings their 2019 Divisions Tour to the Varsity Theater on Sunday October 20th at 6pm. Doors open at 5pm for this 15+ show. Opening bands are Palisades, Hyde, and A Brilliant Lie. Starset describes their shows as “live demonstrations” rather than concerts as they perform an interactive audio-visual experience based on a fictional sci-fi storyline. This is a show you don’t want to miss. Tickets are available HERE.

Visionary media collective STARSET have carved out a unique path as part cinematic rock band and part conceptual storytellers, weaving an intricate narrative through multiple mediums and redefining the concept of a truly immersive entertainment experience.

Led by enigmatic audio alchemist and PhD candidate Dustin Bates, the band have made it their mission to take fans on a truly integrated journey, not only through music but through video, AR-integrated performances, Marvel graphic novel “The Prox Transmissions,” and online experiences, blurring the lines of science, fact, and fiction.

STARSET’s debut Transmissions was a landmark album, selling in excess of a quarter million combined albums, streams and downloads, and propelled by singles including the unforgettable “My Demons” (which spent an unprecedented 43 weeks scaling rock charts). The band has amassed combined sales of over half a million copies of Transmissions and Fearless debut Vessels, over 100 million streams worldwide, and a staggering 1.4 BILLION aggregated YouTube views.

In addition to shattering convention on record, STARSET’s live “demonstrations” are slaked on that same alloy of ambition, technology and raw emotion. With over 300 shows logged to date, Bates and his helmeted-and-pressure-suited crew (bassist Ron DeChant, guitarist Brock Richards and drummer Adam Gilbert) have distinguished themselves touring with the likes of Breaking Benjamin and In This Moment, while igniting audiences on major US festivals including Rock On The Range. However, it was four planetarium performances in 2015 including Boulder, Colorado’s Fiske Planetarium and Long Island, New York’s Vanderbilt Museum Planetarium that brought STARSET’s live promise into laser-enhanced, telescopic focus.

With the recent release of their third album, Divisions, STARSET is poised to ascend into a new strata. 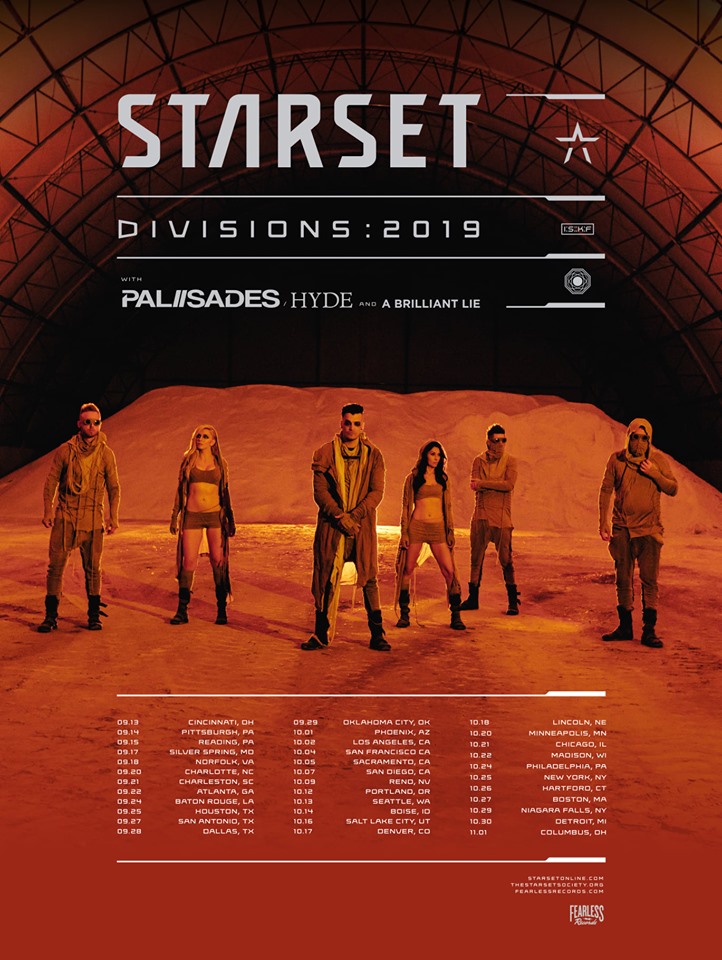 Channeling the melody and fury of bands like Deftones and Linkin Park into a crunching, breakdown-heavy sound, New Jersey-bred post-hardcore outfit Palisades balance heavy aggression with accessibility similar to contemporaries Bring Me the Horizon. Palisades burst onto the active rock scene last year with the release of their explosive self-titled album. The album featured the radio hit “Let Down” which landed the band on tours with Nothing More, Jonathan Davis of Korn, Starset. Palisades have found a way to build upon their sound in a way that is sure to satisfy old fans, while also exciting new ones. Palisades know who they are, and are entirely comfortable in their skin.

Hyde, Japan’s most prolific rock artist, is the lead vocalist for two of the most popular Japanese rock bands: L’Arc~en~Ciel and Vamps. Throughout his career so far, Hyde has recorded more than 300 songs, with 60+ songs breaking the Oricon (Japanese Billboard Chart) top 10. Still active with L’Arc~en~Ciel, Hyde took a break from Vamps in early 2018 to reinvent himself yet again as a solo artist, releasing 4 new singles back-to-back: “Who’s Gonna Save Us”, “After Light”, “Fake Divine”, and “Zipzang”. Hyde shows no signs of slowing down with his 12th single “Mad Qualia” scheduled to be released on March 20th, 2019, a World Tour just announced to be starting in Asia in March 2019, and a US tour on the books for May 2019.

Hyde’s new album, anti, his first solo album in 13 years, in now available on digital services worldwide, giving fans an intense, high energy primer before his 2019 U.S. tour which launches this week. The long-anticipated album features previously-released singles “After Light”, “Set In Stone”, “Mad Qualia”. Singing the whole album almost entirely in English, the performer has been lauded by Rolling Stone and Billboard. The CD comes out in Japan on June 19 from Universal Music. Hyde will visit 13 cities including headlining the recently announced Japan Night on May 12 at PlayStation Theater in New York City, and several headlining shows in Chicago, Boston, and Los Angeles on May 26 at Club 1720.

A BRILLIANT LIE is an explosively-energetic alternative rock band from Orlando, FL.  Alongside relentlessly touring the US in support of their current record cycle, the band are working alongside reputable producer, James Paul Wisner (Paramore, Underoath, Hands like Houses) writing and recording their new material.

Having received airtime on many of the Southeast’s largest Clear Channel and college radio stations, they’re no strangers to the acclamation of the mainstream. Performing alongside the likes of Anberlin, Minus the Bear, Passion Pit and other renowned acts has propelled them to headline performances at the world famous House Of Blues, State Theatre, Freebird Live and numerous sought after music festivals including Sunfest, Florida Music Festival and Rocklahoma.  If they aren’t touring in a smelly van, they are probably out giving high fives. Catch A BRILLIANT LIE this year. The hype is REAL.

Robert Cray Completes A Perfect Night At The MN Zoo

Wednesday night was a perfect night for an outdoor concert and the venue was perfect – the Weesner Family Amphitheater. Add Robert Cray and you can’t ask for a better night. This concert was the […]

Oh Wonder will be making a stop at First Avenue on Friday, June 3rd, 2016.  Oh Wonder, a London based alt-pop duo, have been touring heavily since releasing their self-titled debut album one year after […]