You’ve already purchased your Soundset tickets, right? If not- get on it! Minneapolis’ favorite festival is coming back to the State Fairgrounds next Sunday 5/27.

Soundset is an indie hip hop festival put on by Rhymesayers Entertainment that has been starting in 2008 at the Metrodome Parking Lot  Since then it has continued to grow each year moving first to Canterbury Park and then finding a new home at the State Fairgrounds a couple of years ago. That move put it back closer to its urban roots and added a whole other dimension. With the Rhymesayers artists forming the core, Soundset always presented a great mix of national headliners, local talent and “up and comers” from the hiphop scene.

This year’s lineup includes huge, nationally known performers like Logic, Migos, and Wu-Tang Clan. You can hear “Icon” live by the icon himself Jaden Smith, party with Prof, or see the legendary Ice-T somewhere other than your TV screen. And, of course, Minneapolis’ own Atmosphere will be performing an epic set, as they always do. That’s just a tiny sampling of the lineup! If you haven’t yet, check out the rest below 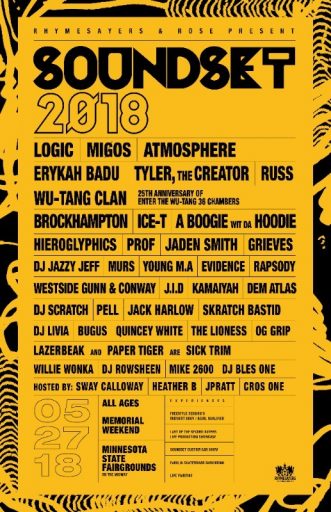 The event starts bright and early at 11AM next Sunday provides nearly 12 hours of nonstop live music. In addition to live performers and DJs, there will be live painting, food trucks, a skateboard showdown, and a super impressive custom car show. There are before and after parties at several other venues including of course First Avenue’s Mainroom.

People have traveled from all around the country for years to attend Soundset, and word on the street is that this year’s festival is the last one that will ever go down. If there was ever a time to treat yo’ self for the weekend, this is it! VIP tickets are sold out but there are still some General Admission tickets HERE

Portugal. The Man Warms Up The Twin Cities With Two Sold Out Shows At The Palace Theatre

Portugal. The Man is one of those bands that I’ve been seeing live for years but never get tired of. They’re not a band that I always remember to put on my “TOP FAVORITE OF […]