Despite the impression we may have gotten from the (hopefully) final, final Motley Crue show at the Xcel earlier this week, it is possible for Rock Bands to mature gracefully. Case in point: Social Distortion.

The 5 piece punk rock band out of California is on tour celebrating the 25th anniversary of their first gold album by playing it in it’s entirety. Just having played Sturgis, Social D packed First Avenue. Most of their fans seem to have mastered life, as was evident in the boy-band sized (but not boy-band prized) merchandise booth.
Fans also have worked on their beer carrying skills judging by the number of people carrying 3-4 beers to their friends in the crowd. 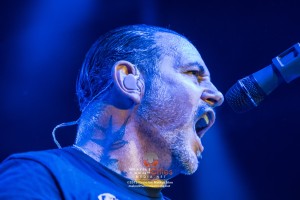 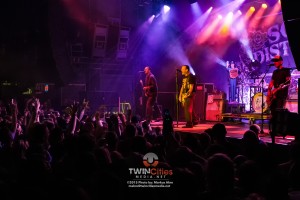 Judging by the number of novelties on stage, Social D stopped at quite a few antique stores on their way from Sturgis. They took the stage to the opening bars of the Rolling Stones’ “Sympathy for the Devil” and let loose with “So Far Away”. The band sounded raw and crisp at the same time (that’s crisp in a good way). Front man Mike Ness’ vocals sounded great once I got out of the photographer’s pit. I guess nobody sound checks for some dude standing 2 feet away. Energy in the audience was great. There was singing along, mini-moshing and plenty of raised fists. Ness reflected on the 25 years since their iconic album and how life has changed for many since then. He also gave kudos to First Avenue and their staff, thanking them for their professionalism in the many years Social D has played there.

Lights were very nice. First Ave has gotten a handle on their brand new lights very quickly and the combination of house lights with Social Distortion’s lights, which included to spot lights working from the balcony, worked quite well. All in all this was a memorable show and hopefully we are many years from Social D’s retirement from touring.

Set List:
So Far Away
Let It Be Me
Story of My Life
Sick Boys
Ball and Chain
It Coulda Been Me
She’s a Knockout
A Place in My Heart
Drug Train
Cold Feelings
Wild Horses (The Rolling Stones cover)
Alone and Forsaken (Hank Williams cover)
This Time Darling
Gimme the Sweet and Lowdown
Encore:
Ring of Fire (Merle Kilgore cover)

Thursday night, the iconic St. Paul venue – The Turf Club – played host to a slew of great bands, some bands with local ties, others no local ties but somehow felt right at home […]