After spending my Thursday night in a cloud of pure nostalgia, I figured why stop after just one night. She Wants Revenge is one of those bands that I obsessed over for a solid couple of months when I was younger. Their industrial sound was heavy and intense but also calming and comforting in a way. I went through many phases growing up and my industrial phase, although short lived, left me with an appreciation for the genre that has yet to go anywhere. Sure, there were a million other shows going on last night (like always) but I wanted something I hadn’t seen in awhile and that drug called nostalgia was calling my name.

Mykki Blanco kicked off the show a half hour after the advertised start time (okay, I was a little annoyed but that extra half hour gave me a chance to catch up with a friend I ran into that I hadn’t seen in years so it ended up working out perfectly). I’m not sure what I was expecting as an opening act for She Wants Revenge but what Mykki Blanco served up was definitely not it. Mykki took the stage and instantly captivated every single person in the venue. The drag inspired, riot grrrl infused, hip-hop/ DJ based, all out amazing set left me confused but in the best possible way. With an apparent aversion to the stage, Mykki spent most of the set out in the audience. With the audience forming a circle around the performer, a bit of a dance off was created while powerful and poignant lyrics blasted through the speakers.

The vibe in The Varsity during Mykki’s set was one of those vibes that I wish I could stuff in a jar and open up when I was having a bad day. Although it was obvious that many patrons were caught off guard by the style of Mykki’s music and set, everyone was clearly having a great time dancing and smiling throughout the half hour opening set. The people around me all had phones out trying to snap a picture or quick video to send out to friends and every caption that I saw posted with said pictures or videos would look something like “Guys, seriously. Check Mykki Blanco out. This is amazing!” It made my heart warm and fuzzy. I’m all about bi-polar line-ups for concerts. I hate when I go to a show and see three bands that all pretty much sound the same perform. That definitely wasn’t the case last night. Mykki’s intriguing set had me forgetting all about the other three shows I had wanted to go to last night. I was more than content with where I was and that really says something when this show was up against the Captured! By Robots show happening downtown (literally a band made up of a dude and three robots). 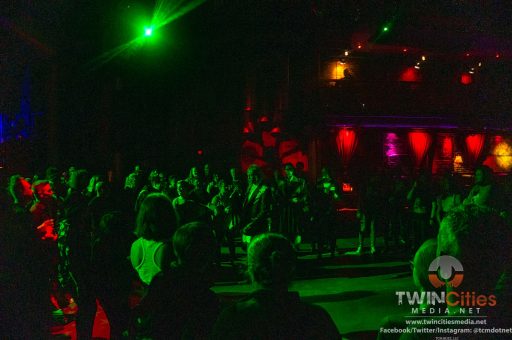 As amazing as Mykki Blanco’s set was, it was clear that people were ready for their chance to see the one and only She Wants Revenge. Since 2004, this California bred band has been bridging the gap between industrial, gothic rock, garage rock and everything in between. Their sound is distinct and, as I mentioned, comforting. Although it has been years since I’ve listened to them, the second I heard singer Justin Warfield’s voice a smile crept across my face because it felt and sounded like home. The sound of his voice mixed with the pumping bass and drums and everything else that makes She Wants Revenge She Wants Revenge instantly transported me back to my room at my dad’s house.

Although they only put out three albums and a few singles here and there, SWR seems to have a bit of a cult following. I watched in amazement as majority of the crowd sang along to every single word of every single song the group performed throughout their nearly hour and a half long set. Although I wanted to be a part of that so badly, standing off to the side and watching it all go down was just as good. SWR doesn’t come around much and you could feel that these fans had just been waiting and counting down the days until their chance to see this group live. I may have only been able to sing along to two or three songs but you best believe I took advantage of those moments. After grabbing a couple of pictures from the photo pit on the side of the venue (Okay, attempting may be a better description. The lack of lights made it next to impossible to grab worthy pictures) I threw my camera in my bag and joined the rest of the audience in the middle of the floor. It was one of those shows where I just wanted to let loose and that’s exactly what I did. I stood there letting myself get completely lost in the atmosphere and the music.

Usually I talk about the whizzing lights that set the stage for any given show but there was none of that on Friday night. The lights were stagnant and the audience was pretty chill. It was literally just you and the music which, although a bit different compared to what I’m used to, it definitely worked for this type of music. The music of SWR is definitely on the darker side with an almost constant drone sound throughout their songs so the dark venue and lack of whizzing lights seemed to match the music. Also, don’t take my mention of the lack of whizzing lights as a lack of energy. Much like during Mykki Blanco’s set, there was plenty of energy throughout the venue as SWR powered through their lengthy set.

Like usual, there were a million shows to choose from last night and, like always, I had to make a decision. My gut told me this show was the one to pick. Always go with your gut.

ERX Off-Road Nationals Burns Up the Track at Elk River

When I was given the opportunity to shoot the ERX Off-Road Nationals Revs at Elk River, I couldn’t wait to get up close to the loud, fuel burning monsters tearing around a track.  Well, the […]

The Wombats at the Varsity Theater 5/6/15