I must have missed the memo that declared this week “Super Fan Week”. First I covered Morrissey who walked on stage wearing a robe and halo judging by the reaction of his audience. Then on Friday it was LA band Say Anything. Their fans know every single word for every single song! Promoting their 2014 album “Hebrews” their current tour adds a string quartet to their lineup.

Say anything was formed in 2000 by front man Max Bemis who is the only member left from the original lineup. Reading through their entry on Wikipedia I learned a new word used to describe their lyrics: catharsis – the process of releasing, and thereby providing relief from, strong or repressed emotions. Watching the crowd, that process is definitely happening. From the opening tunes of “John McClane” the crowd was singing along. The stage was set with a large open space in the middle with musicians of the to side. Bemis used every inch of that real estate usually being close to the edge of the stage leaning out towards his fans. To keep us photographers entertained the mike cord was extra long and dragging through the pit. 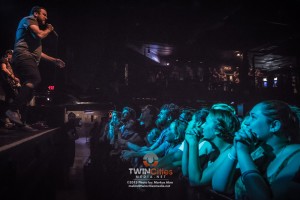 As the show progressed the audience got even more lively with some surging in the crowd. In an interesting side note a blind fan was dancing towards the side of the crowd and folks were quite respectful in giving him some space. Here’s to good Midwestern manners! The string quartet enriched the bands sound nicely. Overall Say Anything delivered a great set that gave their fans more release than most therapy sessions.

Set List:
John McClane
Skinny, Mean Man
Hate Everyone
Woe
Judas Decapitation
That Is Why
Eloise
Spay Me
Kall Me Kubrick
Wow, I Can Get Sexual Too
The Shape of Love to Come
But a Fleeting Illness
Goodbye Young Tutor, You’ve Now Outgrown Me
Do Better
The Stephen Hawking
Encore:
Nibble Nibble
Ahhh… Men

The older I get, the more old school heavy metal makes sense. I really haven’t spent time listening to all of Iron Maiden’s discography and ‘Warpigs’ is probably the only Black Sabbath song I can […]

What’s Better Than An Intimate Tokyo Police Club Show? Nothing

I probably did no less than a hundred double-takes to make sure I was going to the right venue on Wednesday night. I mean, don’t get me wrong, I was stoked to be at the […]

The Starfolk brought their melody-rich chamber pop music to The Icehouse on Friday. Fronted by singer/guitarist Brian Tighe (The Hang Ups, The I wls), their methodically rich pop rock sound pulls you in and leaves […]