Don’t miss Saving Abel at the Stout Ale House on Thursday April 25th.  It’s worth the 60 mile jaunt straight east on I94 to see a big time band in a small town venue.  Get to the Stout Ale House early for your pre-concert dinner and drinks at their sports bar.  And stay late and bowl a few games after if you are not ready to call it a night after the concert.  In between see what should be a great concert with plenty of songs you know by one of rock radio’s staples, Saving Abel and their special guests, The Outfit. This is a 21+ show. Doors at 6pm. Music at 6:45pm.  Get your tickets HERE.

Since 2008 Saving Abel has embodied the definition of “Southern Rock.” Even before their self-titled debut LP, they were barnstorming the country gaining fans and momentum. Simple, down home, charming, country-boys with immeasurable talent that was destined to take them straight to the top.  Their first single, “Addicted” did just that, reaching number one on several charts and the follow-up singles “18 Days” and “Drowning (Face Down)” helped sell over 750,000 copies of their debut album. They toured heavily in support of this album, playing with Buckcherry and Avenged Sevenfold, and later with Nickelback. Night after night, the boys would go back to the bus with their ears ringing from 15,000 fans screaming their lyrics.

Knowing that they would need something great to follow up with, the boys set out to write their sophomore album, “Miss America.” Topping the Active Rock and Hard Rock charts yet again with “Sex is Good” and “Stupid Girl (Only in Hollywood)” solidified Saving Abel’s place both on the radio and live. Setting out on their own for touring this time, Saving Abel headlined theaters around the country for almost 2 years non-stop. They toured with several artists and made a lot of friends along the way, but always kept their focus on the fans, and their eyes toward the future. Not wanting to fall into a rut of making the third album sound like the first two, Saving Abel returned to their Mississippi origin, adding a depth and soul that can only come from their country roots. Using banjos, mandolins, and a healthy helping of moonshine, Saving Abel went into the studio with a mission to stick with “what they know best,” and wrote an emotional, soulful record that was still rooted in rock-n-roll, but highlights their classic country roots.

From day one, Saving Abel, has been an incredible supporter of the amazing men and women in the U.S. Armed Forces. “18 Days,” “Drowning (Face Down), and “Miss America” were all written and dedicated to the US Military. Since 2009, Saving Abel has had the honor of traveling to play for the troops in some of the most remote and dangerous places in the world. …Iraq, Quatar, Cuba, Japan, and India just to name a few. No matter where they are or what they are doing, the boys in Saving Abel will ALWAYS stop what they are doing to acknowledge and thank our military.

In the spring of 2013 Saving Abel, found themselves at a crossroads…. The Active Rock market was stagnant, and metal and pop acts were starting to dominate the charts. The country boys from Mississippi had a decision to make, rather than sit and wait for the industry to take a turn, Saving Abel decided to take matters into their own hands. They hired a new team (management, agent, road crew, and promotional staff), and set out on an acoustic tour with no agenda other than to play music together for the love of it. During that tour they released a new EP, “Crackin’ The Safe” on their own label “Hell No Pickin”. A new attitude brought a fresh perspective and desire to honor their fans by doing nightly meet and greets, radio station visits & off night acoustic shows.

In January of 2014 the band embarked on a new chapter, as singer Jared Weeks and drummer Michael McManus left to pursue solo careers. Saving Abel, found Trash the Brand singer Scotty Austin and drummer Steven Pulley and asked them to join the band. Knowing that a lead singer change could have dire consequences, Austin immediately took to meeting every fan at every show and established that he was not just there to fill someone’s shoes. He was there to create his own identity and relationship with the fans and take the band farther than they’d ever been.
Jason Null (guitar), Scott Bartlett (guitar) and Eric Taylor (bass) welcomed Steven and Scotty with open arms, and together the five of them have a renewed sense of purpose, which translates to an exciting energy both on and off the stage. In November of 2014 Saving Abel released their fourth studio album and first to feature Scotty Austin on lead vocals. Blood Stained Revolution quickly climbed to the top of the charts and established the new band as here to stay! 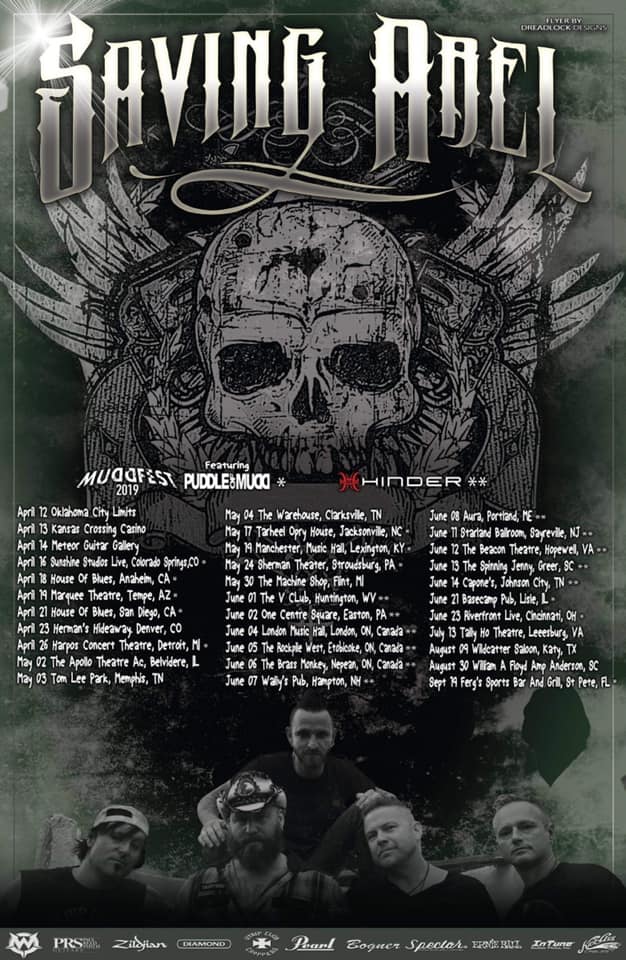 Nothing More Sells Out Music Hall MPLS And Brings The Energy

It was nice to finally be back at the venue formerly known as Mill City Nights. Although the name of the venue has changed to Music Hall MPLS, some things will never change including the […]

Honestly, I can’t accurately begin to describe the elated feeling I had walking to cover a show when it wasn’t either bitterly cold outside or in the midst of the weekly snowstorm. Even if it […]

Most attend the annual Minnesota State Fair to see the sights, jump on some rides, or even sample a wide array of foods. But a near capacity crowd showed up on Saturday night to catch […]