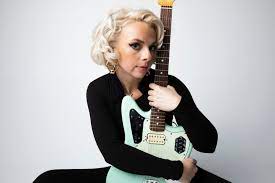 Rock, blues amazing guitarist Samantha Fish will be bringing her band to the First Avenue Mainroom on Saturday, January 15th.  Supporting them on this stop will be Django Knight.

Samantha Fish released her latest album, Faster, on September 10, 2021 via Rounder Records. The follow-up to 2019’s acclaimed Kill or Be Kind, Faster marks Fish’s first collaboration with producer Martin Kierszenbaum (Lady Gaga, Sting), who co-wrote eight of the album’s 12 new songs and helped the genre-defying guitarist, singer, and songwriter to refine her sound and strike out into bold new sonic territory.

“The whole record has a theme of taking charge and taking the reins, in a relationship or in life in general,” explains Fish. “I really thought that after 2020 I’d end up with a really dismal, bleak album, but instead, we came up with something that’s fun and sexy and so empowering.”

Lucinda Williams At The Fitz. Old Cars, Gravel Roads and Ghosts of America.

Begin with a confession.  Despite being a long time Lucinda fan and having her seen her numerous times, I walked into The Fitzgerald Theater Saturday for the first of two weekend performances, with a bit […]

Moss and Gruenling At The Hook. Walking With Giants

Nick Moss is a BIG Man.  Not just physically.  He’s a huge spirit, a reservoir of wit and humor, harbors an enormous love of the blues tradition.  On top of that a prodigious talent with […]