There was a surprise waiting for me at the Saint Motel show “You can be in the pit for a few songs.”

I looked down at my Google Pixel – my toaster-esque camera for the evening – and looked back at the First Ave staff as a tidbit from a photographer friend of mine hit my mind: “if you ain’t in the pit, you ain’t shit.”

“Time to surpass peasantry and become glorious fecal matter!” I thought as I was handed my press pass.

“Alllllright!” I said as I had no intentions of mixing and mingling with the professional photographers. One must consider that these guys and gals usually have cameras worth more than my entire outfit, including my phone and wallet with a card or two totaling a balance I will not be sharing at this point in time; That number only got lower as I found myself dragging my jaw on the floor about an hour or two after arriving at the venue, buying a poster, and calling every loved one I could think of as I walked the city streets of Minneapolis in a complete daze.

So, back to the moment – I ran up to the top level of First Avenue and found a bathroom, a mango WhiteClaw, and no good view of the stage as I herded through the sold-out venue while KOLARS was bringing the house down. The “Desert Disco” duo of Rob Kolar and Lauren Brown was something out of a movie as Lauren not only tapped and pounded the drums and symbols around her, but tap-danced at the same time – on a drum.

Check out KOLARS on any media streaming platform you fancy to get an idea of how the set sounded, but appearance and impression wise: I used to be a fan of Matt and Kim, an indie-duo from New York known for their quirkiness and absurdly entertaining dancing and laughing on stage while they jam; Take that mental image, then imagine them being absolute bad-asses and having absolute bangers instead of indie jams and you have an idea of what KOLARS was like on stage.

I got a chance to find Lauren between sets, learned that her and Rob are married (explains why their dancing and chemistry on stage was so fantastic), and snagged a selfie before Saint Motel was next to take stage. 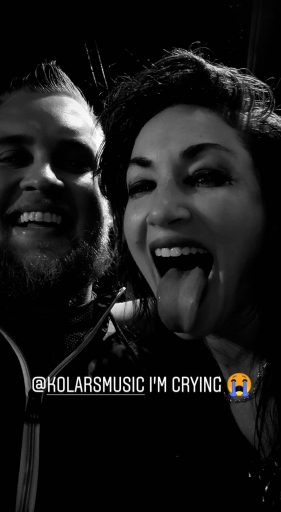 After our conversation wrapped up, I said goodbye to Lauren and turned around to find that the venue was somehow more packed than it was before I took that selfie. At that moment I realized what the pit pass meant – I could be front row with, at least for a few songs.***

I got up to the front, had a moment where frontman AJ Jackson brushed past me as he entered the room with a candle-lit-lamp, discovering with wide eyes the sold-out venue of his hometown, and took to stage and began to create one of my best concert going experiences of all time. I was so close the band that I could read the brand of Dak Lerdamornpong’s shoes, and had my mind absolutely blown away by the brass instruments, outstanding harmonies and anthems alike. I feel like the way I felt during this time was how a lot of rave attendees feel, but I was only feeling the effects of a sparkling mango cocktail and the glory of Saint Motel. My favorites “Sweet Talk” and “Cold Cold Man” were played and I started to smile and cry at the same time – “why does this KEEP HAPPENING?” I thought to myself as I heard the words of the songs coming from not only Jackson but every.single.person behind me in the crowd; I was in heaven.

Eventually we were out of the pit and back among the crowd, as I found myself dropping some of my last dollars until pay-day on a Saint Motel tour poster. In a complete daze, I took out to the streets of Minneapolis and was training my way back to a different side of town to find my significant other who had a show of her own earlier that night, that also… made.. me.. cry…

I need to find a better reaction to beauty and art before I stop being able to cry when it’s more important – or maybe there is no better time to cry? Who knows. More shows to come, more tears to shed, more smiles to burst out as I make my way to the next venue – dreaming for the day that KOLARS and Saint Motel come back to our frozen tundra of Minnesota that we all call “home.”

***Now, as a toaster-bearing-amateur photog, I was not going to let myself get in the way of the professionals, so I stuck to the side as much as possible. 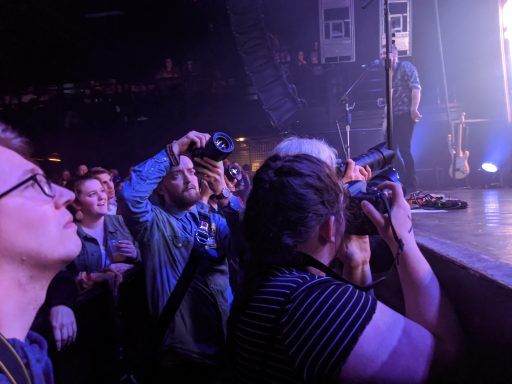 I got some shots of my own, that can be found HERE, but our hero (Vito) got some killer shots.

Metalachi Blows the Doors Off The Turf Club

On Thursday night, Metalachi appeared at the Turf Club in St. Paul. I had heard of Metalachi, but have never seen them live. I watched a few YouTube videos, read a few articles and couldn’t […]

There was nothing modest about Modest Mouse’s set to close 2015 Rock the Garden on Sunday Night. The band 9 band members switching instruments, stage lights that came alive with the dusk and 20 years […]